2013 Baseball Hall of Fame Vote: How Much Do BBWAA's Secret Ballots Matter?

There's been a lot of talk over the last few weeks about the various problems with the BBWAA's Hall of Fame election process—things like the 10-vote limit, the ambiguity surrounding PEDs, and the fact that players magically get better the longer they stay on the ballot. But there is no greater threat to Cooperstown's integrity than the BBWAA's use of secret ballots.

Share All sharing options for: 2013 Baseball Hall of Fame Vote: How Much Do BBWAA's Secret Ballots Matter?

Two years ago, as I was was looking through some Hall of Fame vote trackers, I stumbled upon something curious: the totals from the publicly released ballots didn't match up with the final results. I thought this warranted further investigation, so I crunched some numbers and found that there were indeed some major discrepancies in the voting—specifically, that public voters were more likely to check the boxes for better Cooperstown candidates and less likely to support questionable picks than their more secretive peers.

When I repeated my study following the 2012 Hall of Fame announcement I identified a similar trend. Not only were there major discrepancies in how the two groups of voters judged certain players, but there was a clear relationship between how qualified a candidate was and how differently he was viewed by the two groups.

This year, after the BBWAA announced that it had failed to elect anyone from the most loaded ballot of my lifetime, I sat down with the BBWAA's official list of publicly released ballots (as of Wednesday evening the BBWAA had 102 listed; Repoz' and leokitty's lists have more, but Repoz does not list individual ballots and not all of leokitty's ballots are confirmed as complete) in hopes of finding that something had changed. With so many complex issues on this year's ballot—steroids, the existence of more than 10 reasonable choices, the steady momentum in support we've seen for some longtime candidates—I thought perhaps putting one's name on his or her ballot wouldn't have as big of an impact.

Boy, was I wrong. Regardless of the voters' individual motives for remaining anonymous, as a group those who were willing to put their names on their ballots came to very different conclusions about this year's candidates than those who voted in secret.

Before I get carried away, I should say that the secret ballots did not ultimately change the outcome of the election. Those voters who made their choices public would not have elected anyone either, nor would they have saved any of the 19 candidates who did not reach the five percent threshold to stay on the ballot. But while it may not have mattered in a fatalistic sense, the impact that the option of anonymity has on writers' choices actually got much bigger.

I should also add that my underlying assumption—that secrecy is the causal factor behind the voting discrepancies and not just a symptom of something else—is not unimpeachable. In the past, others have suggested that the two groups just tend to think about the game differently. A retired newspaper editor is less likely to be both attuned to newer statistical methods for evaluating players and eager to publish his ballot online than an active blogger, but that doesn't mean the two characteristics are related. Still, the fact that the BBWAA published these ballots itself hurts the argument that anonymity is merely a function of access.

[Edit: Patrick Bowen suggests that voters might have to manually post their ballots on the BBWAA's website. Perhaps this extra step might deter some writers from sharing their ballots, but still one wouldn't need an active online presence to do it.]

Now that that's out of the way, here's a look at how the top 20 finishers' (i.e., everyone who got more than seven votes) support varied between public and private voters: 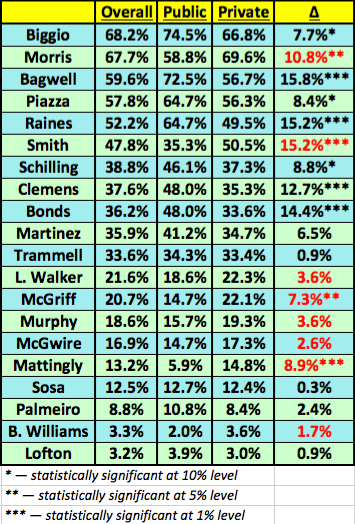 Weeding out the unexceptional cases, here are the players whose vote discrepancies were statistically significant at the 10-percent level (i.e., they would have a less-than 10-percent chance of occurring through randomness alone): 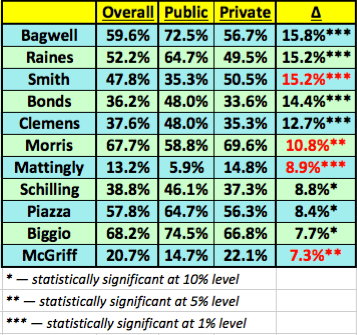 Some of these discrepancies are mind-blowing. Bagwell, Raines, and Smith all saw their vote shares swing more than 15 percent, with Bonds right on their tail—that's a swing of more than a full vote per seven voters. Clemens and Mattingly hit double digits. All told, 11 different players had vote discrepancies that were significant at the 10-percent level, with a 12th (Edgar Martinez) not too far behind.

Ten percent is admittedly a low standard for statistical significance, but even increasing the rigor of the test we still find meaningful results. Bagwell, Raines, Smith, Bonds, Clemens, Morris, Mattingly, and McGriff's discrepancies all hold as significant at the 5-percent level. Bagwell, Raines, Smith, Bonds, Clemens, and Mattingly's all hang on at the 1-percent level, meaning we can be over 99 percent sure that something else is affecting voters' decisions. Bagwell and Mattingly's differences even hold statistical significance at the 0.1-percent level!

We've established with strong certainty that the BBWAA's judgments of certain players vary based on whether writers are willing to put their names on their picks. So what kinds of candidates are assessed differently? The answer: Anonymous voters judge better players more harshly and worse players more charitably.

The public-private voting discrepancies for the BBWAA's top 20 finishers have a correlation with our own BtBWAA Hall of Fame election results of .85, for an R2 of .73—i.e., almost three-quarters of the difference in a player's vote totals could be explained by how deserving he is of enshrinement. Admittedly that isn't a very fair proxy for Cooperstown worthiness, but how about our own Adam Darowski's ingenious Hall Ratings? The voting discrepancies and the numbers Adam cranked out have a correlation of .70 and an R2 of .48. So yes, even before you account for randomness and different voter demographics and ways of thinking, just under a full half of the effect comes from how worthy (or unworthy) a candidate is for the Hall of Fame.

Let me pause for a moment to say that what follows is not a blanket statement that applies to every Hall of Fame voter. At the time of this study were 467 writers who did not allow the BBWAA to release their ballots, and for any individual voter I do not assume to know why he or she did not release his ballot (I should again mention that the BBWAA's list does not seem to be complete), or why he or she voted for whomever he or she voted for, or how responsibly he or she takes his or her duty. This is not targeted at any specific person and I would like to apologize in advance to any BBWAA voter to whom the following statement does not apply.

That being said, there is a third fact staring us in the face that is the logical conclusion of the first two:

Maybe it didn't matter this year, but it very well could in the near future. The very notion that this effect exists offends me, just as I imagine it would for anyone who cares about honoring the game and its history. Few would argue that the 300 men whose plaques adorn the halls of Cooperstown are the exact group who deserve to be immortalized as baseball's greatest legends, but disagreement regarding of who should be a Hall of Famer is a far cry from outright dereliction of duty.

The National Baseball Hall of Fame is a sacred place to all those who love our national pastime, and induction to Cooperstown is perhaps the greatest individual honor in all of professional sports. Those who willfully take advantage of their anonymity to cast their ballots irresponsibly are desecrating baseball's most hallowed halls. And though the majority of writers may treat their ability to vote for the Hall of Fame as the privilege it is, if the members of the BBWAA do not reform the system to stop the corruption bred by their secrecy then they will all be complicit in dishonoring the legends of our beloved game.