The free agent failures of the Tampa Bay Rays

As the 2012 season stretches closer to its finish, I've found myself wondering why one of the best front offices in baseball hasn't been successful with spending big on free agents.

Share All sharing options for: The free agent failures of the Tampa Bay Rays

With less than a week left to go in this baseball season, I've found myself both looking forward to the playoffs and reflecting on the season that was.

There's no way of knowing, today, whether or not Pujols will still be even be an average hitter in nine years, or if Jose Reyes' hamstrings will hold up over the five years left on his contract.

No one has a crystal ball. But what we do know is what actually happened, in 2012.

If we consider just this season, which free agent contract was the worst one given out last off-season?

You could make an argument for bunch of deals, such as, Bell's deal with Miami, Ryan Madson's contract with Cincinnati or either of the Pirates signings of Erik Bedard and Clint Barmes.

In my opinion, the worst free agent signing was the one-year $7.25 million deal that the Tampa Bay Rays gave first baseman Carlos Pena.

The Rays decided to bring him back for the 2012 season. Pena has rewarded them by hitting .202/.336/.363 with just six games left in the season. Pena has been successful during his career despite his low career batting average of .235, because of his ability to draw walks and hit home runs.

Pena's power has been non-existent this season. A .363 slugging percentage for a power hitting first baseman is dreadful and is by far the worst of his career: 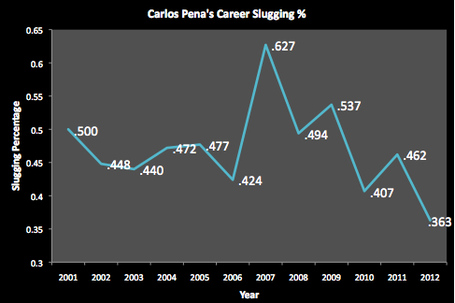 So, the Rays made Pena their second highest-paid player, yet they have received below-average production from him, in a down year for first basemen.

Pena wasn't the only bad signing by Tampa Bay.

Designated Hitter Luke Scott inked the next largest contract from the Rays last off-season; a one-year deal worth $5 million, with a $6 million club option for 2013 ($1 million buyout).

According to Baseball Prospectus' Compensation Tables, Scott and Pena make up almost one-fifth of the Rays 2012 payroll (19.25 percent). Yet, Scott's production has been even worse than Pena's.

The Rays have spent almost 20 percent of their payroll on two players in premium offensive positions, but they've both been below-average with their bats. Pena and Scott have combined for just 1.2 fWAR, this season.

Consider for a moment that the general consensus is a league average MLB player is worth 2 WAR. The Rays spent over $12 million for two players who couldn't combine to even be one league average major leaguer, despite considerable playing time.

Scott and Pena have been worth only 2.8 percent of the Rays WAR total; which is significantly less than the 19.25 percent of the team's payroll that they make up.

The way the MLB contract rules are structured teams end up receiving surplus production (over cost) from players who have less than six years of major league service time. They then end up reallocating this surplus profit, of sorts, to players on the free agent market (6+ years of MLB service). So, the Rays probably did not expect Pena or Scott to be worth 19.25 percent of the team's WAR.

Matt Swartz has shown that MLB teams spend 75 percent of their payroll on free agent-eligible players, but only 30 percent of their production come from those players. If we looked at every major league ballclub as being on the same-level in terms of revenue, than we'd assume that the 45 percent net loss on free agency (or market-eligible) players is just assumed.

That assumption is flawed because Tampa Bay does not operate with nearly the same revenue structure as most MLB teams. They cannot possibly afford to spend 75 percent of their payroll on free agency-eligible players, and they also cannot assume they should get 30 percent of their production from players who fall under that category.

The interesting thing about the Rays situation is that they do an impeccable job of keeping costs low by developing good young players, signing star players to low-cost extensions and finding bargain free agents. Their organization is the star of the baseball world in terms of receiving surplus production from their non-market players.

This fact is obvious again this season, as their two top free agent signings have not worked out, yet they still have had a successful season; with a record of 86-70.

The Rays have had a really good season in 2012, but at the moment their playoff chances are dwindling; which brought about this theory.

Maybe the Rays knew their team was good enough to win 88-90 games, without signing either Scott or Pena. This assumption could be flawed because Tampa has received surprising production from their bargain free agent signings of Fernando Rodney, Jose Molina and Jeff Keppinger.

But let's say for the moment that Tampa Bay knew they could succeed without spending "big" on a new first baseman and DH. Why did they allocate one-fifth of their payroll to those two players, anyways?

Pena and Scott were supposed to be the difference between Tampa making the postseason for the fourth time in five seasons, or falling just short.

Would the Rays be a playoff team right now, if Scott and Pena had produced anywhere close to what they were supposed to? I think so.

Which brings me to my final point, how is it that one of the best front offices in baseball could have money to spend yet fail with their two major free agent signings?

The answer is uncertain, but this isn't the first time that Tampa has made bad decisions with the free agent market.

2008 was Tampa's breakout season. I looked up all of their free agent signings of $5+ million dating back to the off-season prior to '08:

The sample of six free agent signings is small.

Still, only one of the six contracts actually worked out for the Rays.

Soriano's 1.5 fWAR for a reliever was extremely good, Damon was okay (but still a loss in my opinion) and the other four deals are almost distinctly in the loss column.

Free agency, for the most part, is a crap shoot, and with a sample of n=6, maybe it shouldn't be surprising that the Rays haven't had a high success rate.

I'm honestly just confused because their organization is so good at seemingly everything. Especially at signing cheap underrated free agents.

I'd like to hear the opinions of the readers. Why is it that an organization that does everything right, when it comes to cost-control and player evaluation, cannot correctly allocate large-ish portions of their money on the right free agents?

All of the statistical data is as of Thursday September 28th and comes from FanGraphs. All of the salary figures come from Baseball Prospectus. The free agent data came from ESPN's free agent tracker.