The Slow Death of Aggressive Baserunning

A look at the sad, but necessary decline of the "Play at the Plate."

Share All sharing options for: The Slow Death of Aggressive Baserunning

Imagine it's Wednesday, October 14th, 1992 all over again. The Atlanta Braves are down 2-1 in the bottom of the ninth inning of the NLCS with 2 outs. Pirates' ace Doug Drabek is on the mound.

Sid Bream is standing a few feet off second base when a line drive is hit to left field and Skip Caray yells from the television,

"Swung! Line drive left field! One run is in! Here comes Bream! Here's the throw to the plate! He is.... HELD AT THIRD!!"

Not exactly words that will inspire you to go "dance in the streets", are they?

One of the most exciting plays in baseball is the "Play at the Plate", yet, we are seeing less and less of it as the game grows older. In fact, that very situation that Bream made so (excruciatingly) exciting, when the runner scores from second base on a single, has been slowly declining for quite some time now:

Naturally, if the baserunner isn't scoring, he's either being held at 3rd, or he's being thrown out at the plate. A simple breakdown of these events by decade gives us a clear illustration of how things have evolved:

FATE OF RUNNERS AT 2B ON A SINGLE

So it's not necessarily that more of these runners are being thrown out-- as the OUT at HOME rates in recent seasons are very similar to the rates back in the 1960's. But the percentage of runners holding up at 3rd has grown dramatically from 25% to almost 37% in 2010 and 2011.

So what's going on here?

Perhaps smaller ballparks are bringing the Outfielders in and making it difficult for the runner (and the base coach) to challenge the strength of their arms. Or perhaps Outfielders are simply much stronger than they have ever been and baserunners know better. The number of OF Assists per game from the league as a whole has zigged and zagged a bit through the years. But as you're probably aware, the actual Assist itself isn't the whole story-- it's the Fear of the Assist wherein the value lies. 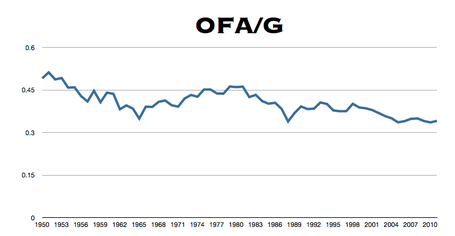 Nothing conclusive there, but perhaps the truth is revealed if we break down the situation a bit more.

With no outs, the runner on second base scored on a single 39% of the time over the last ten years. But, when there was 1 out, the baserunner scored 51% of the time. And with 2 outs, that runner scored 76% of the time. This makes sense, intuitively: the more dire the situation, the more aggressive a baserunner and his coaches become. They are now willing to take that risk.

But with this risk, of course, comes consequence. With no outs, less than 1% of all baserunners were thrown out-- because most of them were held up at 3rd and those that did go were almost certain to be safe. With 2 outs, however, that number leaps to almost four and a half percent. But this wasn't necessarily the case in the 1950's, when runners were still thrown out closer to 2% of the time, even with two outs.

For all your nerdness, I've compiled a year-by-year breakdown of the fate of the runner on 2nd after a single, fully separated by out state, in a google doc HERE, if you're into that sort of thing.

If you're not into that sort of thing, then I want you to consider another factor that may play into all this.

With all the advancements we've seen in strength and conditioning in other areas of the game, it's hard to believe that such improvements are not contributing to less aggressive baserunning as well. But there may be a lot more to it than that. I'm curious to what extent we are additionally seeing a steady, but uniform change in managerial philosophy on the importance of base runners? Are teams simply becoming less aggressive on the bases as the perceived value of the out (and the non-out) grows within baseball management's collective mind?

And more importantly, even with all the logic behind holding the runner -- do you still miss that amazingly beautiful scene of the close play at the plate?

All data courtesy of the excellent people at retrosheet. Includes post-season, excludes 2012.