Compact Rotations, Then and Now

Share All sharing options for: Compact Rotations, Then and Now

I belong to a pretty nerdy Yahoo group comprised of Retrosheet enthusiasts who regularly exchange email to discuss potential errors and discrepancies they've mined from the vast and deep universe of play-by-play data that forms baseball's statistical history. It's a fairly wild and rowdy group of people, and things can get out of hand at times. Obviously I can't go into details -- but let's just say these guys really know how to party and just leave it at that.

A few days ago, one of these party animals asked the group for a list of rotations with the fewest number of different starters by a team in a season. Sean Forman, overlord of Baseball-Reference, was quick to satisfy the inquiry providing a link to his amazing play index tool which you can view HERE.

In the table you'll see the 2003 Seattle Mariners at the top -- amazingly, they're one of only five rotations since 1901 to use just five starters in a single season, and one of just two teams in the past 50 years:

There are currently 45 teams to have finished the season having used only six starters, including two rotations from 2012: the Cincinnati Reds, the San Francisco Giants. Up until this weekend, the St. Louis Cardinals had only used six SP as well. With the return of Chris Carpenter this past Friday, the Cardinals are now bumped up to seven total SP on the season, where they join ranks with the current Nationals and Mariners rotations.

These "compact" rotations seem to be a trend in recent years, and medical and training advancements obviously deserve a great deal of the credit. From 1910-1950 there were just 19 cases where a team used fewer than eight SP in a season. There were 30 in the 1990's, 23 from 2000-2009, and there have been nine from 2010-2012 already, assuming none of the 2012 teams use an additional starter in these final days of the season. 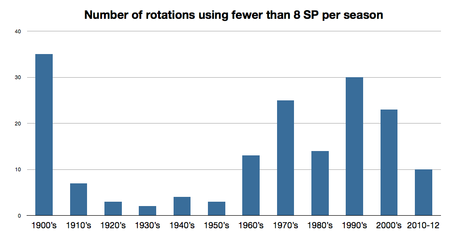 Naturally, along with good health, these compact rotations also require reliability in each individual starter's performance in order to exist. Typically, If one of the starters falters for a stretch of time, their job quickly becomes some other pitcher's job. So we expect these compact rotations to have shiny numbers as a whole.

The 2012 Cincinnati Reds' starters have posted a 93 ERA- to date, with only Mike Leake posting an ERA above league-average. The Giants' starters, meanwhile, have been just a notch better than average this season at a 98 ERA- collectively. These are decent numbers for a rotation, and a lot of teams would love to have that sort of production out of their starters. But compared to other "compact rotations in recent history, the performance of the current Reds' and Giants' starters falls short of what one might come to expect:

Rotations With Fewer Than Seven SP since 1950 (sortable)

Only six of these compact rotations posted worse ERA- numbers than the 2012 Giants. Generally, we'd expect these types of rotations to feature a strong slate of starters, otherwise management finds someone else to pitch. But the Giants are in a rare position of having a starter that they were not willing to replace despite poor performance all season. Obviously, I'm referring to Tim Lincecum, who has had one hell of a nightmare season in 2012.

There had been a discussion amongst Giants management to consider replacing Lincecum in the rotation as early as June, though ultimately Bochy and Sabean decided against the idea. I imagine if Lincecum's +5.00 ERA had been coming from a pitcher that hadn't won two consecutive Cy Young awards a few short years ago, they would have had no reservations about removing him from the rotation. Similarly, San Francisco still owes a sizable amount of money to Barry Zito, whose ERA- of 110 would have likely been replaced under different circumstances as well.

The Reds rotation has been significantly better than the 2012 Giants, but there still have only been eight cases of a compact rotation having a worse mark than Cueto, Latos and company's combined 93 ERA-. I do find it interesting that the Reds don't have a particular commitment to their weakest link with Mike Leake. His salary is still at pre-arb rates, and he doesn't have a history of dominance the way Lincecum does. But Leake's 117 ERA- is dangerously close to replacement level, as evidenced by his 0.3 rWAR over 173 innings so far in 2012. The rare set of circumstances leading to a high ERA for a compact rotation in this case may simply be a lack of a better replacement for Leake. Or it's simply Dusty Baker.

The absolute worst case of this was the rotation for the upstart 1967 New York Mets, who sent twenty different pitchers to the mound to start a game that season.

I don't mean to bum you out on a Monday morning by ending the post with this very depressing list of poor-performing rotations, some of which you might even remember (2004 Rangers, 2006 Royals). So I feel obligated to direct you to the ERA- sort for this last table, where you will find a tiny nugget of hope buried deep within the bleakness.

In that very same year that the Mets gave starts to a record 20 different pitchers, the 1967 California Angels also gave starts to a remarkable 17 different pitchers over the course of the season. But what is fascinating about this particular ultra-non-compact note, is that the Angels rotation still managed an ERA- of 94 despite the revolving door of replacements on the mound. Considering that most of these rotations that used over 16 starters had ERA's at least 20% worse than average, that is a pretty impressive performance from the bench.