A Graphic Look at Playing Above Compensation

Share All sharing options for: A Graphic Look at Playing Above Compensation 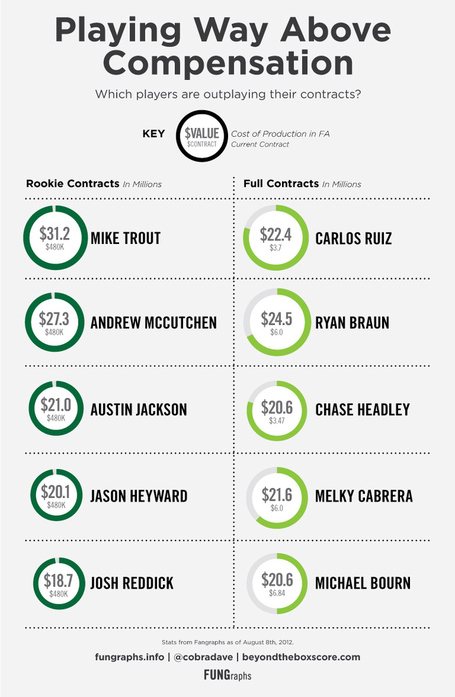 Listening to the Baseball Today podcast from Wednesday, at the 8:38 mark they mention Kevin Goldstein's ESPN Insider ($$$) piece on the worth of Mike Trout. This early into his career, would it be nuts to try to lock him up? No, but it would likely be an inflated price based off of 88 amazing games this year. Although some scouts in that article mentioned he may hit arbitration records in a few years, some might think the Angels would wait to act. From his ridiculous potential ROY/MVP season, some think they may have wanted to go the route of the Rays and lock of Longoria before inflation hits:

"I think they've missed the window to lock him up," he said. "I know he's not going to suck at any point, but he may at least cool off sometime in the next two years and give you a chance to actually compare him to someone else."

The first player I could think of was Andrew McCutchen, who has his money coming from his extension he's signed this offseason. The best deal believe it or not, is Carlos Ruiz, who is signed for only $3.7M this season. In free agency, his replacement value is $22.4M, according to the FanGraphs Dollars metric. Trending a few weeks ago, Chase Headley, with his $3.47M contract this year, is also a tremendous value, as he's playing at the value of $20.6M.

With the exception of Ryan Braun in the right column of the graphic, I expect Headley, Cabrera, and Bourn to be in line to get a pay increase next season.