The Best Lineups to be Perfect Gamed

Share All sharing options for: The Best Lineups to be Perfect Gamed 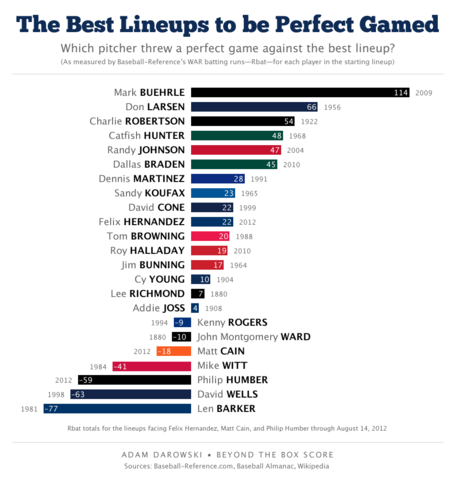 True story. I kid you not.

Just twenty-four hours before Felix Hernandez finished his perfect game against the perfecto-prone Tampa Bay Rays, I had pulled a whole bunch of perfect-game related data for a visual I had been meaning to put together ever since Philip Humber threw his gem.

I thought to myself, "What's the rush? I'll just do this when I have time. Who knows when there will be a perfect game again? It could be fourteen years from now."

I seriously thought that. Twenty-four hours later, I was scrambling to finish my data collection. The visual above shows the best lineups ever to fall victim to a perfect game. I used Baseball-Reference's WAR batting runs for the starters in the lineup for the season in which the perfect game was thrown (so, the totals for the three [three!] 2012 perfect games are incomplete).

Here's my data. Let me know if you see something interesting!