Red Sox legend Johnny Pesky died yesterday at age 92. I've been a Red Sox fan for all of my life— which was only about 37% of Pesky's life. I've been reading emotional tributes to the man and I know I just can't add any more to that discussion. I'll pay tribute to him in the way I know best—discussing his WAR totals.

Pesky's #6 was retired by the Red Sox in 2008, breaking the club's unwritten rule about only retiring the numbers of Hall of Famers. Heck, the Red Sox haven't retired Wade Boggs' #26 or Roger Clemens' #21. They appear to have plans to retire Clemens' numbers, as nobody has worn it since. Boggs, on the other hand, has seen his number worn by eleven players since he gave it back (most recently by Scott Podsednik and most prominently by Lou Merloni).

Looking at Pesky's numbers got me thinking about another Red Sox shortstop with a short-but-incredible peak: Nomar Garciaparra. Here's their Fangraphs WAR chart:

The thing is… Pesky was able to pull that off despite missing three seasons to World War II. In fact, I can't think of anyone who's career may have been hurt more because of World War II.

Pesky came up in 1942. The 22-year old shortstop posted a 6.6 WAR (per Fangraphs, as with all numbers herein) season while leading the league with 205 hits. He then enlisted in the Navy, missing three crucial peak seasons of his career. Pesky made excellent use of the time, both serving his country and meeting his future wife, Ruthie.

Pesky rejoined the Red Sox in 1946 along with teammates Ted Williams (who missed three seasons as well and would later miss significant parts of two seasons to the Korean War), Dom DiMaggio (also gone for three seasons), and Bobby Doerr (who missed the 1945 campaign). The Red Sox proceeded to win 104 games and the American League pennant, losing the World Series in seven games to the St. Louis Cardinals. I'm not going to go into whether or not Pesky held the ball.

In that 1946 season (I repeat, his first playing action after a three-year layoff), Pesky was worth 7.6 fWAR. He again led the league in hits, this time with 208. He led the league once more in 1947, collecting 207 safeties while contributing 4.7 fWAR. In his ten seasons, Pesky totaled 36.8 fWAR, despite contributing just 1.4 fWAR in his final three seasons.

Pesky's career totals had the double-whammy of an incomplete peak and an early exit. While Pesky wasn't the first excellent shortstop to be done at age 34, the years missed because of the War simply are not his fault. How would his career look if we gave him credit for those seasons? In Pesky's case, we have a full season before he left and a full season after he left. We can simpy average those years and distribute the sum across his missed seasons. Now, Pesky was remarkable in 1942 and 1946, so that seems like a generous adjustment to make. But if he was remarkable as a 22-year old rookie and as a 26-year old veteran of three years in the Navy, is it really that big a stretch to think he would have been that good in between? I think it's perfectly fair.

Here's Nomar and the War-adjusted Pesky: 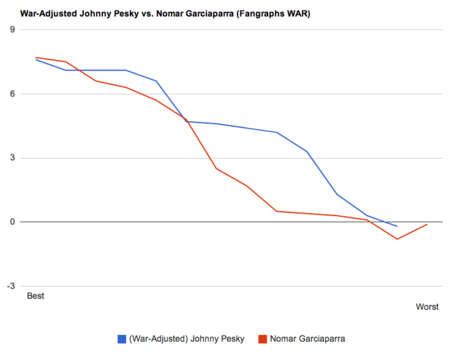 Nomar's peak is similar, but he drops off very quickly. In this alternate universe, Pesky clearly has the better Hall of Fame case. His WAR edge is 58.1 to 43.2 with a longer peak.

But Nomar's not a Hall of Famer. Let's look at a perfect contemparary for Pesky—an East Coast shorstop who played at the same time (and also lost three years to the War). Here's War-adjusted Johnny Pesky vs. War-adjusted Phil Rizzuto: 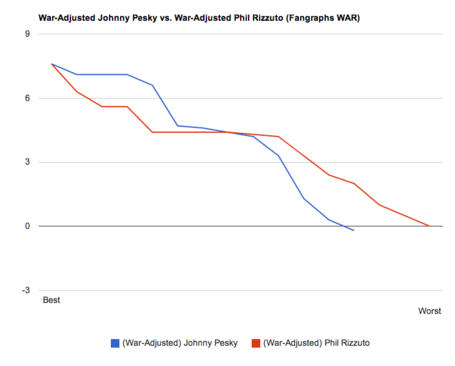 Rizzuto (who was worth 47.2 fWAR before the adjustment) beats Pesky 60.3 to 58.1—quite similar. Pesky's peak is a bit longer while Rizzuto's career lasted longer. They are actually great comps for each other. Of course, Rizzuto is the Hall of Fame while Pesky is not. Rizzuto is often cited as being a less-than-deserving Hall of Famer. While his career numbers are lacking a bit, I think the key seasons he missed becuase of the War make him a better candidate than many believe. But do I think his case is considerably better then Pesky's? No, I don't.

Rizzuto peaked on the BBWAA ballot with 38.4% of the vote in 1976, his last year of eligibility. He was elected by the Veterans Committee in 1994. Pesky, meanwhile, earned one vote on the 1960 BBWAA ballot. It was the only ballot he would appear on. Rick Ferrell and Addie Joss also received one vote apiece on that ballot. Both have since been inducted.

Am I lobbying for Johnny Pesky for the Hall of Fame? No, I'm not. But you're going to read a lot about what an incredible man and ambassador he was. All of it is well-deserved. I just want to remind you that he was also one hell of a ballplayer.