When the Milwaukee Brewers signed Aramis Ramirez to a three-year $36 million contract with a mutual option for the fourth year, I was very skeptical. Ramirez was supposed to help Rickie Weeks, Ryan Braun and the rest of the Brewers' offense fill the void left by Prince Fielder's move to Detroit. Signing a 34-year-old to a multi-year contract is hardly ever a good idea, and given Ramirez's performances in recent seasons, I was almost positive that Milwaukee would end up on the losing end of this contract.

That season felt like the last hurrah of Ramirez's great career, though.

Ramirez averaged just 103 games with multiple stints on the disabled list over the course of 2009-10. He was the epitome of replacement-level in 2010, and it seemed as though that inevitable end-of-career decline had hit Aramis. Those two seasons, in my opinion, were a better reflection of what the Brewers were going to get out of Ramirez than his 2011 campaign.

There are still two seasons, at least, left on Ramirez's deal with the Brewers, but at this point it looks like I may have been wrong about the contract.

A graph of Ramirez's wRC+ over his career makes his 2010 season look even more like an anomaly than anything else: (click to embiggen) 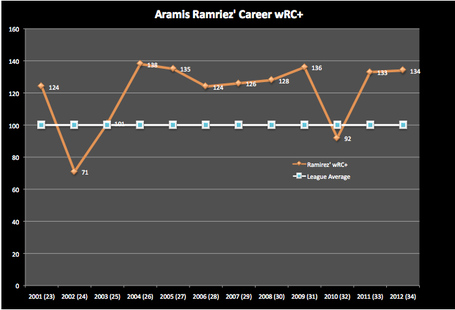 Ramirez hasn't been the best hitting third baseman in the NL (like he was in 2011) this season. The great seasons that Chase Headley and David Wright have been enjoying eclipse the work that Aramis has done, but he has still been very good.

Sadly, his exploits have gone unnoticed, because the Brewers have had a very tough season.

Coming into Sunday, the Brewers' record was 51-61, good for fourth place in the NL Central. Their offense hasn't been the problem though.

The loss of Fielder was supposed to be a massive one for the Brewers' offense, but their team wRC+ has only dipped three points from last season; 105 to 102 (still above league average). Weeks hasn't been himself, although he has been better of late. Braun, Ramirez, Jonathan Lucroy, Corey Hart and more have kept their offense near the top of the NL (currently 2nd).

The reasons behind their struggles have lied solely in pitching and defense.

Their team ERA is up over .60 points from last season. Mike Fiers and Yovani Gallardo have been good. Also, Zack Greinke was stellar before being traded. But Shaun Marcum has been hurt, and the rest of their pitching staff has been awful -- especially their bullpen, which has the second worst bullpen ERA in baseball.

As we know, team defense is a significant component of ERA. And Milwaukee's defense this season has been rough, to say the least.

It's obviously tough to be a good baseball team without good pitching and defense, even with a very strong offense. Ramirez has never been a great defender, but this year his defense has been (roughly) around league average according to the four of the most common measures of defense (UZR, DRS, TZR, and FRAA). Milwaukee didn't sign Aramis to be a Gold Glove defender though; he was brought in for his bat.

Ramriez's bat has been everything that Milwaukee could've asked for in 2012, so it'd be wrong fault him for their lack of success.

At the time of the deal, I did not like the contract that the Brewers gave Ramirez. But through less than one season of the three-year deal, it appears that the front office made the right move by bringing the third baseman in.

If Aramis can stay healthy and continue be a 120 wRC+ hitter over the next two seasons, than the Brewers will have clearly won on this contract.. And quite honestly, that may not be that large of an "if."