Can We Quantify Hitting the Ball Hard?

Share All sharing options for: Can We Quantify Hitting the Ball Hard?

I've recently been thinking a lot about BABiP, as usual, and some players inherent skill to consistently outperform the major league average in that category. While a lot has been said regarding why some players with specific skill sets tend to consistently have higher BABiPs than other, like fast players, there still is a lot of unknown regarding players like Joey Votto who just seem to be hitting the ball harder than anyone else. Which is exactly what I want to focus on, players' abilities to hit the ball hard. The only problem is, being able to hit a ball hard is a quality and in order to gauge players' abilities we need to be able to quantify them The issue with that being, we cannot perceive qualities instead seeing their manifestations in certain contexts which then enable us to quantify different abilities to a certain extent.

I was randomly looking through some players statistics over at FanGraphs and happened to ask myself a certain question. The question was, how come some flyball hitters are prone to hitting popups, but other are not. I immediately thought the reason had to do with a player's inherent skill in making hard contact because, as we all know, popups are pretty much infield flyballs. I surmised that since certain players seem to be skilled at not hitting popups and, yet they still manage to hit lots of flyballs, they must be hitting the ball harder than their counterparts who do manage to hit a decent amount of popups. In other words, not only do players who don't hit popups not hit popups, but they also hit their flyballs harder. The skill isn't avoiding hitting popups, the skill is hitting the ball hard. So I went on to analyze the data to see if my theory holds water.

I started by devising a simple metric called flyball to popup ratio or FB/PU. It simply is a player's flyball rate divided by his popup rate. The metric is extremely simple and perfectly defines what I am trying to analyze. Using data from 2009-2012, the first thing I looked at was FB/PU's correlation with HR/FB%, being that if FB/PU actually quantifies a player's abilty to hit the ball hard, it would surely correlate with HR/FB%. 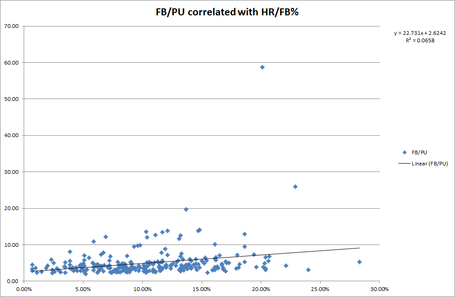 Here we see that FB/PU does in fact correlate with HR/FB% to the tune of .26 R, showing though, while existent, the correlation isn't all that strong. The problem here is that flyball rate itself has a much stronger correlation to HR/FB% than its derivative FB/PU, mitigating our findings. 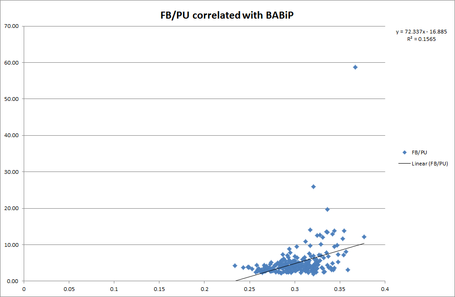 Now onto FB/PU's correlation with BABiP. In theory, we said, because the player who tends to hit less popups hits the ball harder, you should see that reflect in his BABiP. Certainly, players who hit the ball harder, should have higher BABiPs. Here we see a much stronger correlation with R equaling .4, but again, the issue at hand is that each factor on its own correlates strongly to BABiP, diminishing our ability to make a conclusion. The lower your popup and flyball rates, the higher your BABiP will be. This makes perfect intuitive sense being as flyballs and popups are easier to field than line drives and groundballs. 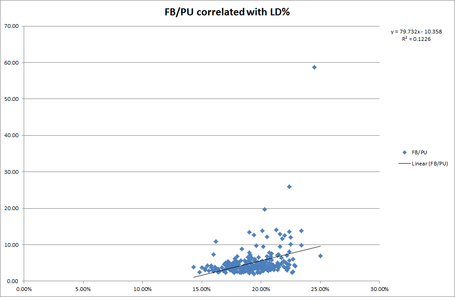 In order to avoid the same issue we've had with HR/FB% and BABiP, I decided to take a look at FB/PU correlation with line drive rate. The reasoning behind this being because we know a player has to hit the ball hard in order to produce a line drive, so if line drive rate correlates strongly with FB/PU, suffice to say FB/PU is also indicative of how hard a player hits the ball. We see the two do correlate, with R at .35, proving the theory to be correct to a certain extent. 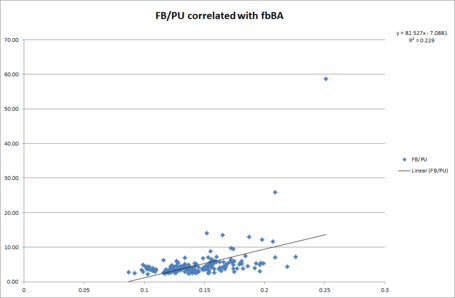 Finally, and most importantly, we see that FB/PU correlates even stronger to batting average on flyballs (fbBA), with an R of .48. This pretty much shows that there clearly are some players who hit flyballs harder than others and therefore have more homeruns and a higher batting average. This makes a lot of sense, the players who hit the ball harder tend to be more successful. All I've done is try to quantify that ability, so the next time you're looking at a player's PU%, make sure to realize what the ramifications of having a high or low popup rate are. It's not just that a certain player is more susceptible to hitting popups, it's that he makes weaker contact in general.

I wanted to finish off the post by including a top 10 of the hitters with the highest FB/PU since 2009, but since we're focused on flyball hitters, everyone with a flyball rate of under 30% was excluded.

No surprise to see Joey Votto and Ryan Howard top the list, two very powerful fellows. More surprisingly are the likes of Derrek Lee and Brad Hawpe who, while having power, aren't known for being prodigious power hitters or consistently hitting the ball hard. The likes of Jack Cust, Chris Davis and Matt Kemp are all known for being able to hit a baseball very far, meaning they make hard contact often. The three most interesting names, in my mind, are Alex Avila, Austin Jackson and Shin-Soo Choo. Like Lee and Hawpe, none of these players are considered sluggers so at first glance their inclusion in the top 10 might not make much sense. What really intrigues me is that they're all young, they all have raw power and have had higher than average BABiPs in the past. Could it be that with an increase in flyball rate, their power numbers would take a large leap forward? It's very possible.