Share All sharing options for: The BtBWAA's 2012 NL All-Star Vote

Last week, we convened the Beyond the Boxscore Writers Association of Awesomeness (henceforth referred to as the BtBWAA) for the task of selecting All-Star teams based on who actually deserved to make it, not on player popularity or whatever the fans use.

Twelve BtBWAA members took the time to fill out ballots for each league. Votes were cast between June 28 and July 2. All ballots will remain anonymous, but in the interest of debate I am hoping that our participants will voluntarily offer explanations for their picks. (Hint, hint.)

We've already laid out our picks for the American League squad, so without further ado here are your our 2012 NL All-Stars, along with breakdowns of the vote at each position. 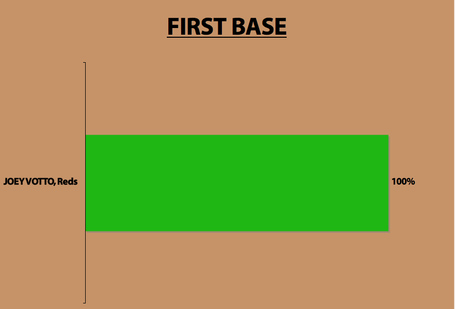 Off to a good start so far, as all 12 of us and the fans agreed that Joey Votto is the best first baseman in the Senior Circuit. Interesting that the first category is unanimous after we didn't have any in the AL, though I suppose it would have been more surprising if an intelligent analyst had chosen someone else. 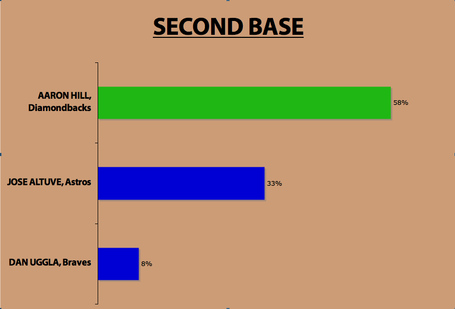 At second we picked Aaron Hill, a man who isn't even on the NL roster for some reason. Fan pick Dan Uggla gets one voter's support, but he's a distant third behind Hill and Jose Altuve. 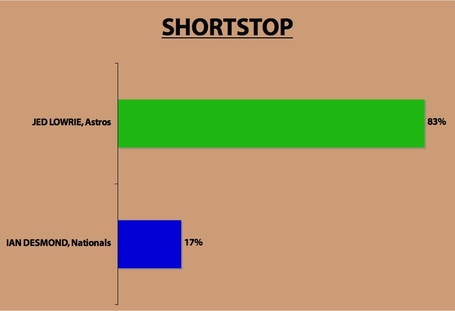 Jed Lowrie runs away with the voting at shortstop, meaning both halves of our ideal keystone will be sitting at home next week (Ian Desmond earned a bench spot on the real-life squad). Fan vote winner Rafael Furcal is conspicuously absent. 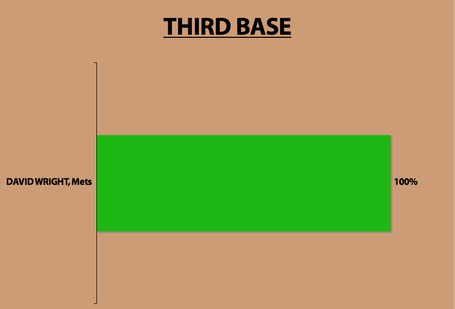 Once again everyone agrees...except the fans. Is there a rational argument for choosing Pablo Sandoval over David Wright? 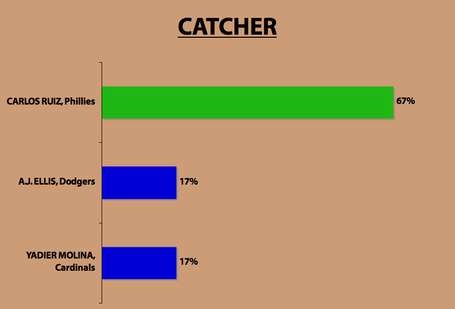 The fans sure screwed this one up. Buster Posey set a new NL votes record but doesn't get a single one from us. Carlos Ruiz and Yadier Molina made the team anyway, but not poor A.J. Ellis. 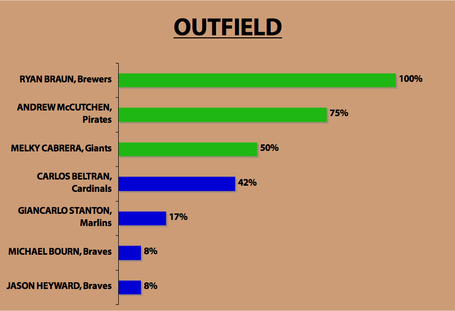 I thought this was the hardest NL position to choose. Ryan Braun is our third unanimous pick and Andrew McCutchen has a pretty clear mandate as well. The race between Melky Cabrera and Carlos Beltran (both of whom won spots from the fans) for the third outfield spot was the closest in our voting for either league. And no one voted for the other popularly elected outfielder, Matt Kemp.

Here's how our NL lineup compares to the fans'. Overall I'd say they didn't do a very good job. 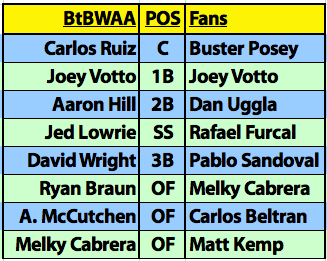 I'll cop to my ballot: Joey Votto, Aaron Hill, Jed Lowrie, David Wright, Carlos Ruiz, Ryan Braun, Michael Bourn, and Andrew McCutchen. I'd love to hear others' explanations for their votes. So how'd we do?