Should the Number of Hall of Fame Inductees Increase as the League Size Increases?

Share All sharing options for: Should the Number of Hall of Fame Inductees Increase as the League Size Increases?

A couple weeks ago, I wrote about the Hall of Fame percentage over time. That is, I showed what percentage of playing time was claimed by Hall of Famers throughout history. 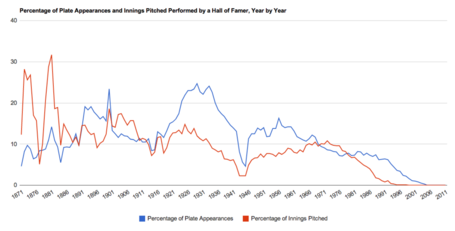 The key findings on this chart were:

I was thinking about this some more and I want to play devil's advocate—with myself. Maybe we shouldn't be looking at this on a percentage basis. Maybe there should only be a certain (raw) number of Hall of Famers at any given time—regardless of how many teams and players there are in big league baseball. So, rather than saying the top x percent should be Hall of Famers, maybe it's just the top x players.

Here's how the raw numbers look over time: 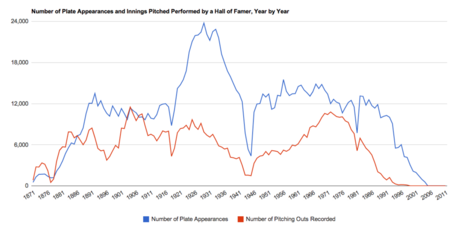 This is very interesting. Three things jump out at me right away:

What do you think? Should we be enshrining a top percentage of players (making it variable depending on the size of the league) or the top few across all of history, regardless of the size of the player pool?

I've added this new chart as an interactive Google Chart to the original visual.