Could Ichiro Have Passed Pete Rose?

Share All sharing options for: Could Ichiro Have Passed Pete Rose?

About a month ago, Dave Schoenfield raised the question of whether or not Ichiro Suzuki would be considered the "Hit King" if he ended up with more combined professional (Japan and US) hits than Pete Rose. Ichiro is already baseball's single season hit champion, but should he also be considered the all-time "Hit King", as well?

Ichiro debuted in the majors in 2001 and took American baseball by storm, becoming only the second player in baseball history to win both the ROY and MVP. That season, Ichiro was the catalyst for one of baseball's best all-time teams. HIs debut came as a 27 year-old after he had already racked up some record-breaking numbers, in Japan.

Schoenfield did not go into much detail about Ichiro's hit numbers, instead he leaned towards raising the question, rather than finding a conclusion. However, Schoenfield brought up two very good points that would help someone (myself) who would like to delve further into the actual numbers.

The main problem with taking Ichiro's 1278 career hits in Japan at face value, is the difference in talent level, as well as hitting environment between Japanese and American big league baseball. The two points Schoenfield made do a good job of combatting this problem. He discusses how it may not be fair to discount his numbers in Japan, at all:

Schoenfield's final statement is very bold, but not necessarily wrong. So, I first took his reasoning at face value and considered how many career hits Ichiro would have had under the assumption that he started in the US at age-20 and put up the same numbers (batting average) as he did in Japan, while playing 162-game seasons. After eliminating Ichiro's brief age-18 and 19 seasons from the sample, his age-20 to 26 hit total in Japan, translates to 1548 hits, given the MLB's 162-game season.

I then combined that number with his 2517 career MLB hits, to get a grand total of 4065 hits, just 192 hits away from breaking Rose's record (4256 hits). ZIPS projects 89 hits for Ichiro the rest of this season; thus he would only need about 100 more hits to become the hit king. Ichiro will become a free agent after this season, but it's unlikely that he will retire. Although he was around or below-replacement level last season, his defense has been phenomenal this season and could be reason enough for a team to sign him, not to mention the number of fans Ichiro's name could bring to a new ballclub, for a season. One more season would be all that Ichiro would need to break Rose's record, in this unrealistic "what if?" scenario.

Sadly, this analysis is not so simple. Schoenfield backs his point that you could instantly translate Ichiro's Japan numbers to exact MLB equivalents, by referring to his 2001 dominance. Ichiro had no issue transitioning to Major League pitching, but does that mean he would have been as amazing in the US, starting with his age-20 season, as he was in Japan? I'm not so sure of that fact.

Deciding how much to discount Ichiro's Japanese numbers is the most difficult aspect of this analysis. The easiest way to discount his numbers would be to simply compare them to hitters like him who have had to make the same transition from Japan. The problem with that "simple comparison" is that there has never been a Japanese import that is easily comparable to Ichiro's skill-set and talent level.

So I decided to check into similarity scores and comps to Ichiro, in an attempt to project his pre age-27 hit totals, based on the hit totals of players similar to him, at the major league level.

I listed top-5 most similar players (and their hit totals) to Ichiro, according to Bill James' Similarity Scores:

Comps and Similarity Scores do not work here, at all. The problem with them is that they are based solely on Ichiro's numbers in America, which obviously have not been his entire career. They also tend to lean towards players who had late MLB debuts, like Ichiro. A better analysis would include comparable players who were as great as Ichiro has been from age-27 on, but also logged a ton of major league games before that age.

The only players in the World Series era to have more hits than Ichiro after their age-26 season are Pete Rose, Sam Rice, Ty Cobb, and Stan Musial. Thus, my better sample of comparable players includes players with 2,000 hits or more from age-27 that played their first full-season (500+ PA) at age-20 or 21:

*Hits were added,based on their pre-war seasons, to the totals of Musial (197 hits added) and Mays (228 hits added), who both lost pre age-27 to serving their country, when calculating the average below:

The average pre age-27 hit total for this sample of eleven hitters is 1113 hits. Considering that these hitters are all among baseball's greatest ever, I think the total of 1548 hits that I came up with earlier, based on a direct translation of his Japanese numbers to a 162 game season, was a bit of an overestimate. Ty Cobb was the only hitter to have a higher hit total than that 1548 number. Granted, I think Cobb is a fairly solid comp for Ichiro, the number still feels too high. 1113 hits is much closer to Ichiro's 1278 total in Japan, than it is to the 1548 total I calculated. 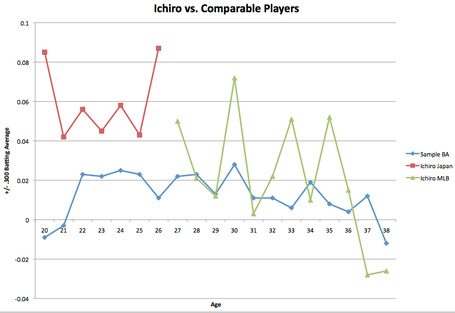 Ichiro's MLB numbers were definitely better than the sample. His batting average was nine points higher, per season, than the sample average during his time in the majors. However, this comparison shows that Ichiro's numbers in Japan should be discounted a fair amount. His Japanese batting averages were 46 points above the sample per season; which is significantly higher than his advantage based on numbers put up in the United States. Thus, I discounted his Japan numbers to be only nine points (instead of the 46 points I used originally) above the sample to calculate a projected hit total for Ichiro, given that he started his career at age-20 in the United States. This new discounted hit total is 1387 hits.

I have no idea if Pete Rose ever gambled on baseball. Quite honestly, I do not understand the evidence against him, and gambling has nothing to do with whether or not Rose is/or even should be baseball's "hit king". However, for some odd reason I would rather have Ichiro as baseball’s all-time hits leader, or at least I think that by the end of his career he should have that title. Maybe I feel that way for selfish reasons, because I was too young to ever see Rose play, but can still remember how excited I got, as a kid, to see Ichiro lead off an All-star game for the American League. Ichiro is the best leadoff hitter I've seen play, and the best hitter I have ever seen, at least in terms of hits (my apologies to Barry Bonds), and I think that it's unfortunate that the incredible numbers he put up in Japan, during his youth, will never be considered in MLB's record books.

Ichiro's hit total and 2012 batting average as of Saturday, June 30th. All data comes from Baseball-Reference, Fangraphs, and Japanese Players.com