There's a Hall of Famer in Every Lineup

Share All sharing options for: There's a Hall of Famer in Every Lineup 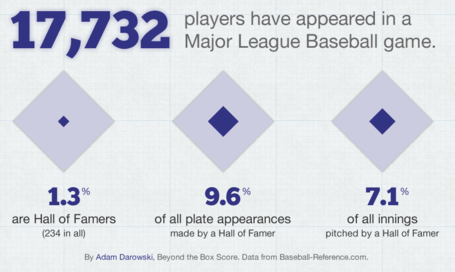 I think I've read about a million times before that 1% of all Major League players end up in the Hall of Fame. Guess what—it's true.

But not all players are equal. Some only make a few plate appearances. Some make over 10,000. So, while Hall of Famers account for 1% of players, they actually account for about 10% of playing time.

I graphed the percentage of plate appearances and innings pitched performed by a Hall of Famer over time. If life was fair, you might expect the lines to be fairly constant. Of course, Hall of Fame voting has never traditionally been "fair". Here's how it really looked: 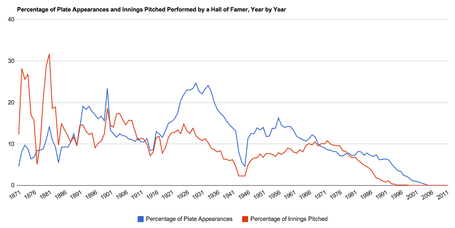 Click through for a Google Chart with little tooltips and whatnot.

Ah, so much to say about this graph. Here we go:

It's pretty obvious that recent seasons would be lower. In many cases, these players are not eligible yet. And the ones who are are still being hotly debated (think Jack Morris and Jeff Bagwell).

Roger Clemens will be on the next Hall of Fame ballot. His career began in 1984. He has the earliest debut of any player who is not yet eligible, so I took a look at the numbers through 1983. In that case, 12.7% of plate appearances and 10.0% of innings pitched were performed by Hall of Famers.

The most recent Red Sox game (as I'm writing this) was a 5-3 Rays win on Saturday. In that game, there were 68 plate appearances and 17 innings pitched. If this was an average game, we saw eight plate appearances made and 1⅔ innings thrown by a Hall of Famer. On average, you're seeing a Hall of Famer at least once each time through a typical lineup. When you don't face a Hall of Famer in a lineup, that's because some other lineup has two of them.

1872 to 1883 (oddly, with the exception of 1877) is all out of whack. Over those twelve years, 20.8% of all innings were thrown by a Hall of Famer. Two things are at work here. First, only 13.8% of the innings were thrown by pitchers in the Hall of Fame as a player. So, many early pitchers are in for other reasons, like a pioneer or executive (think Candy Cummings and Albert Goodwill Spalding). Secondly, in that era clubs typically relied on one or two pitchers to throw all of their innings. Because of this, there were far fewer pitchers and the ones who lasted tended to compile obscene career numbers that got them in the Hall of Fame. The weakest Hall of Fame pitcher from this era is probably Mickey Welch. He’s still a perfectly acceptable Hall of Famer.

Frankie Frisch is often accused of diluting the Hall of Fame by lobbying for the induction of several of his cronies (while he was on the Veterans Committee). This, of course, is 100% true. Frisch played from 1919 to 1937. Coincidentally, from 1920 to 1939 over 15% of plate appearances were made by Hall of Famers every single season. That’s the minimum. From 1924 to 1935, the minimum was 20%. The peak was 1929 when 24.7% of plate appearances were made by a Hall of Famer. Let me say that again—one out of every four players to come to the plate all season for every team was a Hall of Famer.

The Hall of wWAR identifies many players from this era who do not belong in the Hall of Fame. The list includes:

Jackson, Bottomley, Wilson, Lindstrom, and Hafey just happened to be teammates of Frisch.

Most of these selections are terrible. Some you can understand given the information available at the time. Manush, for example, hit .330. Lazzeri and Combs got big boosts from being on famous Yankee teams. Hack Wilson had the 56-homer, 191-RBI season in 1930. Chuck Klein took advantage of his home field to produce some gaudy power numbers.

Right. And we keep diluting the Hall of Fame? Hardly. It has never been so hard to get in.

Anything else jump out at you from the graph? I have ideas for future posts based on this data. Very interesting stuff.