What The Rays Know About Relievers

Share All sharing options for: What The Rays Know About Relievers

For the second straight season we've seen the Rays sign a below average reliever and somehow turn him into a shutdown closer. Prior to the 2011 season, the Rays signed the veteran Kyle Farnsworth and he proceeded to have the best big league season of his career. Following this excellent performance, the Rays went out and signed yet another veteran reliever who has put together a superb season closing for the Rays. Kyle Farnsworth's injury facilitated Fernando Rodney's ascent into the closer role for the Rays this season.

I'm going to examine a few changes in these pitchers' approaches in order to determine what might have led to these major improvements.

As you can see, Farnsworth altered his pitch selection from 2010 and threw a lot more sinkers in 2011 while cutting down on the amount of four seam fastballs he threw.

Fernando Rodney has proceeded in doing the same thing as his predecessor, eschewing his four seam fastball in favor of his two seamer.

While it's interesting that both Farnsworth and Rodney have increased their usage of the two seamer, it would be ludicrous to assume this to be the sole cause for their drastic improvements. More likely, because of the Rays excellent fielders, these pitchers were told to pitch to more contact and keep the ball in the park, the two seamer tends to have both of these characteristics.

More intriguing is that upon their arrivals, Farnsworth and Rodney changed their placement on the pitching rubber. Farnsworth moved from the left side of the rubber to the middle and Rodney moved from the right side to the left side. I was not the first person to notice this, Robbie Knopf of CloserReport wrote an excellent article chronicling Farnsworth's move to the middle of the rubber, as does RJ Anderson of Baseball Prospectus about Fernando Rodney's move across the rubber. Here are links to Farnsworth's 2010 and 2011 delivery, as well as Rodney's 2011 and 2012 pitching delivery.

Since joining the Rays, each of these pitchers have also started taking longer strides towards home plate. Shorter strides are less than optimal mechanically speaking and utilizing proper mechanics is important for a few reasons: it takes stress off your shoulder and elbow and therefore reduces risk of injury, it allows a pitcher to maximize his velocity and it makes it easier for a pitcher to repeat his delivery and command his pitches. 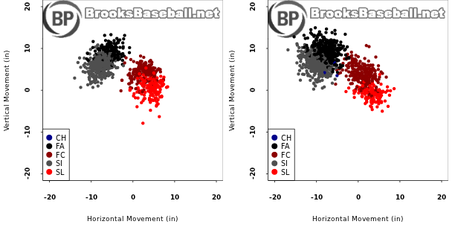 In 2011, Kyle Farsnworth had shown a significant improvement in locating his pitches as shown by his 1.87 BB/9 rate, as opposed to his career rate of 3.75. The chart shows that each of his four pitches were more closely bunched together and less spread out. On average, each pitch deviated less from its mean than in 2010, this looks to me like the ultimate proof of a pitcher consistently commanding his pitches. In 2011 each of Farnsworth's pitches had similar spin deflection which therefore made it much easier to spot within the strike zone. 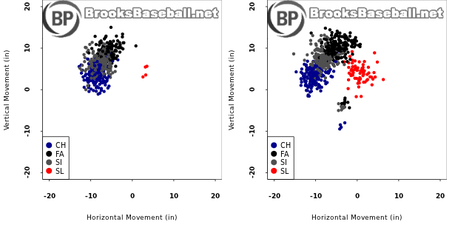 The same is definitely true for Rodney, who has followed suit in lowering his walk rate this season. His BB/9 is 1.34 this season, while his career rate is 4.62! Rodney's pitches also have much smaller individual clusters this season as compared to last.

Obviously, this is an extremely small sample size, but based on Farnsworth's and Rodney's newfound ability to throw strikes, it seems as if making a few mechanical adjustments, like taking a longer stride, can help turn an average pitcher into a very good one. Though, not only have Farnsworth and Rodney learned how to throw strikes and limit their walks, they've also become more complete pitchers.

Farnsworth used to have a nice sized platoon split, in other words, left handed hitters had their way with him. In 2011, Farnsworth made the appropriate adjustments and learned how to pitch to batters of the left handed variety.

Rodney had the opposite issue. Because of his tantalizing changeup, Rodney has had a reverse platoon split up until the 2012 season. In 2012, Rodney has just been dominating everyone.

In conclusion, each pitcher has made three adjustments to their pitching style. The most basic adjustment was made to their pitch selection. Both Farnsworth and Rodney, since joining the Rays, have used their two seamers more often. The rationale behind these moves seems pretty straightforward being that, as was mentioned before, the Rays are arguably the best fielding team in baseball and the two seam fastball, as opposed to the four seamer, is more conducive to contact and less likely to leave the yard. They also made a few mechanical adjustment. Along with ironing out a few issues, each pitcher extended his stride another step. I believe this to be the main cause for each pitchers' ability to continually throw strikes and post the lowest walk rates of their careers.

The most interesting adjustment Rodney and Farnsworth have made has been their change of position on the pitcher's rubber. Farnsworth moved from the left side of the rubber to the center and Rodney moved from the right all the way to the left side. I believe this to be the reason both Farnsworth and Rodney have eliminated their platoon splits and have been successful against all batters since joining the Rays. Ben Sheets was notorious for changing his placement on the rubber according to which handed batter he faced. Sheets would move to the left side of the rubber when facing right handed hitters and vice versa. Sheets' reasoning behind his constant shifting was that it enabled him to throw his fastball inside versus both left and right handed batters. This little trick enabled Sheets to be successful against all hitters. Sheets, over the course of his career, threw either his fastball or curveball about 90% of the time. Pitchers with the same type of pitch distribution as Sheets usually have trouble facing opposite handed hitters, due to the fact that they don't have very effective changeups.

Unlike Farnsworth, Rodney has shifted from the right side of the rubber to the left. This has caused his already deceptive changeup to improve. Previously, the pitch would come out of Rodney's hand and same handed batters would see the pitch start behind them and they'd know it would not come back over the plate. Now, a right handed batter sees the ball coming out of Rodney's hand and sees the pitch moving across the entire plate and then falling out of the strike zone. Just like Farnsworth, the Rays have optimized Rodney's mound positioning according to his repertoire and have turned him into a shutdown reliever.

If the Rays baseball operations staff has truly figured out how to optimize a pitcher's effectiveness by changing his position on the pitcher's rubber, that is truly amazing.