A Graphic Look at Trout vs Harper

Share All sharing options for: A Graphic Look at Trout vs Harper 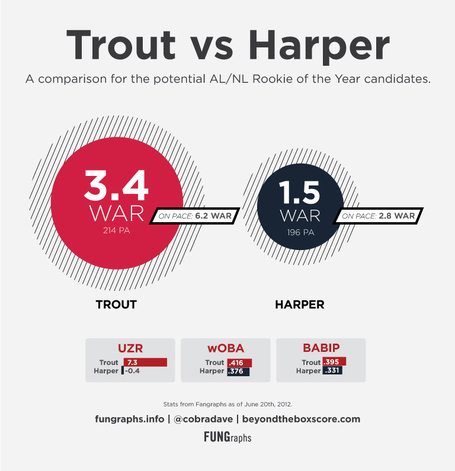 Arguably the top two prospects up this year, and potential AL/NL rookie of the year candidates, both of these players have provided some extra excitement to their respective fanbases. Bryce Harper obviously has been hyped up as the next great ball player, batting away clown questions and sporting extra eye black from time-to-time, but how good has Trout been so far? In simple terms, just dealing with WAR, Trout has been outstanding, and comparable to Adam Jones in terms of production. The leaders above him are quite impressive too: Votto, Braun, Wright, Bourn, Hamilton.

Outside of just looking at WAR, is Mike Trout better than Bryce Harper?

Catching a few Nationals games on MLB TV, I've been lead to believe that Harper has a plus plus arm, and while I've seen this on a few select plays, his UZR of -0.4 tells me something different, especially compared to Trout's 7.3 UZR.