A Graphic Look at Adam Jones Production vs Actual Cost

Share All sharing options for: A Graphic Look at Adam Jones Production vs Actual Cost 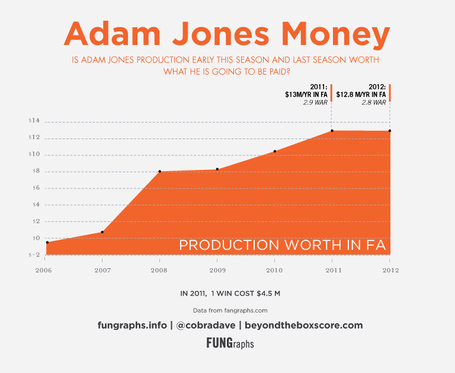 I've been struggling with the title of this, but long story short, is Adam Jones contract, $85.5 over 6 years, a good value for the O's? Grant Brisbee last week in an post about Angel Pagan mentioned the dangers of signings and extentions this early into the season:

Now is not the time. If you pay now, you're including a hot-month premium -- that's going to cost a couple million, at least -- and that's never a good idea.

Did the O's overpay, or was it wise to lock up Adam Jones before even going into the final year of arbitration?

Averaging $14.25M per season, slightly more than what his current and previous season production would cost in FA (according the the Fangraphs Dollars valuation). But as his peak career WAR last season was 2.9, if he can produce roughly 3.16 WAR per season, he be playing his worth.

Seemingly first to jump on this last Friday, Dave Cameron thinks this is a good deal:

For the Orioles, getting Jones at this price is a slam dunk. Given what he’s already accomplished in the first several months of the season, Jones was going to get a significant raise in arbitration from the $6 million he’s making this year, likely putting him in line for a $10 or $11 million salary in 2013. Given that the Orioles clearly weren’t going to non-tender Jones under any scenario, we can essentially assume that part of the deal was already predetermined to a large extent, so the Orioles are essentially adding five years and $75 million or so onto their existing commitment.

Compared to other CF, he's the second highest right behind Matt Kemp:

Assuming the O's knew that Granderson and Hamilton (not to mention Michael Bourn, B.J. Upton, Shane Victorino, and Angel Pagan) were either getting extensions or going in FA, they probably didn't want to have those signings dictate the price, but wanted to set the value of Adam Jones on their own, (even though he has one arbitration year left). I was thinking it was a little early to do this, but after reading Cameron's piece, I'm compelled to say this was a great idea for a young team looking to pledge their commitment to winning.