Wins Above Replacement: Distribution and Rarity of Talent 2011

Share All sharing options for: Wins Above Replacement: Distribution and Rarity of Talent 2011 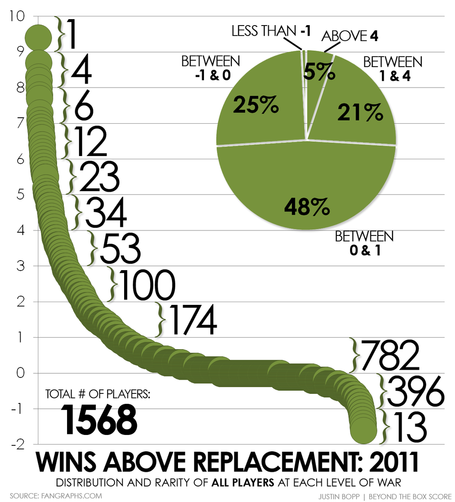 Breakdown after the jump.

Way, way back in November of 2010, I posted a little saber-graphic that was created in an effort to find the commonality of one-win-above-replacement players. To find a coherent answer, the question had to be broadened to find the general distribution of players across the spectrum of WAR, since the number of players at any single integer is actually quite small (in 2010, there were exactly twelve one-WAR players).

The result of the study showed that the majority of all players (73%) fell between negative one and positive one wins above replacement, while players earning more than one WAR were surprisingly rare.

Revisiting that study with data from 2011 (courtesy of our friends at Fangraphs) shows the same. This time, I've included positional-only and pitcher-only graphics (both below) and a total distribution graphic (featured above), whereas last time the study only included positional players.

All players (more than zero IP and zero PA) are included. 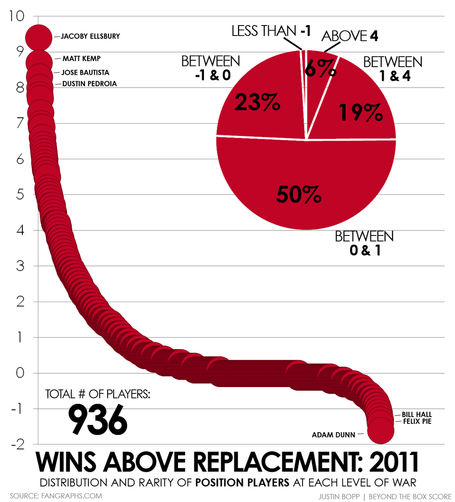 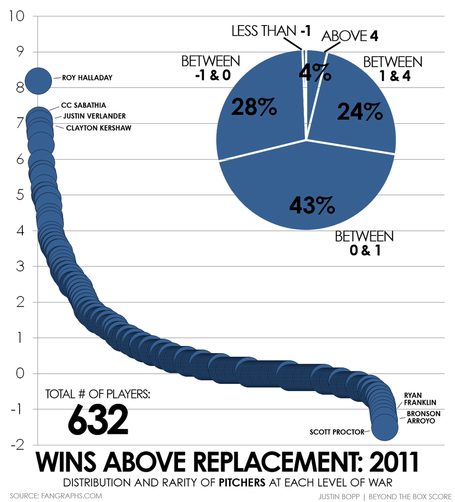 Ideas for future study (outside of the parameters of this) could be to compare WAR distribution to salary distribution with the goal of constructing a WAR-optimized roster at the lowest cost, which is itself somewhat futile since most high-WAR/low-salary guys will be at or before arbitration. But still, it's probably worth noting that the majority of value is between 1 and 4. Until next time.