Who Gets the Scoop? Major League Reporters, Ranked. 2011-12 Edition

Share All sharing options for: Who Gets the Scoop? Major League Reporters, Ranked. 2011-12 Edition 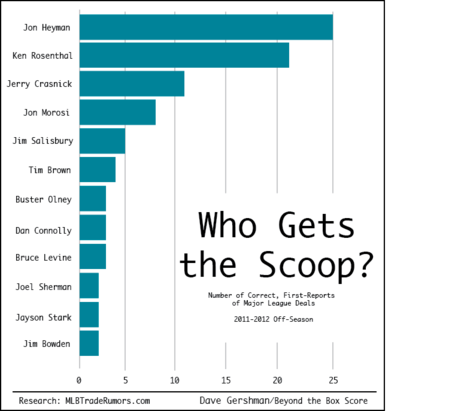 Another off-season, another set of scoops standings ranking baseball's best reporters based on their success reporting major league deals. In using MLB Trade Rumors' fantastic resources to figure out who scooped what, and who scooped who, I've yet again put together a stat board but, instead of it being for players, it's for those who work around the players. Baseball's team and national reporters put in countless time day after day attempting to break news and report deals to their readers but, aside for simply being credited for breaking a particular story, they rarely get ongoing recognition for their work. Although this formula and thought process is far from perfect, it does just that.

Let me unveil a few thoughts on why I feel these stats aren't ridiculously crazy.

Sure, all this formula does is prove that one reporter was first to tweet about a signing that occurred during the off-season, when in fact another reporter could have lacked phone service, was occupied doing something else or just didn't have a connection who could provide such info. Scoops standings to me are just a fun way of compiling information that would be otherwise considered unusual, simply because no one searches deep into the archives of MLBTradeRumors.com to find out whether the Jason Kubel signing news (for instance) was broken by Ken Rosenthal or Jon Heyman.

Indeed, it's not as if they are predictive stats such as the ones we glance at on FanGraphs.com every now and then. They are just tallies, and absolutely nothing more.

However, I have spent lots of time doing research and attempting to find ways to in fact make this information useful and worthwhile. Because many have brought up the fact that accuracy might be more important than quantity of deals broken -- because, sure, reporters often leak news that ends up not being true or simply just not gaining steam -- I thought it would be nice to put that into consideration and determine the importance of accuracy.

The reason, at least for me, why breaking deals is so special is because it means that the sources who leak such info are either very well connected or that a certain reporter has plenty of sources. Either way, developing and cultivating sources can be very difficult and, if anything, takes a long time to gain that level of friendship to the point where a baseball exec or agent is constantly texting you, letting you know of a deal that's potentially taking place. Also, it's hard to make a big deal about accuracy when beat writers cover a team that's very active in their acquisition making, whereas a reporter of a team standing pat wouldn't have that opportunity.

Additionally, reporters are always given information from credible sources, such as general managers even, who could eventually make an opposing or changed decision which, although isn't the reporter's fault, does seem somewhat odd to readers and fans considering he or she initially reported much different news. But my intent is to not put as much thought into these standings as some have in the past. Whether it's WAR, FIP, wins and losses or whatever the statistic is, there will always be people questioning different formulas and theories. This set of rankings just so happens to be my theory on a different and unusual way to look at baseball data.