A Graphic Look at Josh Reddick vs this Offseason's FA

Share All sharing options for: A Graphic Look at Josh Reddick vs this Offseason's FA 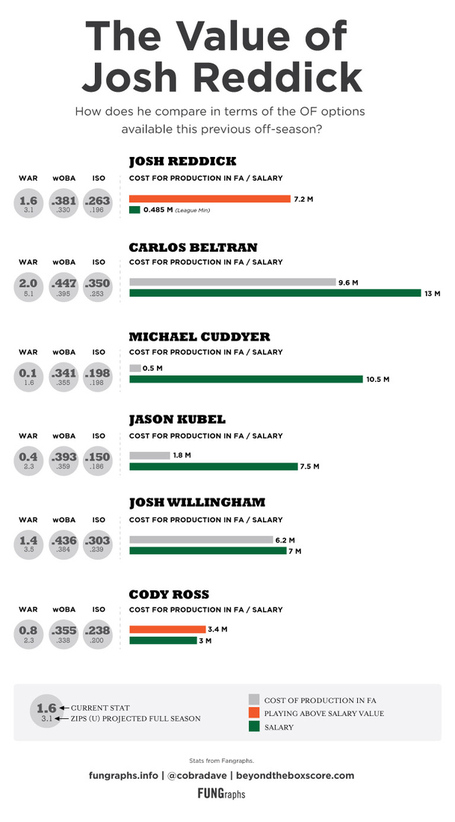 The A's have been carried offensively in the early part of the season by contributions from various new acquisitions; first Yoenis Cespedes (before the DL stint), some sparks from Jonny Gomes, Brandon Inge (also before his DL stint), and now, Josh Reddick. In the month of May, he's been producing: 0.439 wOBA and 6 HR. Currently, if you look at the Fangraphs May leaderboards, he's comparable to Andre Ethier (0.434 wOBA) and Matt Holliday (0.451 wOBA). Not too shabby of company to be in.

As the A's go into their 40th game, and close to the quarter mark of the season. how does Josh Reddick compare to other OF options the A's could have possibly gone after this offseason?

At the league minimum, he's been an incredible bargain; a steal. Carlos Beltran and Michael Cuddyer weren't in the range in terms of salary, but I had thought Josh Willingham was not only a decent gamble, but fan favorite. Using Fangraphs Dollars metric, Reddick's production is currently worth $7.2 M in FA.

On this list, Michael Cuddyer is obviously playing far below his value, but can Josh Reddick with a full season of PA's continue to produce near top-10 OF numbers (currently 11th in wOBA)?