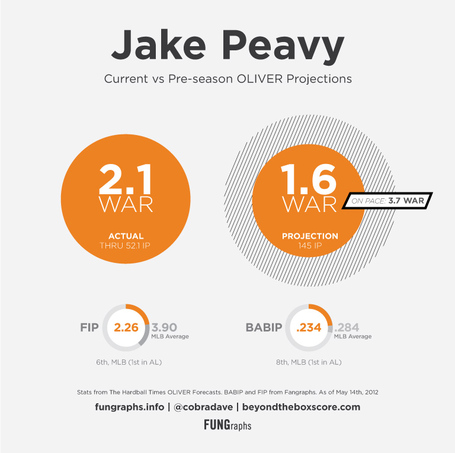 It certainly has been surprising that Jake Peavy has seemed to have found his 2007-self, the one who pitched 223.1 and a career best 2.24 FIP (not to mention, this was his Cy Young-winning season). Last Thursday, David Schoenfield proclaimed Peavy as the best pitcher in baseball, and while only 7 starts into the season he's laying claim to the title of the best pitcher in the AL. Always hard to judge this early into the season, is this just a hot start, or is he set to drop off sometime soon?

Peavy has offically won the Pitcher of the Month award for the AL, so others are recognizing his accomplishments so far. With a FIP of 2.24, he's leading the AL and above names like Jered Weaver (2.25) and another unlikely one, Jason Hammel (2.54). His BABIP isn't of 0.236 is reminiscent of Jeremy Hellickson's last season of 0.223. Although these BABIP numbers do usually fluctuate from year-to-year, over the past 3 seasons, Jered Weaver is a notable AL pitcher that seems to have somewhat consistent numbers:

Something to note from ESPN Stats and Info, this is Jake Peavy 2.0:

To make up for a decline in velocity, Peavy has exercised control. Among American League starting pitchers, Peavy's strikeout-to-walk ratio of 6.29 is tops. Peavy's never finished a season with a strikeout-walk ratio higher than 4.32 (2005).

Now the OLIVER-projected 3.7 WAR for the full season seems to be showing a drop off at some point during the season, but even that puts him closer to his mid-2000's form and is a happy improvement for a pitcher that has been battling injuries the past 4 seasons. Best of luck the rest of the season. At the least, I've picked him up in a fantasy league of mine for the time being.