Yu Darvish's Filthy "Shuuto" from Tuesday - What is this pitch?

Share All sharing options for: Yu Darvish's Filthy "Shuuto" from Tuesday - What is this pitch?

Baseball Prospectus' Jason Parks wrote a short piece on Wednesday about a pitch thrown by Yu Darvish on Tuesday April 24. Parks, for those of you who are don't know (and you should know him), is one of BPro's scouts of minor league talent and does good work alongside Kevin Goldstein.

Parks and "several other scouts he knows", were befuddled by one pitch in particular on the night Yu struck out ten Yankees:

I hadn’t noticed that he was throwing what I’ve seen described as a shuuto, or a reverse slider.

I’m not certain of the classification—Gameday and Brooks Baseball classified the pitch as a two-seam fastball.

I was confused until the seventh inning, when catcher Mike Napoli appeared to be using a different sign for the pitch than the standard fastball, placing an L between his legs when he wanted the pitch with the extreme arm-side run. The announcers referred to the offering as a two-seamer, but as I stated, the movement was way more extreme, as was evident by the catcher’s pre-pitch setup and anticipation of the pitch (he expected run). The best example can be seen in the sixth and final pitch of Darvish’s seventh-inning matchup against Raul Ibanez, as the standard fastball morphs into a reverse slider that runs away from the hitter like the hitter has cooties. The image below shows the trajectory from Gameday, but you can also view the pitch at the 44-second mark here.

I’m not overly familiar with PITCHf/x, which is to say I’m aware of its existence and I respect those that have a mastery of such data, but I’m not fluent in its language. That said, I’d love to see a breakdown of Darvish’s pitch movements to see if my eye was just playing tricks on me or if he was manipulating this particular ball for effect, as was suggested by the sign from the catcher and the outcome of the offering.

Well, let's oblige Mr. Parks' request and see what this pitch is and how it moves, and whether it is indeed some new Japanese pitch or not.

This is not the first time we've heard of the Shuuto in the Major Leagues. In fact, the name's been thrown out a bunch for pitches for Japanese pitchers, but hasn't really been strictly defined. So Mike Fast looked at the Shuuto a few years ago:

Here's my theory on the shuuto: it's Japanese for "inshoot", and it can describe any pitch that tails to the pitcher's arm side, including the two-seam fastball, the circle change-up, the screwball, and the split-finger fastball.

I came to this conclusion after noticing that Hisanori Takahashi's circle change-up was described as a shuuto. All the research I did on the web uncovered many apparently different pitches as shuutos. Greg Maddux's two-seam fastball was described as the American pitch most like a shuuto. The thing about that is...Maddux's two-seamer is pretty much like many other American two-seam fastballs.

I was even pointed at this post on Jonathan Hale's Mockingbird blog about how to throw the shuuto. The description there looks very much like a two-seam fastball. In the comments, then high school, now college pitcher Jamichael Oxley described his screwball-like pitch as a shuuto. Eventually, I decided that the only thing all these different pitches had in common was that factor encapsulated in the name: inshoot.

In fact, Russell Martin, the former (with the Dodgers) and now current (with the Yankees) catcher of Hiroki Kuroda, made a statement which seems to confirm Fast's quote:

And what of the so-called shuuto, the dancing fastball with a reputation that precedes Kuroda?

"It’s just a two-seamer, a good two-seamer that does have a nice little snap to it," Martin said. "It does sound cool, though, doesn’t it? Shuuuuto."

In fact, Parks' own description pretty much describes a two-seam fastball, at least an extreme one, in that it rides strongly in on same-handed batters and tends to have more sink than the average four-seam fastball.

The Pitch Thrown by Darvish:

Yu Darvish throws a LOT of Pitches. I've classified EIGHT different mostly distinct pitches by Darvish in his four starts (4-seamer, 2-seamer, cutter, change-up, splitter, slider, curveball, slow curve), and you could argue that he has even more (Harry Pavlidis joked that you could argue Darvish has FIVE different breaking balls alone). You can see his pitches on April 24 in the graphs below:

Wow that's a lot of pitches! Anyhow, I'll direct your attention to the group of pitches marked in ORANGE - for two-seam fastballs/sinkers - which you can find on the left side of each graph. On average, this pitch is really good for Darvish: it averages just lower than 93 MPH and can touch 95+, has roughly 7.5 inches of tail in on righties and away from lefties, and only 6 inches of "rise" on average. "6 inches of rise" by the way essentially means the pitch has solid sink for a fastball that fast, especially when you consider that his normal four-seam fastball averages 9.5 inches of "rise" - in other words, a batter expecting the four-seamer and getting the two-seamer will find the pitch 3.5 inches lower than he expected it to be, resulting in many many ground balls.

It's among these two-seamers that we see the pitch referred to as a "Shuuto" by Jason Parks. I've helpfully circled the pitch on the graph above and marked it with an arrow. This pitch is an EXTREME two-seamer from Darvish, with only 2.5 inches of "rise" and 8.5 inches of tail - in other words this is a pitch with STRONG sinking movement (it sinks 3.5 inches more than the standard Darvish two-seamer) and strong tailing action......and it was thrown at 94.2 MPH.

Figure 2 below illustrates the path of this "Shuuto" and the path of a four-seam fastball thrown in the same at-bat: 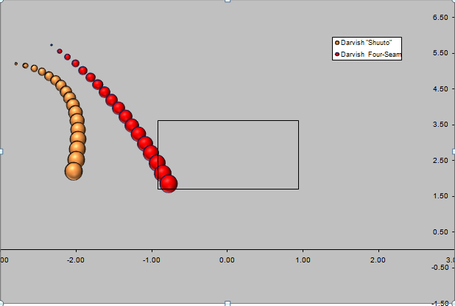 Figure 2: A Graph showing the path of two Darvish Pitches to Raul Ibanez on 4/24.

The red pitch track on figure 2 above is a four-seam fastball thrown to Raul Ibanez that was taken for a called strike (The Square Box is the strike zone). As you can see, the pitch appears pretty straight and crosses the plate just on the outside and low corner of the strike zone to Raul Ibanez.

The orange pitch track is the "Shuuto". The pitch is aimed initially just a bit more outside than the four-seamer....but instead of going straight, it bends away from Raul Ibanez (a Lefty) and dives. The end result is that the pitch is a whole FOOT away from the strike zone when Ibanez flails pointlessly with the bat for Strike 3.

So is this a distinct unique Pitch?

Okay so now that we've identified the pitch in question, the real question is: Is this a real new pitch thrown by Darvish that he can use to get out batters? The answer.is probably...... no.

This particular "shuuto" appears most likely to be the product of such variation - it's a typical Darvish two-seamer which has, due to variation, especially nasty movement. But it fits well within the cluster of Darvish's normal two-seam fastballs and the location of the pitch (a whole FOOT outside) makes me believe that it probably wasn't expected even by Darvish himself to have some extra bite.

Note that if you ask Darvish himself if he throws a shuuto, he'll probably say yes...but he'll be referring to all of his two-seamers, not just that pitch in general.

All in all, Darvish's pitch to Ibanez was a great pitch, but it wasn't some magical weapon he can break out at any time for the strikeout. You'll see it again this season, but don't expect to see it very often.