Wins Above Average: Taking the "Replacement" out of WAR

Share All sharing options for: Wins Above Average: Taking the "Replacement" out of WAR 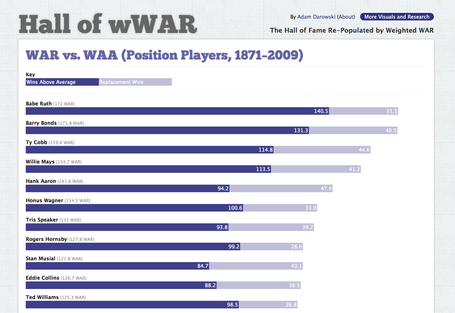 Wins Above Replacement (WAR) is a great tool for finding the overall value a player provided… over a replacement player. But, when talking about the Hall of Fame (as I often like to do), should we really be comparing candidates to replacement players? It makes sense to do so when discussing active major league players and roster construction. However, when looking back on a player’s career and comparing him to the all time greats, perhaps we should hold him to a higher standard.

One of the complaints about using WAR as a Hall of Fame measuring stick is that it rewards "compilers", or players who lasted a long time without necessarily providing a great deal of value. That’s because a player who hangs around for twenty years at a league average level is actually a very valuable commodity when building a team—but he is not a Hall of Famer. In the Hall of wWAR, I’ve tried to account for this by double-counting WAR above 3.0 (for Wins Above Excellence) and triple-counting WAR above 6.0 (for Wins Above MVP). But what would happen if we just threw everything away that lies between those "replacement" and "average" lines?

I've seen a couple other attempts at something similar to Wins Above Average, but those typically just looked at WAR above 2.0 (which is generally considered "average"). The problem with that is that not all 2.0 WAR seasons are average.

Glanville made up the other 1.8 wins from his playing time. He made a league leading 678 plate appearances. Brown, on the other hand, made 104 plate appearances. He was worth +14 at the plate, a total of -1 for baserunning, reaching on errors, and avoiding double plays, +1 in the field, and -1 for position. That's a total of 13 runs above average. Run that through 1968's conversion and you get 1.6 wins above average. His playing time made up just 0.4 of his 2.0 WAR.

Now, Gates Brown is not someone to include in Hall of Fame discussions, so let's start looking at this in terms of career wins above average. In 1972, Charlie Keller received 6.1% of the Hall of Fame vote—his highest total. While that's not overwhelming support, it is a lot if you simply consider Keller a 1085-hit, 189-home run Yankee outfielder. Keller, you'll see, was a very unique player.

Let's compare him to a player who provided similar career value—Omar Vizquel. Vizquel has been worth 42.3 WAR (but he will show as 43.2 in my charts because he has actually been sub-replacement since 2009). While both have similar WAR, the way they went about it was very different. Vizquel did his work in 11,277 plate appearances (we're going to stick to Omar's numbers through 2009) while Keller did it in 4604.

Now, showing up is actually a valuable skill that shouldn't simply be dismissed. After all, we shouldn't put Charlie Keller in the Hall of Fame just because his Wins Above Average is better than players like Willie McCovey (30.8), Harmon Killebrew (30.4), Ernie Banks (28.7), and—get this—Pete Rose (28.2).

That's right—Pete Rose's Wins Above Average is just 28.2. His career WAR is 75.3. While Rose collected a lot of hits, he's not quite the player some make him out to be. He's certainly not the best player outside of the Hall of Fame. His last great season came at age 35. His last useful season came at age 40. Yet, he played until he was 45.

After age 35 (his final ten seasons), he played in 1378 games and collected the final 1494 hits of his career. In those 5889 plate appearances, he was worth just 6.6 WAR. That's a lot of time spent hanging around. It looks even worse when you compare him to the league average, rather than replacement level.

Now, by hanging around that long, Rose did something pretty amazing. Not only did he pass 3000 hits, he passed 4000 and broke Ty Cobb's all time record. And while Rose played below average for those ten years, he was still above replacement level (which has some value).

(Of course, in Rose's final five seasons, he wasn't doing much of anything outside of breaking Cobb's record. He was worth a combined -2.4 WAR over that time. Oof. What was his manager thinking?)

So, while WAR isn't an all-encompassing stat, WAA isn't either. It is, however, one that I look forward to seeing how I can use.