Share All sharing options for: Performances in April Mean Little When Forecasting Success

Everyone wants to see their team get off to a good start, but how much stock can you really put into records in April?
Fans often contend a team's success hinges on how it performs during the first month of the season.

Though logical, this assertion often is inaccurate. 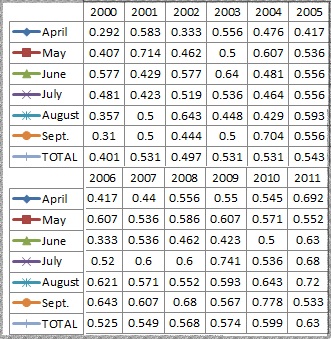 Using the information above, the regression analysis resulted in the following coefficients (all statistically significant):
The higher the number, the more closely that month is linked to the end-of-season winning percentage.
To further examine the importance (or lack thereof) April has in forecasting success, I looked at every club dating to 2000 that won the World Series. I made note of their April winning percentage and subtracted April's won-loss record to find overall season winning percentage minus April. I did the same with the Phillies and charted the following (* means March games added in April, October games added in September):
PHILLIES APRIL WIN % vs. END OF SEASON 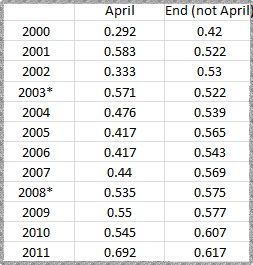 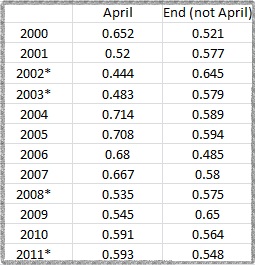 Sure, winning early is a great opportunity to build a lead in a division, but the season is a marathon, not a sprint.
Sustained success in the middle months of the season is much more meaningful than a solid winning percentage in April.