Hitting Homers In Bunches: A Look At Rates Of Multi-HR Games

Share All sharing options for: Hitting Homers In Bunches: A Look At Rates Of Multi-HR Games

Note: After I finished the graphic in this post, Matt Kemp went off on the Padres. He has 2 HRs in 2 innings as I'm writing this. I've added that game to the text, but the graphic is just through Friday's games.

A week ago, Corey Hart smacked two homers in a game against the Cardinals. That Hart would be one of the first players to have a multi-homer game isn't as unexpected as it might seem on the surface. In fact, that was his 12th career multi-homer game. Given that Hart has 128 career home runs, that means nearly 20% of his career homers have come in just 12 games.

What is surprising is that Kemp has just 4 multi-homer games in his career (counting last night's game). That's as many as than Hart had in 2010! About 6% of Kemp's career dingers have come in multi-homer games.

With a bit more research, I found another good matchup of extremes, with Carlos Quentin (121 HRs, 14 multi-HR games) and Josh Hamilton (120 HRs, just 4 multi-HR games). In their careers, both Quentin and Hamilton have homered in about 5% of their PAs, but 24% of Quentin's homers have come in multi-HR games, compared to less than 7% for Hamilton.

Here's a visualization of these comparisons: 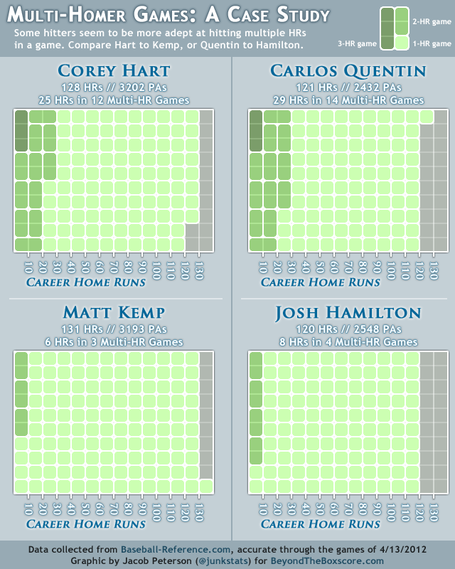 Since 2006, the first year that any of these players got significant MLB playing time, there have been 1659 multi-homer games in MLB, accounting for 3369 homers in all. The league average, then, is for about 11% of homers to be hit in multi-homer games. So Hart and Quentin are way above average, and Kemp and Hamilton are way below it.

I've been trying to think of a reason why this might be the case (something beyond random variance, that is). My first idea was to look at park factors, since Kemp has spent his career in a park that slightly depresses right-handed power. But while that may have contributed to Kemp only having two home multi-HR games, it wouldn't have affected his road numbers, where he also has two (one of them at Coors Field). And besides, Kemp actually hits homers at a higher rate at home (4.9% of his PAs) than on the road (3.4%).

Similarly, while Hart's and Quentin's home parks have likely helped them to amass multi-HR games, they clearly don't explain all of the difference here. Six of Hart's 13 multi-HR games have come on the road, as have 6 of Quentin's 14.

And then there's Hamilton, who has played his entire MLB career in hitters parks, and has had all 4 of his multi-HR games at home. Why on earth hasn't he had a multi-homer game on the road yet? I know the AL West has some good pitchers' parks (and some great pitchers), but that's just weird.

Overall, Hamilton's home / road splits are large but not drastic enough to explain that kind of discrepancy. He still has hit homers in 3.7% of his PAs on the road in his career, compared to 4.6% for Quentin on the road. (Hart has just a 3.2% road HR rate.)

Is there something else about these hitters that makes them so extreme? Are Quentin and Hart just more apt to "hot" and "cold" spells, and Kemp and Hamilton more consistent? Or is this all just a big fluke? I'd be interested to hear your theories.