The Most Unpredictable Teams in Baseball

Share All sharing options for: The Most Unpredictable Teams in Baseball

This time of year, you can't turn your head without seeing projections for the 2012 MLB season. There are countless projection systems and simulated models out there, each with a different idea of how the standings will look come October. It's wonderful.

It's always fun to see how well the different systems correlate—if everyone agrees that my Indians will win 120 games, I'll feel fairly confident that I won't be tearing my hair out this summer, But while most projections try to look for a consensus, I think it's much more interesting to explore those areas in which people disagree.

Last week, I used the data from a preseason power rankings vote to estimate each team's relative unpredictability, and it provided what seemed like logical results. But ordinal data (as in, the 1-30 ratings in power rankings) does not lend itself to statistical analysis as well as ratio data. So what happens if we assess teams' unpredictability by examining their projected win totals?

I started by pooling the projected standings from CAIRO, PECOTA, Marcel, Coolstandings, TeamRankings, the Predictalator, and Clay Davenport (all from before the first non-Japan game). Here's where that takes us: (playoff teams in bold, wild cards in italics) 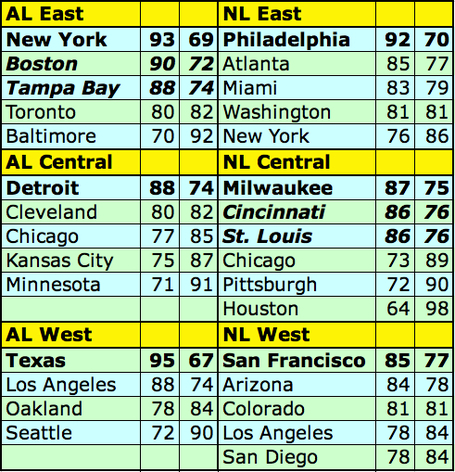 You could quibble with some of these results—I have a hard time seeing both of the NL wild cards coming from the Central, and I strongly disagree with the thought that Cleveland doesn't look better than last year—but on the whole this looks like a fair baseline for the 2012 season.

With that in mind, here are the 30 MLB teams ranked by the standard deviations of their win projections, with the ranges of their projections thrown in too:

By this measure the Marlins are the most unpredictable team in baseball this year, and it isn't particularly close—the difference between Miami and the No. 2 Rangers is equal to that between the No. 9 Indians and the No. 24 Athletics. Looking over the projections, it's no surprise to see the Marlins on top:

Moving down the list, the Rangers' high rank is based more on the projector's willingness to assume greatness than differing opinions of how good they are; every system has them at least tied for first in the AL West, but some projectors (TeamRankings, Marcel) are more conservative than others (Davenport, Coolstandings). The same goes for the Tigers and Phillies. On the flip side, the Astros universally project as the worst team in the NL, but it's not clear just how bad they'll be.

The Royals are also quite interesting. General consensus is that they'll be a mid-70-win team, but Coolstandings puts them in second place in the AL Central (eight games ahead of Chicago and nine ahead of Cleveland), while Davenport has Kansas City as the second-worst team in baseball. The discrepancies are not as dramatic, but the Mariners and Twins are in a similar boat.

Looking at the projections, it's the Rockies and Indians who really elicit the most diversity of opinion: the Predictalator and Coolstandings have Colorado finishing in the basement of the NL West, while Marcel and Davenport put the Rockies in first place. Cleveland's win spread is similar, with Coolstandings putting the Tribe behind both the Royals and White Sox and Marcel putting the Indians just one game behind Detroit.

I find the bottom of the list a little surprising. The Red Sox are a real high-upside team with some serious flaws, which seemed to me like a recipe for uncertainty. The Orioles don't have the same uncertainty as the other very good or very bad teams do—I'm not quite sure why that is. And the Blue Jays rank far lower here than they did in my original study, perhaps because, as the consensus fourth-best team in the division, the clear strengths and weaknesses of their opponents limit the variability of their record.

There's no way to predict the big story of the year, but unpredictability itself seems like as good a place as any to start. Looks like it could be a fun season to watch in Miami.