Number of Innings-Eaters and Team Success

Share All sharing options for: Number of Innings-Eaters and Team Success

Recently, a fellow Braves blogger (Scott Coleman of SB Nation Atlanta) noticed that there was a good chance that the 2012 Braves would not have a starting pitcher reach 200 innings pitched (thanks to a bevy of youngsters and Tim Hudson being behind schedule due to injury). Despite this, the Braves remain a very viable playoff contender, but I was curious about the historical precedents involving teams with no inning-eaters.

I decided to examine how team performance has related to the number of 200-inning pitchers that team had. I looked at the years from 1996 to 2011 (the non-strike-shortened years in the One-Wild-Card-Per-League Era). The results are presented in the infographic below. 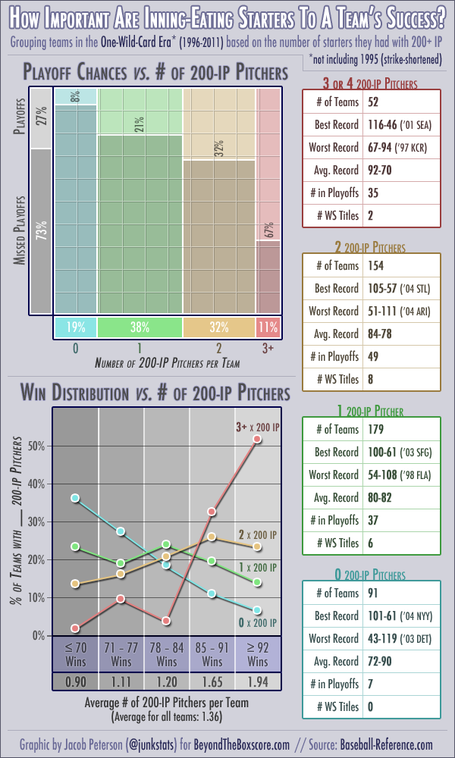 In short, having more inning-eating starters seems to increase a team's chances of winning more games and reaching the post-season. This is especially true at the extremes: teams that didn't have a 200-IP horse almost never made the postseason (just 8% of the time), but teams that had 3 or more such pitchers made the playoffs more than two-thirds of the time (67%).

What does this mean for the Braves of 2012? Only about 18% of teams who lacked an inning-eater won 85 or more games. Those are hardly unbeatable odds, however, especially considering the Braves' depth of pitching talent and the added cushion of the 2nd Wild Card. And of course there's a strong possibility that one of Tommy Hanson, Jair Jurrjens, Brandon Beachy, or Mike Minor manages to surpass the 200 IP threshold, making it a moot question.

I'm guessing that this is an effect of the drastically different style of postseason baseball. With more off days and much more at stake in a given game, the quality of a pitcher's innings matters far more than the quantity of those innings. Another possible factor is fatigue, which would perhaps disproportionately affect pitchers who had thrown more innings in the regular season.

And of course, there's always our old pal random variance; we're only dealing with 16 World Series in this sample, so we can't be too sure of anything. I certainly wouldn't say there is evidence that having more inning-eaters hurts a team in the postseason. What I would say is that there is not any evidence that having more such pitchers helps a team once it has already qualified for the playoffs.

Finally, I'd like to point out the divergent results of two teams from the 2004 season. That year, the Cardinals and Diamondbacks each had 2 inning-eating starters (Jason Marquis and Matt Morris for St. Louis, Randy Johnson and Brandon Webb for Arizona). The Cardinals, though, won 105 games, while the D'backs won just 51.

How did that happen? Well, the D'backs' other 2 starters over 100 innings--Steve Sparks and Casey Fossum--were abysmal, with ERAs above 6. The Cardinals had 3 other starters with at least 180 innings, all of whom were at least league-average, including Chris Carpenter, who was well above-average. And to top it off, St. Louis scored 240 more runs than Arizona.

The Cardinals' 5 pitchers over 180 innings makes me wonder how the results of this study would change if the IP threshold was lowered to 180 or even to include all qualified pitchers (1 IP per team game). I'm guessing that we'd see similar results, but I can't say for sure.