The Unequal Boost of Playoff Expansion

Share All sharing options for: The Unequal Boost of Playoff Expansion

News broke this week that Major League Baseball will add two additional wild card teams for the 2012 season. It's the first of two changes that will significantly reshape the balance of the game—the other being the Houston Astros' planned move to the American League in 2013.

Too often our opinions and analyses of proposals like these are reactionary. We hear the idea of adding more playoff teams and we wonder who might win the new consolation spots next year, not how it will effect teams' chances of reaching the postseason for years down the line (though, to be fair, this particular arrangement will last for only one season.)

When I was analyzing the effect the new rules will have on my beloved Cleveland Indians, I stumbled into the territory of the theoretical: what would the Tribe's odds of reaching the postseason would in both the old and the new scenarios in a vacuum that ignored differences between teams? It's the only fair way to assess the long-term consequences of reformatting the playoffs.

Evaluating a change like this in the long run requires assuming that player quality, organizational management, and financial competitiveness will all even out in the end and thinking of the league as comprised of generic, interchangeable franchises. The derivation of a team's chances of playing into October (O) under such a scenario looks a lot more complicated than it is:

Since 1998, the American League has had 14 teams and the National League has had 16, with divisions varying from four teams (the AL West) to six (the NL Central). It's not often that we stop to think about just how much inequality that creates in the in-a-vacuum playoff odds, but it makes a real difference. Here's how the deck is stacked for teams under the one wild card system we are apparently about to abandon based on what division they're in:

As an Indians fan, I suppose it's not in my best interest to complain about the inequality of opportunity here. Still, that it takes a year longer for the average NL Central team to earn a playoff berth that it does for an AL West club doesn't seem quite right. It makes sense under the circumstances, though: the Rangers and Angels have two fewer opponents for both the division title and the wild card than the Cardinals and Cubs do.

How do the odds look with the extra wild card teams?

Aside from the general inflation that gives everyone a better chance at the postseason, the extra wild cards create a good news-bad news situation from an equality of opportunity standpoint. There's less intra-league variation under the new system, because the extra wild card gives a bigger boost to teams that are less likely to win their divisions—just like how BABIP is of greater importance to a contact pitcher like Josh Tomlin than it is for, say. Carlos Marmol. However, AL teams get a bigger bump than NL teams do, because they have less competition: there are only 11 non-division winners in the AL each year, compared to 13 in the Senior Circuit.

The most likely beneficiaries of the new wild card spots, then, are teams in the AL East and AL Central who will be contenders but probably won't win their divisions. Given that this scenario will be in place for this season alone, this might as well have been gift-wrapped for my Indians, though the Blue Jays fit the criteria well too. That's not to say that Cleveland or Toronto should be considered a favorite to win the second wild card, just that their chances of making the postseason probably got the biggest boosts from the new arrangement.

Come 2013, there will be a new equilibrium—one that is much more fair. The Astros' move from the NL Central to the AL West will balance all six divisions at five teams each and even out the leagues at 15. Simple division says that every team will have a 1 in 3 in-a-vacuum chance to make the playoffs each year.

Here's a look at how the competitive balance will change for each division under each system: 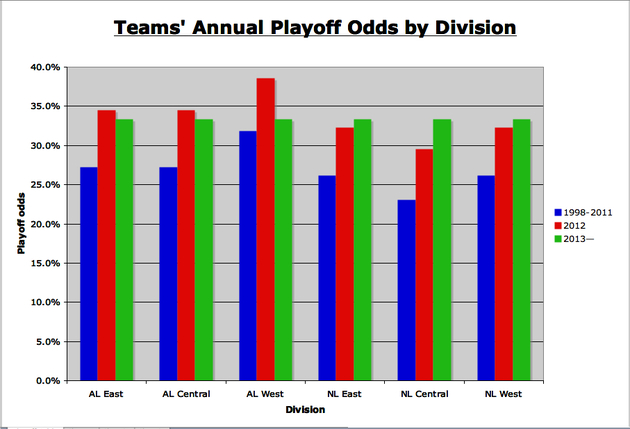 The additions of the extra wild card teams are a mixed bag in terms of evening the playing field: they alleviate (to some extent) AL West teams' advantages and NL Central teams' hardships, but AL teams who already have a leg up benefit more. Luckily (for the game, not for me) the competitive balance will be evened out in 2013—at least, in theory.