The Players Who Have Hit 7th Most Often Since 1919

Share All sharing options for: The Players Who Have Hit 7th Most Often Since 1919

The past 2 weeks, I've looked at which players have started the most games in the 5th and 6th spots in the batting order. This week, the 7th spot gets its turn.

The graphic below features the players with the 10 most career starts in the 7th spot (in the boxscore era, which is since 1919) as well as the 10 players who started the highest percentage of games in that spot (minimum 400 starts hitting 7th). Most of the players listed are relatively unknown old-timers, but if you read the post on 6th-spot hitters, you should remember the #1 guy: 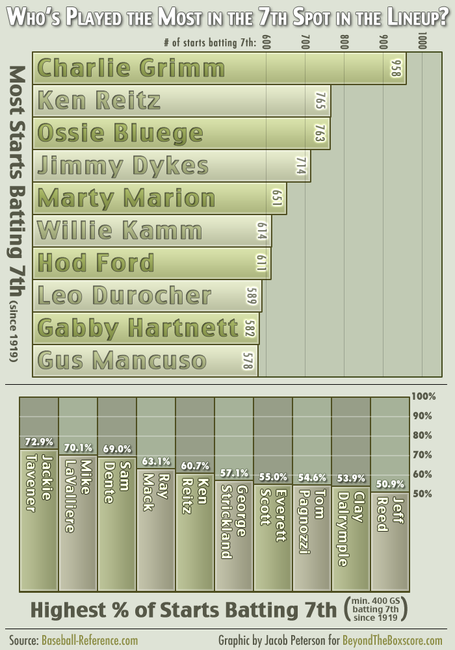 That's right: Charlie Grimm, who has the most starts batting 6th since 1919, also has the most starts batting 7th. And in this case, it wasn't remotely close, as Grimm topped the runner-up total of Ken Reitz by nearly 200 starts. Despite having more starts hitting 7th than 6th, Grimm ranked only 15th on a percentage basis in the 7th spot (compared to his 8th ranking for the 6th spot).

Mike LaValliere comes in 2nd on the percentage list; what's interesting about that is that his counterpart on the early '90s Pirates, Don Slaught, just missed the top 10. Slaught ranks 12th with 49.8% of his starts in the 7th spot. Spanky and Sluggo: reunited at last!

Overall, the totals for the top 10 are lower for the 7th-place hitters than for the 5th or 6th hitters, at least at the top of the list. The table below shows the number of players to start at least 400, 600, and 800 games at each of the 3 batting order spots:

As you can see, the 7th spot ranks last among the 3 spots (and by inference, last among the top 8 spots) in terms of number of players to hit there for more than a few full seasons. It is interesting, however, that there are slightly more 7th hitters than 6th hitters who have started 400+ games at that spot. Perhaps it's fair to say that the hitters most associated with the 6th spot hang around a bit longer than 7th-spot hitters, but that there is a greater depth at the 7th spot.

On a percentage basis, however, the players who do hit 7th at least 400 times in their careers hit there a relatively large fraction of the time:

In this case, the 6th spot is clearly the least defined of all the batting order positions, and the 7th spot is basically equivalent to the 5th spot.

A total of 17 players had at least 400 starts in both the 6th and 7th spots. Grimm (obviously) had the highest combined total, with 1849 starts between the two spots. He also had the highest combined percentage, with 89.1% of his 2075 career starts occurring when he hit 6th or 7th. Travis Jackson ranked 2nd in both combined total and combined percentage, with 1337 of his 1592 career starts (84.0%) being in the 6th or 7th spots.

Get this: Larry Parrish also had 404 starts hitting 4th, which means he had between 402 and 406 starts in each of the lineup spots between 4th and 7th. That's some seriously equal opportunity. I don't know how that happened, but it's pretty damn cool.

Players of recent vintage don't have much of a consistent presence in the 7th spot. The active player with the most career starts in the 7th spot is Jason Varitek, with 453 (T-38th overall). Unless you count Pedro Feliz as active, that is; Feliz has 461, but he hasn't played since 2010. Varitek is the only player from the 2011 season above 400, and he might not play again. If he retires, the active leader will be Alex Gonzalez, with 393. Adrian Beltre (375) is close behind.

Based on evidence from this post and the one on the 6th spot, it seems that recent managers are becoming less likely to lock hitters into roles throughout their lineups. Sure, most of them still have a fairly stable 1st 4 spots, and maybe even a regular 8 or 9 hitter, but the 6th and 7th spots are hard to pin down. This implies that managers are learning to have greater flexibility, which I'd imagine is a good thing on the whole.

What does everyone else think?