Extreme Ages Among Hall Of Famers

Share All sharing options for: Extreme Ages Among Hall Of Famers

When Ron Santo died in late 2010 and then was elected to the Hall of Fame a year later, many people (justifiably) bemoaned the fact that Santo was not able to enjoy his triumph. With his enshrinement ceremony due in July, he will have missed the chance to participate in the festivities by less than 2 years (1 year and 233 days, to be precise).

Santo, however, is not the closest call. Thirteen other Hall of Famers died nearer to their enshrinement ceremonies than Santo. Several have actually died between the announcement and the ceremony; at least these players got to hear the good news, even if they didn't make it to Cooperstown.

These are all presented in one infographic. Click on the preview below to view the larger, full-size graphic. 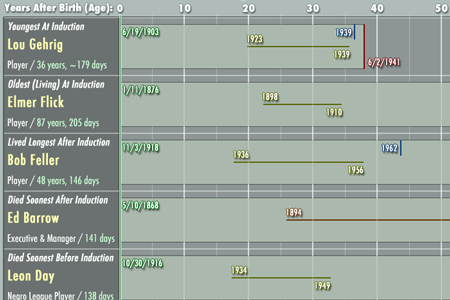 As you can see from the preview, the player who actually died the soonest before his induction was Leon Day, the star Negro Leaguer. Day was already hospitalized with diabetes and heart troubles when he heard the news that he had finally been voted in. He died just 5 days later.