Share All sharing options for: The Distribution of Position Player WAR by Team, 2002-2011 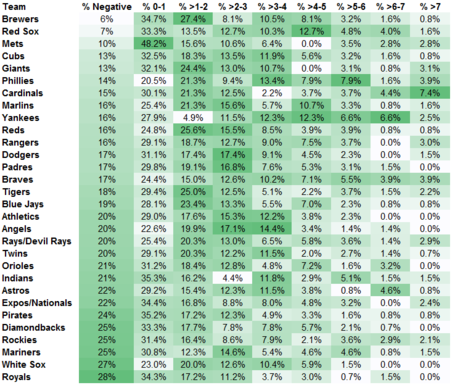 Tuesday, I wrote about trends in negative WAR position players in the league since 2002.

Generally speaking, about 20% of all players that accumulate >=100 plate appearances in a season will finish with negative Wins Above Replacement (using FanGraphs' measure for WAR).

In that analysis, I ranked teams in terms of the percent of players with >=100 PA's with negative WAR they had on their rosters relative to their total position players during that time frame.

A number of commentators here and at other sites asked about the distribution of positive WAR players by team.