An Infographic Timeline of 1,500-Strikeout Hitters

Share All sharing options for: An Infographic Timeline of 1,500-Strikeout Hitters

Babe Ruth was known as a high-strikeout hitter, and indeed, he led the majors in Ks 5 times, including in one season (1918) when he only batted 380 times. He retired as the all-time strikeout leader, with 1330. Yet today, the Bambino ranks just 99th all-time, right behind Dean Palmer.

Although no hitter passed 1,500 strikeouts until 1966, today 51 players have reached that milestone. To demonstrate the rise in strikeouts over time, I made a huge infographic that documents each 1,500-strikeout hitter. There are two previews below; click on either one to open up the full-size image.

The graphic itself should be fairly self-explanatory (I hope). 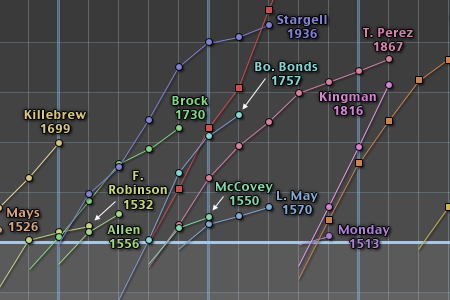 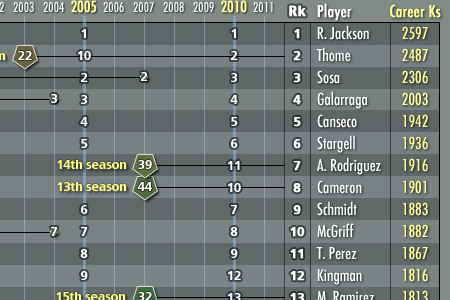 One interesting tidbit that I learned from making this is that the rise in high-strikeout hitters hasn't been consistent. There was a bit of a dropoff starting in the 80's and lasting until the mid-90's. Since then, though, hitters have been striking out like never before.

In case you're curious, several hitters look like good candidates to reach 1,500 strikeouts in 2012. Jason Giambi is just 20 Ks away, Ivan Rodriguez is 28 away, and Alfonso Soriano is 77 away.