Share All sharing options for: The Players Who Have Hit 8th (& 9th) Most Often Since 1919

The past few weeks, I've looked at the players who have hit most often in the 5th, 6th, and 7th spots in the batting order. This post focuses on the 8th spot, which is quite a different beast. 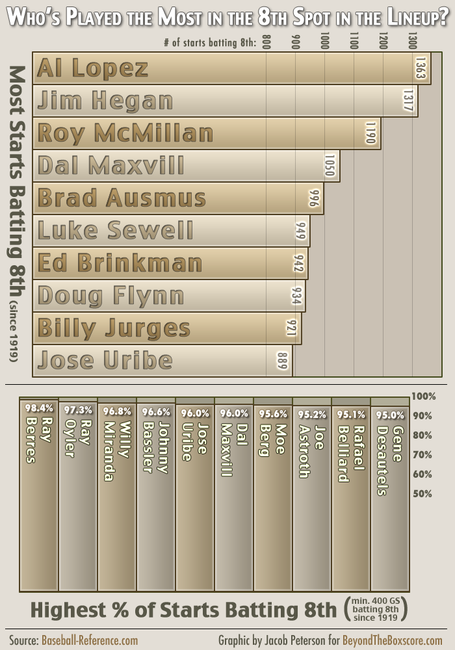 Compared to the other batting spots I've covered, the 8th spot is very well-defined. The totals are higher, and the percentages are much higher. There are a sizeable number of hitters that basically never batted anywhere but 8th. In all, 20 hitters batted 8th in at least 90% of their starts; for perspective, just 11 players hit 7th in even 50% of their starts. Only 2 players hit 6th in half of their starts.

Typically, the guys in the graphic above are terrible hitters who nonetheless played regularly because they offered strong defense at an important position (shortstop, 2nd base, or catcher).

Since some modern AL players have spent a lot of time hitting 9th, I also ran the numbers for the 8th and 9th spots combined. I give those numbers, as well as the ones for the 9th spot on its own, after the jump.

Before we look at the 9th spot, though, let's compare the 8th spot to the other parts of the batting order that I've researched. First, let's look at the number of players to have at least 400, 600, & 800 starts at each spot:

As you can see, the 8th spot is at least as likely as the 5th spot to produce long-term, stable hitters. At the high end of 800+ starts, there are actually many more hitters in the 8th spot, which indicates that it's easier for a hitter to get locked into the 8th spot for an entire career. (800 games is about 5 full seasons; the top player, Al Lopez, had almost 9 seasons in the 8th spot.)

Now let's look at the bottom-half batting order positions by percentage of games played (this is for players with 400 starts in a given spot):

In addition, 33 hitters batted 8th in at least 80% of their starts, something that no player did in any of the other 3 spots. What this means is that the players who batted 8th a lot generally had shorter careers than the guys on the other lists--which makes sense, because 8th hitters are, well, bad at hitting. When they did play, though, they almost never hit anywhere but 8th.

Okay, let's look at the leaderboards for the 8th & 9th spot combined. What I've done is find the combined starts in both spots and then subtracted out starts that a player made in the 8th spot in DH games (post 1973, in an AL park). In other words, this is the list of the 10 players to hit last in the lineup the most, not counting the pitcher.

Nothing too surprising here, though we get a much better mix of old & new players than in the graphic above. This list could also double as the worst 10 hitters to have long careers since 1919.

Now let's look at the players to hit last the highest percentage of the time (to qualify, a player must have hit either 8th or 9th at least 400 times). The list is pretty much the same as the one in the graphic above, with one notable exception:

Rey Ordoñez slips onto the list in 5th place. It's nice to have him there, as he's certainly the preeminent terrible hitter of the late 90's / early 00's. Rafael Belliard, part two, in other words.

Before subtracting out times hitting 8th with the DH rule in place, Ordoñez actually ranked 2nd, right between Ray Berres and Ray Oyler. To put it another way, if you don't make any qualifications, the top 3 players since 1919 in percentage of starts hitting 8th or 9th are all named Ray/Rey.

If you look at just the most times hitting 9th (for non-pitchers), here are the top 10 players. As you'd expect from the above list, Ozzie Guillen is #1:

These totals compare quite strongly with those for the 5th through 7th spots in the order (see table above), but they drop off quickly. Only 30 hitters have at least 400 starts hitting 9th. This makes sense, of course, since the DH has only been in place for ~40 years and only in one league.

I suspect that if you looked at the batting spots just in the AL since the DH rule was instituted, the 9th spot would be one of the most well-defined batting order positions. Next, here are the players with the highest percentage of starts hitting 9th (among those 30 with at least 400 starts there):

I'd love to field a team with all 10 of these guys on it. They wouldn't win many games, but when they did win one, man, the other team would feel so bad about itself.

Finally, I had a request to split off the 8th hitters for the NL and the AL in the DH era. So, here are links to the top hitters in the 8th spot in the AL and the NL.