Will J.P. Arencibia Ever Become a Good Regular?

J.P. Arencibia is off to a unique start in his career given his high ISO and low OBP. Historically, those type of catchers don't last too long. Can he?

Share All sharing options for: Will J.P. Arencibia Ever Become a Good Regular?

After belting 32 home runs at Triple-A Las Vegas and taking home the 2010 Pacific Coast League Most Valuable Player award, J.P. Arencibia appeared to be on the fast track to a starting catching job with the Toronto Blue Jays.

Two seasons into his career, though, Arencibia’s name has been in the rumor mill more often than it hasn’t.

One obvious reason is that the Blue Jays have top prospect Travis d’Arnaud waiting in the wings. However, d’Arnaud has an injury history, has no Major League experience, and is one of but many options the Jays have looked at to replace or split time with Arencibia.

Jose Molina, Jeff Mathis, Bobby Wilson, John Buck and Eli Whiteside have all spent a bit of time on the 40-man roster the past two seasons under the auspices of "catching depth." But if the Jays were at all interested in Arencibia in the long-term, it seems we would have heard d’Arnaud’s name in rumors at least once beyond that silly Jurickson Profar rumor from the early offseason.

Perhaps the situation is not a knock on Arencibia. After all, d’Arnaud is highly regarded, ranking anywhere from sixth to 37th depending on the site and time frame you pull from.

So what if Arencibia moves? What can an acquiring team expect? Is he in "he is who he is" territory as a mediocre-defense, high-power, low-OBP bat, or does he have some upside left at just 26 years old (27 when the season starts)?

As mentioned, Arencibia is a high-power, low-OBP catcher in the mold of many before him. Some numbers from the last two seasons:

It’s obvious that Arencibia has a problem with being over-aggressive, swinging too often, at bad pitches, and missing. Still, when he makes contact he hits the ball hard enough that he basically becomes a league-average catcher given a full workload. His defense improved this year, too, anecdotally and based on Fangraphs metrics, though I didn’t include this here because a) he’s still not very good and b) catching metrics seem to be fairly fickle still.

What Can He Become

You obviously can’t just suggest to Arencibia that he be more selective and retain his power. It’s certainly possible that an aggressive approach allows him to give each swing a full-go without fear of reprimanding for his K-rate (I could pull count data to try and back this up and show him as an early-count aggressor, but I don’t really have the time).

Since catchers are a rare breed, I thought I’d dig into B-Ref’s season finder to see some historically similar players through two years and how they progressed. I searched for catchers who, in their first two years, had an OBP less than .300 and an ISO greater than .175 (minimum 400 plate appearances). Arencibia was the only one.

So I loosened the thresholds to an OBP less than .325 and an ISO greater than .150. Now we have Arencibia plus 10 others, shown below.

As you can see, it’s not an encouraging list for Arencibia (or Wilin Rosario, for that matter).

Hold Up, Wait a Minute

At this point I realized that searching only for "2 years + 400 PA" was a bit off since, even though Arencibia still qualified, based on B-Ref’s application of "seasons" Arencibia has technically played three (he had a cup of coffee as a reward for his 2010 campaign).

When I loosened the criteria to "first three seasons" and "500 plate appearances," we get 19 results. The list includes Miguel Olivo, Lance Parrish, Jason Varitek, personal favorite Pat Borders, and some others who carved out semi-decent careers. Oh yeah, and Johnny Bench.

So, for catchers who, with at least 500 plate appearances in their first three seasons combined, and with OBPs under .325 and ISOs over .150, does Arencibia have a shot at improving and being more "good" than "meh"? 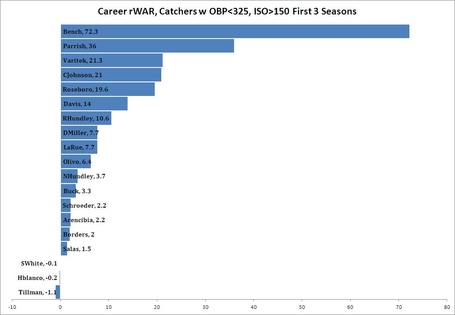 Sure, rWAR might not be the best gauge given the difficulties quantifying catcher defense. But the facts remain:

*Arencibia is off to a very unique start in his career.

*Johnny Bench did, but he also saw a huge spike in his OBP in Year 3, which Arencibia won’t.

With all of that in mind, it’s tough to envision Arencibia ever becoming an everyday catcher, at least one not in the Olivo mold of "yeah but we COULD upgrade." I hope he does, because I'm a big fan of the guy, but the evidence isn't encouraging.