There is no better way for a pitcher to communicate to a batter "I don't like you" than by planting a baseball in his ribs. And what better time to do it than when that batter homered off you in the previous at-bat? How often does this gruesome brand of revenge occur? Let's investigate.

There was an incident during the annual cross-town classic in Chicago this season that I've been wanting to investigate for a while now. It certainly won't lead to any 'sabermetric' discovery of the ages, but it is likely to satisfy some form of morbid baseball curiosity that I don't mind indulging from time to time.

It happened during the third inning of the game on May 18th, when Cubs starting pitcher Jeff Samardzija hit Paul Konerko with a pitch just below his left eye, after the veteran first baseman had homered in his previous at-bat.

It was a strange event, and there was a sort of uncomfortable uncertainty in the park afterward. It was though the fans weren't sure how to react. The Cubs-Sox rivalry is always tense, and an incident like this seemed to beg for the fans' worst behavior.

The timing was bad, for sure, and it made Samardzija appear guilty. But it was almost too obvious to believe it was intentional.

Was that on purpose? Right at his face? Right after he had hit a home run to take the lead?

But to be fair, it was apparent to most reasonable baseball fans, as well as to members of the White Sox clubhouse, that Samardzija did not intentionally hit Konerko. The pitch was, after all, a breaking-ball (a splitter, in fact), and the count had two strikes-- not the best evidence that it was intentional. Nevertheless, this did not prevent rampant, whispered accusations of a Samardzija 'headhunting' from stirring all across the city of Chicago.

What fueled most of this sentiment was the suggestion that Samardzija had allegedly plunked Atlanta Braves outfielder Jason Heyward for committing the same crime just two weeks earlier:

To be perfectly clear, I do not believe Jeff Samardzija is a headhunter, or that he deliberately retaliates against batters who hit home runs against him with an old-fashioned bean-ball. But I've read enough of baseball lore to know that this sort of cold, retaliatory attitude has had it's place in baseball's history, and I wanted to see if retrosheet could verify that with their play-by-play data.

I queried the event files for all games in which a pitcher surrendered a home run, and then subsequently (though not necessarily consequently) hit the same batter later in the game. The pitchers with the highest number of such occurrences in their career are as follows:

First of all, can I just say: Republicans, man. They are vicious.

Seven times in the retrosheet era the good congressman from Kentucky put one in the batter's ribs after that batter took him deep. This seems to fit his character profile as a pitcher, at least according to biographer Frank Dolson:

Talk to men who faced Jim Bunning, who stood 60 feet, 6 inches away from him armed with nothing but a piece of wood, ask them to chose one word that best describes him, and the word that keeps popping up is "mean."

...Take too hard a swing or take too long getting into the batter's box, and you'd better be prepared to duck.

So Bunning's placement at #1 on the list should be of no surprise to those who are aware of his reputation. But Jamie Moyer at #2 might raise a few eye brows. I mean, Jamie Moyer? Sweet, old Jamie Moyer? 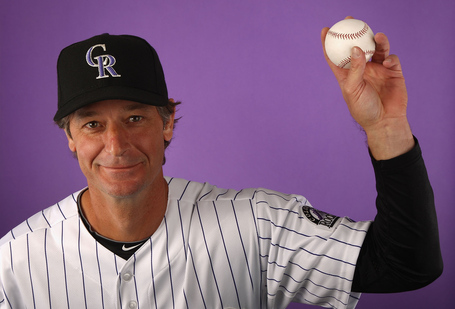 Moyer did have a tendency to target the inside portion of the plate often, but I've never gotten the impression that this was meant to intimidate (although, you see a blazing 79 mph fastball coming in at you, you never know...). I think what we are likely seeing here is simply the result of a pitcher who has logged many, many innings and has surrendered many, many home runs over the long stretch of his 67 seasons in the majors and counting.

Don Drysdale presence, however, is a no-brainer. His famous quip "You've Got To Be Mean to Pitch" pretty much sums up his philosophy from the mound. Along with Bob Gibson he basically epitomizes the ruthlessly intimidating style of pitching for which the 1960's are known.

Similarly, Fergie Jenkins to this day makes no bones about the fact that he intentionally "knocked people on their butt," but there are a few other names further down the list that may seem out of place.

In order to find a more modern version of the Ruthless Retaliator, though, I had to alter the query a little. In my second search I sought all home runs allowed that were immediately followed by a hit by pitch to the next batter, so long as it was the same pitcher in both plate appearances.

That's right, the Big Unit. Seven times in his career he (may or may not have) decided to indiscriminately punish a batter who's only crime was standing in the on-deck circle while his teammate knocked a ball made of cork, yarn, and leather over a fence. Johnson, who happens to be the modern era's HBP leader of course, was notorious for his intimidating batters for years with inside upper-90's fastballs. His unforgiving impulse to avenge himself has even led to the assault of poor defenseless animals.

John Lackey, incidentally, was the only pitcher I could find to have recorded two such 'retaliations' in the same game. On August 3rd, 2004, Lackey, then pitching for the Angels, plunked both Tori Hunter and Corey Koskie in the same inning, just two innings after both had taken him yard (also in the same inning). Now, I'm willing to give some of these pitchers the benefit of the doubt in a lot of these cases, especially the non-Bunnings, non-Drysdales, and non-Johnsons in these tables. But, John, do you mean to tell me you just happened to hit both guys after they both hit home runs off you?

I'd like to consider adding other means of measuring pitcher's retaliation to this fun little exercise, but beyond the two queries I've prepared here I'm stumped. If you have any ideas that can help expose some of the meanest, cruelest, most revenge-thirsty pitchers in baseball history, please leave a suggestion here in the comments or hit me up @JDGentile on Twitter, and I will be forever in your debt.