Can Philip Humber Regain His 2011 Form?

Besides throwing a no-hitter and having a career-best 3 WAR season in 2011, Philip Humber has been a replacement-level pitcher in his career. Is there any hope for him as we look to the 2013 season?

Share All sharing options for: Can Philip Humber Regain His 2011 Form?

Philip Humber isn't exactly a name that people were thinking of when it came to pitchers this off-season. But that didn't stop the Houston Astros from picking him up after the White Sox put him on waivers, while avoiding arbitration by signing him to a one year contract.

Humber throws a sinker, four-seam fastball, slider, change-up and curveball and since he struggled so severely in 2012, I checked to see if any of those pitches changed significantly from 2011. 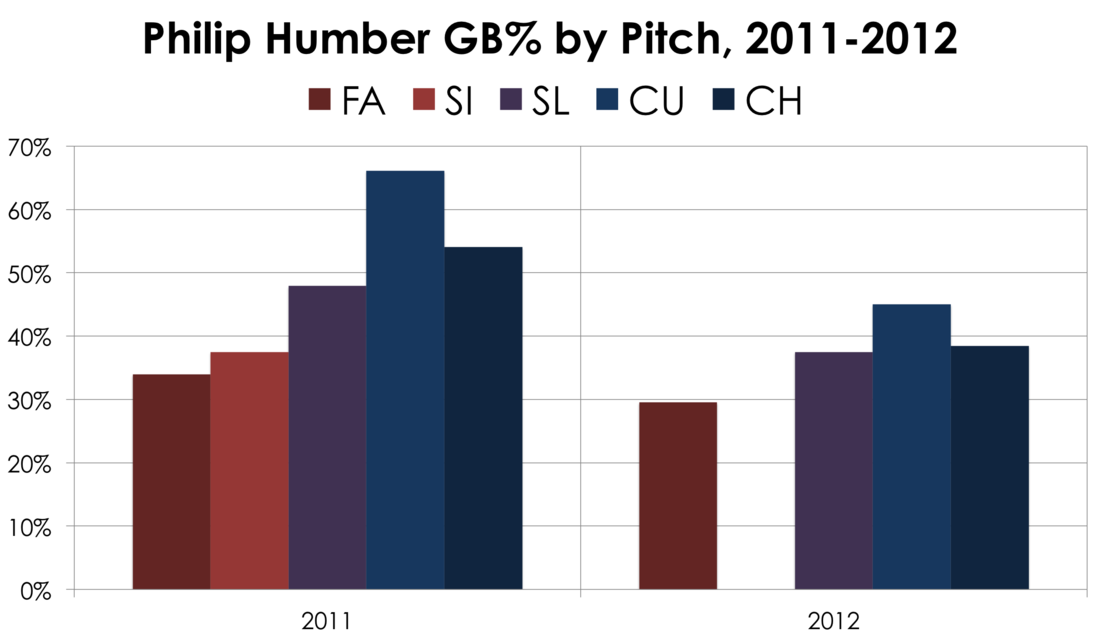 In 2012, however, Humber's curveball struggled at generating groundballs.

He induced grounders just 46% of the time, which put him at 82nd overall on the season. That's a pretty big difference.

For some reason Humber stopped throwing his sinker during the 2012 season. When he threw the sinker in 2011 it only generated groundballs 37% of the time. Overall his sinker's GB% ranked toward the bottom for all qualified pitchers, according to Baseball Prospectus. 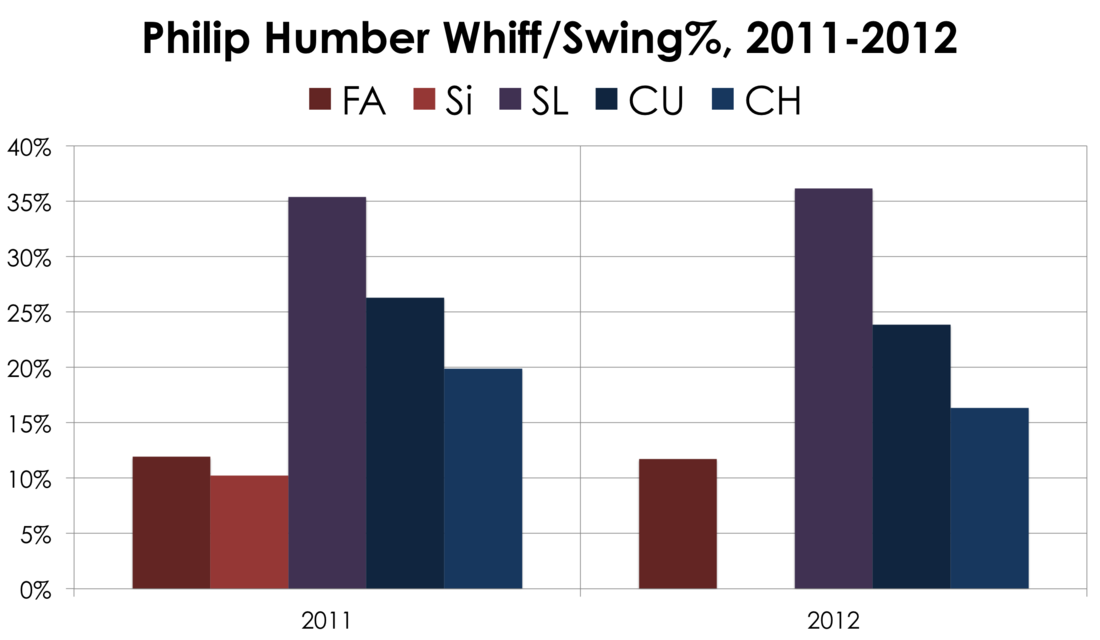 His slider didn't see any significant impacts in terms of whiff/swing%, in fact in only increased by roughly 1%. His curveball and change-up saw their whiff/swing% drop by almost 3%. Overall I'm not quite sure how significant that drop is though.

Even though Humber's whiff/swing% with his slider wasn't affected that much, he still had problems with his GB%, so I wanted to see if I could get to the bottom of it. Humber's change-up appeared to be getting a lot more horizontal movement, while some of his sliders were showing significantly less vertical movement.

First, I'd like to say that some of those pitches from 2012 are misclassified, and my best guess is that they are actually two-seam fastballs (according to Texas Leaguers, that is. Besides seeing a two-seamer on Texas Leaguers, I didn't think he threw one).

I also took a look at Humber's curveball, to see if there were any similar results.

In 2012 Humber's curveball was clustered as tightly together. If we look at his horizontal and vertical numbers we can see that vertically he didn't see a change at all. For those that are wondering, here are the numbers:

In 2012 his ISO when throwing his curve was .135, compared to .076 in 2011. I'm not sure what league-average ISO numbers are for specific pitches, but keep in mind a .150 ISO is considered average. He essentially declined across the board in every category.

Finally, the last pitch that I will look at is his change-up.

Batters actually hit for less power, their ISO went from .1 to .067, but they got on-base at a much higher clip. Opposing OBP went from .263 to .406. Overall he went preventing runs 34% better than average to giving up runs 43% worse than average. Not exactly the trend that you want to see.

If we take a look at his plate discipline profile we can see that batters swung out of the zone 3% less in 2012, but interestingly they made contact 3% more of the time. His overall zone percentage saw over a 2% decrease, and given the struggle he had with some of his pitches that doesn't come as a surprise.

Philip Humber is definitely an interesting case as we make our way to Spring Training 2013. He faced some struggles in 2012, but it seems like some of the struggles could be fixed. I don't know if he's a 3 WAR pitcher, but he could easily be a 2 WAR pitcher, which is still a good piece to have, especially considering Houston's current state.

Thanks to Texas Leaguers, FanGraphs, and Brooks Baseball for the data used in this analysis.