Edwin Jackson is a Chicago Cub

Share All sharing options for: Edwin Jackson is a Chicago Cub

The Cubs front office just doesn't quit working. Earlier in the month they signed Scott Feldman and Scott Baker to contracts, and yesterday it was reported that they signed Carlos Villanueva to a two year deal. (You can read my analysis of the Baker and Feldman deal here.)

But even after those signings, the team wasn't done. Today it has been reported that the Cubs have agreed to a four year, fifty-two million dollar contract with right-handed pitcher, Edwin Jackson. Jackson is coming off of a year where he struck out a career high 21% of batters, and walked 7%. His FIP was 3.85, and his fWAR was 2.7.

After five seasons of replacement-level to slightly below-average pitching, Edwin Jackson finally began to turn it on during the 2009 season. Since then he's accumulated 14.1 fWAR and has averaged a 3.88 FIP. That isn't a front-of-the-rotation starter, but it is definitely a serviceable 3/4 guy, depending on the team's rotation.

Let's take a look at how Jackson has remained successful the past few years. 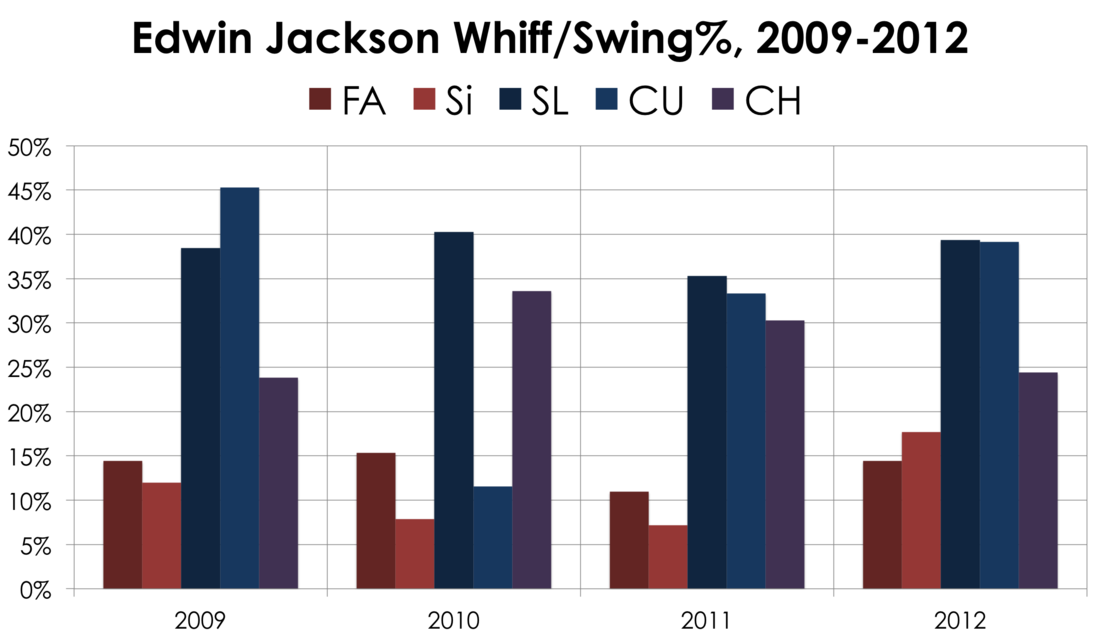 Jackson gets a lot of whiffs/swings when he's throwing his curveball. Besides 2011, he usually generates 38-40% on whiff/swings. After getting whiffs 45% of the time in 2009, he then saw that number take a sharp drop in 2010, but since then it has started to get back to those levels. His change-up also does a good job at generating whiffs, but in 2012 he saw that number decrease slightly.

Jackson isn't exactly a groundball pitcher, although in 2010 and 2012 he's had some fairly high groundball rates, so it'll be interesting to see how he performs in Wrigley Field. One thing he has struggled with is generating first pitch strikes. According to FanGraphs, f-strike% tends to hover around 59%. For his career Jackson has a 56 f-strike%, but in 2012 he saw his f-strike% sit above 60% for the first time.

The Cubs aren't like other teams, especially this off-season. The Cubs have essentially rebuilt their entire rotation in one off-season and they've done so by signing free agents, not by trade. It's the complete opposite of what a team like the Kansas City Royals are doing. So far the Royals have made two trades that had them getting pitchers back.

The first of these trades was the acquisition of Ervin Santana from the Los Angeles Angels, and the other was the blockbuster with Tampa Bay. As you know, James Shields and Wade Davis were acquired in that deal. Unlike the Royals, the Cubs get to keep all of their prospects, whereas the Royals had to give up top prospects Wil Myers and Jake Odorizzi.

Going forward, it will be interesting to see how these deals pay off, but what can be said is that the Chicago Cubs' front office has done one heck of a job. Acquiring four quality MLB starters without giving up any talent is nothing to sneeze at.