What Makes a Hall of Fame Umpire?

Former umpire Hank O'Day was recently chosen as a Hall of Famer, 77 years after his death. What makes a Hall of Fame umpire? Does O'Day fit the description?

Share All sharing options for: What Makes a Hall of Fame Umpire?

This year, the Veterans Committee selected three new Hall of Famers. That's a good thing, since I'm fairly certain the BBWAA won't be selecting anyone. Jacob Ruppert was the obvious inductee. It seems most people assumed he was already in the Hall of Fame. Deacon White was the selection I was really hoping for (though Bill Dahlen may have been even more deserving). The selection that really surprised me was umpire Hank O'Day.

There are many reasons for my surprise. First, O'Day was an umpire. In an era when we can't even elect arguably the best DH of all time, we've inducted our tenth umpire. Secondly, O'Day actually died 77 years ago. It's pretty rare for someone that far removed from the game to be inducted. At least with players, we still have their statistics to go by. In the case of Ruppert, there were tangible things to point to. For an umpire?

What even makes an umpire Hall-worthy?

I did the best thing I could think of—I pulled all of the text from each Hall of Fame umpire's plaque and put it in a word cloud. The result: 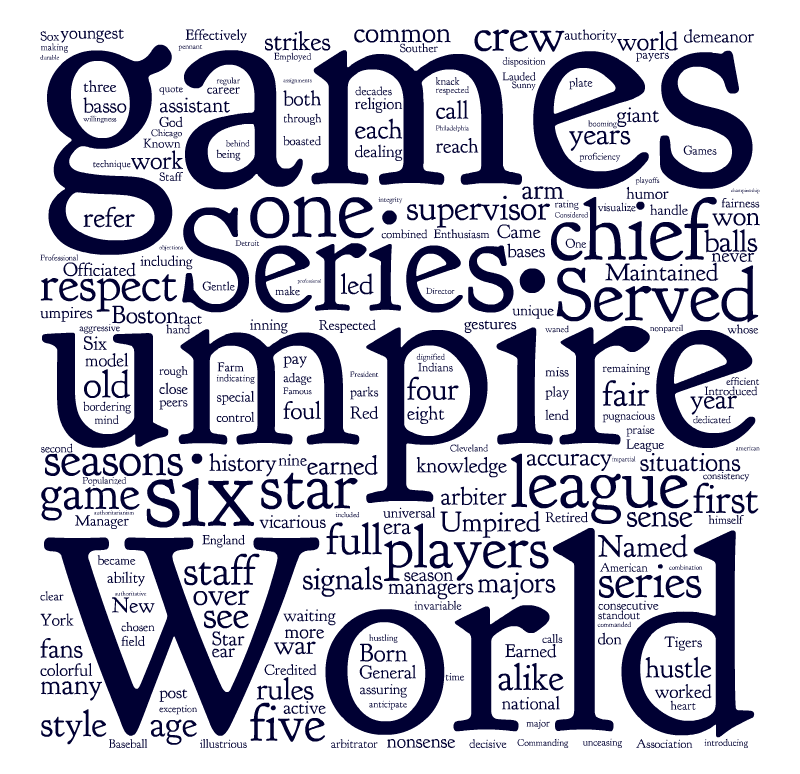 Is there anything else besides World Series games? For this, I went to each Hall of Fame umpire's Wikipedia page (excluding O'Day). I removed some common words (like their names and other common, insignificant terms) and got this: 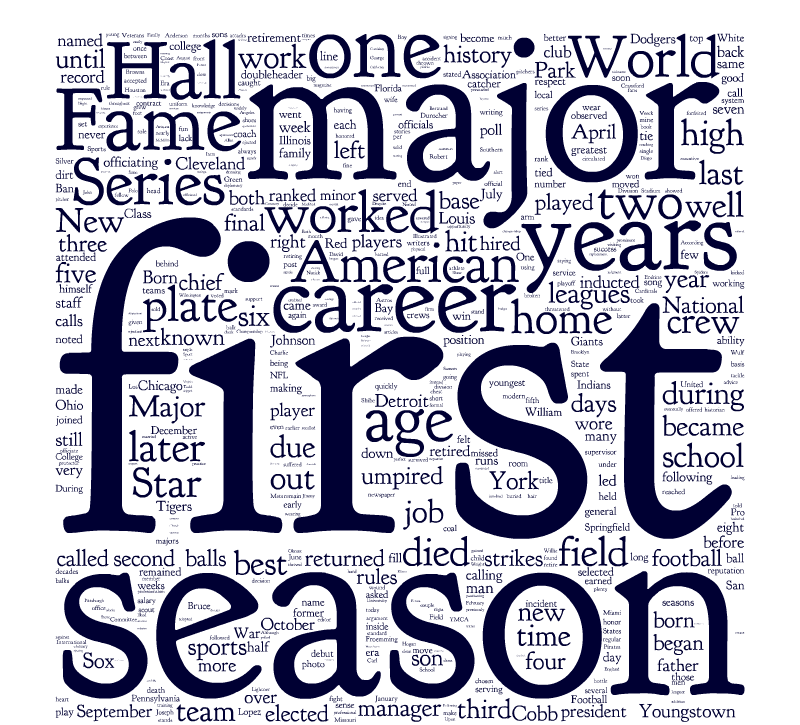 Being first is big. What was O'Day first at? Well, he happened to umpire the very first World Series. In fact, he officiated in five of the first seven fall classics. It is often cited that O'Day ruled on the infamous Fred Merkle play. I'm not sure how that actually helps his case, though name recognition is always a good thing.

I suppose that since O'Day had extensive World Series experience and was also the umpire in the first Series, he apparently fits the bill for what the Hall looks for.

Is there anyone else who should be considered using this approach?

Earlier, I mentioned Cy Rigler. Rigler's name pops up all over the umpiring leaderboards. He is tied for second (with O'Day) in World Series worked. In terms of World Series games officiated, Rigler ranks second (62) behind Klem (108). O'Day is third (57). Rigler is behind only Klem and O'Day in games worked behind home plate (with 2,468). Overall, he is 17th in games umpired (Klem is first while O'Day is 22nd).

Another interesting leaderboard that features this trio is the Ejections list. Klem ejected 256 men—the most ever. Rigler is second with 192 while O'Day ranks third with 185. Active umpires Bob Davidson and Joe West are next.

Should Cy Rigler be a Hall of Famer?

We've already established the fact that he has the proper World Series credentials, ranking second in games officiated and tied for second in total Series officiated.

How about firsts? Well, he umpired in the first All-Star game in 1933.

He had other skills, too (as evidenced in this bit from his Wikipedia entry):

He not only proved skilled in officiating, but also became an expert in the design and groundskeeping of ballparks, and he laid out many of the most important parks in Cuba and elsewhere in Latin America by the early 1910s. In 1912 he was laying out the ballfield at the University of Virginia, while also serving as an assistant coach at the school, when he discovered pitcher Eppa Rixey and signed him for the Philadelphia Phillies. The ensuing controversy over league umpires signing players for teams whose games they would be officiating led to the establishment of a rule barring umpires from also acting as scouts.

Rigler was also promoted to supervisor just two weeks before his untimely death from a brain tumor. The supervisor role is something that often gets umpires into the Hall of Fame, as Hall of Fame umpires Klem, Doug Harvey, Tom Connolly, Nestor Chylak, and Cal Hubbard all worked in chief/supervisor roles.

Also, while it may not quite be Merkle's boner, Rigler was the umpire who ruled on Sam Rice's controversial catch (when he tumbled over the wall) in the 1925 World Series.

Basically, if Hank O'Day is a Hall of Fame umpire, I'm not sure why Cy Rigler isn't. But, of course, this is a trap we can fall into over and over…

Hank O'Day photo via the Library of Congress on Flickr.