Results from this year's BtB 32 Predictions Contest, featuring a big win by Wesley M, a last-place finish by JBopp, and gratuitous use of the sparkly pony gif.

Way back in March, 313 people entered the 32 Predictions Contest, attempting to predict the 2012 season in a series of "which number will be larger" questions. Today you get the results. But first, some analysis.

Coins flips would be expected to score 16 out of 32 correct choices. The average score of these humans was 16.3. Seriously. When it comes to predicting what will happen in baseball, we're all a bunch of idiots.

It didn't help that the three questions that the crowd was most certain about ended up going to the underdog. Here's a complete list of the questions, with the winning side bordered in red. (Remember, ties go to the less popular choice.) 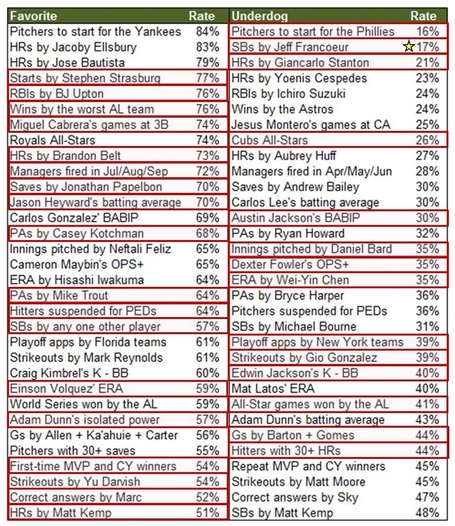 But enough delaying. Your 2012 winner of the Pink Pony goes to Wesley M, with a score of 24. Congrats, and use this gif well!

Normally I don't like to point out the losers, but when BtB Manager Justin Bopp is only one of two people to get only 8 correct, I make an exception. Way to go, boss!