Lineup Evolution Part 2: Is The #5 Hitter a Dying Breed?

Baseball managers have remained extremely loyal to the conventional wisdom throughout the years, and this stubbornness is never more apparent than when it comes to the ancient art of lineup construction. However, there is one unexpected trend that seems to be gaining popularity as the years pass.

Share All sharing options for: Lineup Evolution Part 2: Is The #5 Hitter a Dying Breed?

Naturally, one might expect that a very specialized role like the lead-off slot has likely gone through many more changes over the years than the other slots in the batting order. But only the data can set you free.

After a few reader requests I decided to break down the the next four spots in the batting order by average wRC+ per each season since 1950 when play-by-play data first became available: 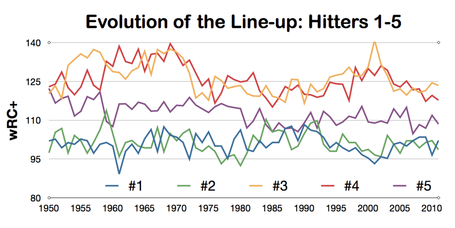 Again, there is a lot of information in this chart, so I encourage you to digest it slowly. The first thing that jumped out at me was the enormous gap between the hitters in the 1960's. The decade clearly appears to have been a sort of golden age for #3 and #4 type sluggers. High-profile superstar names like Mantle, Aaron, Killebrew, McCovey, Frank Robinson, and Yaz dominated the middle of the order and cast immense, dark shadows over the rest of the line-up card.

After everything seemed to 'normalize' once again in the 70's, an obvious and dramatic "tightening up" of the different roles developed in the run-scarce decade of the 1980's. Offenses seemed to become less dependent on their sluggers to score runs and instead turned to their #2 hitters and lead-off men for run production. In the early half of that decade, we see the #2 hitter, historically reserved only for players skilled with superior bat-control and a flare for 'productive outs', begin a steep climb towards relevancy. In fact, for a moment there in 1984, the #2 hitter even surpassed the #5 hitter in terms of offensive run production. The 2-hole continued to flex it's muscles into the following decade, until ultimately receding into the shadows once again in the mid-1990's.

The subsequent Hitter's Era at the turn of century once again gave rise to a powerful middle-of-the-order, though their dominance over their peers was not nearly as great as it had been in the 50's and 60's. Number three hitters did see, however, the greatest average wRC+ in the history of baseball for a very brief moment during those remarkable home run races of the early 2000's.

Some of this may seem rather obvious to you, as you are likely a knowledgeable and enthusiastic student of the history of the game. But I'm wondering how many of us have noticed the slow but steady decline of the #5 hitter over the years?

While the other lineup positions have traversed many hills and valleys in this past half-century, the #5 hitter is the only spot in the lineup that has demonstrated a consistent trend one way or the other. And curiously, the trend is downward.

In the 1950's the #5 hole in the lineup was valued almost as highly as the clean-up hitter. Since then, the value seems to have slowly evaporated from that role, culminating at a severe low-point In the 1980's when it was almost an insult to hit fifth in the lineup. The #5 batter was saved a bit in the 90's by Bonds's presence in the offensively-loaded Pittsburgh lineup, as well as McGwire with the similarly-stacked Oakland A's. But in more recent seasons the production levels have reverted back to the dark ages of 1980s.

This effect, however, oddly seems to owe very little to a lack of extraordinary seasons from the # 5-hole. In fact, we've seen two of the very best 5-hole seasons very recently in 2011, and one of the finest of its kind within the last decade:

Greatest wRC+ Seasons from the #5 Hole

It could be that managers are slowly learning to transfer their most potent weapons towards the front of the lineup, wisely awarding them more PA over the course of the season. But there is no clear indication that any of the slots in front of the #5 hitter have grown consistently better as a result. I'm banking on Beyond the Boxscore's wonderfully insightful and good-looking readers to explain this curious turn of events to me...

All data courtesy of the awesomely-provided retrosheet files.