Revisiting Dan Duquette and the Cutter

Back in August, Baltimore Orioles Executive Vice-President of Baseball Operations Dan Duquette created a buzz when he professed his distaste for the cutter, or cut fastball. He stated several reasons for his position: but could there be one simple reason that he did not mention directly?

Share All sharing options for: Revisiting Dan Duquette and the Cutter

The 2012 season was no doubt an exciting season to be a Baltimore Orioles fan. Despite less-than-favorable odds to compete in the tough American League East entering the season, the Orioles had a tremendous season that saw them earn a playoff birth as a Wild Card team. After winning the first ever AL Wild Card game, they pushed the Yankees to Game Five before bowing out in the ALDS.

In an interview in August with Steve Melewski of MASN, Orioles' Executive Vice-President of Baseball Operations of Dan Duquette spoke very frankly about the cut fastball, and how it fits with his developmental philosophies for pitchers.

"The philosophy of the organization is to encourage pitchers to develop a good delivery, command of their fastball, an off-speed pitch and a good breaking ball," Duquette said. "The first breaking ball that we work with our young pitchers on is a curveball. So that is basically the level of progression of our instruction and our organization philosophy.

"First of all, the cut fastball, we don't like it as a pitch, OK? And we don't like it for young pitchers because it takes away from the development of their curveball, which is a better pitch long-term and also, the velocity of their fastball. So we encourage development of an overhand breaking ball that has depth along with command of their fastball and, of course, velocity and movement will get the hitter out."

But in Bundy's case, the 19-year-old right-hander has said that is his best pitch. Have the Orioles taken away Bundy's top pitch?

"Why don't you take a look at the chart with the average against cutters in the big leagues, batting average against and then come back and tell me that that's a great pitch," Duquette said.

Duquette makes a number of statements here, piling on arguments against the cut fastball. Eno Sarris already nicely covered the batting average on cutters point as well as the developmental philosophy against the cutter for young pitchers.

The point that interests me the most here is the idea that he does not appear to be a fan of the cutter at any level. This is not just about not teaching it in the minor league system at the expense of the development of a curveball. He has a fundamental problem with the pitch and its effectiveness, even at the major league level.

There is one other reason that I can see that could be driving Duquette's feelings about the cut fastball. It has everything to do with how Orioles pitchers have been faring on the pitch in recent years.

Since the introduction of Pitch F/X part way through the 2007 season, data has been available that attempts to quantify success per type of pitch. These pitch type linear weight metrics aim at capturing the effectiveness of each type of pitch and representing this value with a number that shows how many runs were either saved or allowed on these pitches. Positive values indicate better than average performance, while negative values indicate worse than average performance.

I should note that there is a debate over the usefulness of the pitch type linear weights. Some of the issues with the metric are that it does not control for things like base/out states, nor does it capture pitch sequencing that can lead to subsequent pitches becoming more effective. It also does not compensate for factors like ballpark or the defense of the team behind the pitcher. While the data is not perfect, it is the best measure for quantifying success at the runs level by pitch type that we have for which I'm aware, and by averaging the data for each team over seasons, I hope that at least the in game situational differences even out.

In the first several years, up to and including the 2010 season, the Orioles as a team placed in the lower half of the league in both frequency of use of the cut fastball as well as value from the pitch based on these pitch type linear weights.

In the past two seasons, the Orioles have taken cutter inadequacy to new depths. According to Pitch F/X, the Orioles started to throw the cutter more as a pitching staff beginning in 2011, finishing in the upper half in the league in each season in usage of the pitch. However, the success achieved by all these extra cutters plummeted, as can be seen in the following graph. 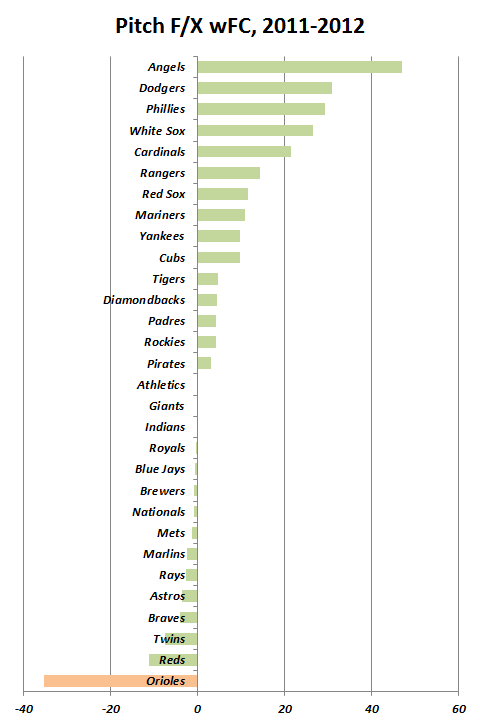 The Orioles as a team have been getting killed on the cutter like nobody's business over the past two seasons. As every ten runs tends to equate to about one win, their lackluster performance on cut fastballs over the past two seasons appears to be significant. The Orioles finished at the back of the pack in both overall value from the cutter as well as the standardized rate value per 100 cutters.

So are cut fastballs really not effective pitches? Using this same two year period, covering the most recent year of data Duquette would have had to analyze when he took over the position as well as data from his first year in his post, the data would suggest otherwise.

Could what Duquette have realized is not so much how effective the cutter is in general at the major league level, but that his Orioles are inept at the pitch?

If so, then stopping to throw the pitch is certainly one attempt at a solution. It would seem to me another, more reasonable approach, would be to dial back on the use of the cutter while simultaneously seeking to find a resource that could be brought into the organization to help teach or refine throwing cut fastballs, at least to some pitchers at the major league level.

Of current Orioles that could perceivably start in the coming season, Pitch F/X classifies Tommy Hunter, Brian Matusz and Chris Tillman as throwing the cutter, with only Hunter having held his own with the pitch over the past two seasons. An interesting note is that all three of these pitchers threw more cutters in 2012 than in the previous season, before Duquette arrived in Baltimore. They did not experience improvement in their results through this increased usage, either.

It is important to note that these metrics measure past performance, and thus are not designed to predict future success or lack thereof for particular pitchers using particular types of pitches. With the Orioles finishing in the basement in cut fastball prowess in each of the last two seasons though, perhaps Duquette feels that he's seen enough to decry the cutter.

It will be interesting to see how far this distaste extends. Will current Orioles pitchers start to throw the cutter less in 2013? Will Duquette avoid free agent starters that rely on the cutter in their pitch arsenal?