First Look: The Hall of Stats

If you like baseball history, sites loaded with comprehensive baseball statistics, and / or alternate halls of fame, then you'll probably want to check out Adam Darowski's new Hall of Stats site.

Share All sharing options for: First Look: The Hall of Stats

What if the Hall of Fame was based solely on a player's statistics, after taking into account the league-wide factors? Well, Adam Darowski has been asking that question for years, often here at Beyond the Boxscore. Building off his work with the Hall of wWAR, Adam's now launching a brand-new, stand-alone website called the Hall of Stats.

The Hall of Stats site has player pages for just about every player to ever grace the field, making it a similar reference, at least in overall scope, to necessary sites such as Baseball-Reference and FanGraphs. However, the HoS focuses on far fewer statistics. In short, it only cares about WAR, WAA, and adjusted variants. It then uses these to judge a player's overall worth with something called a "Hall Rating". If the Hall Rating sits above a score of 100, then the player earns entry into the distinguished Hall of Stats. If not, no dice.

If you're at all interested in the precise formula, look here.

Okay, so now that you know what the Hall of Stats is, basically, let's take a quick look at a player page, as shown below. 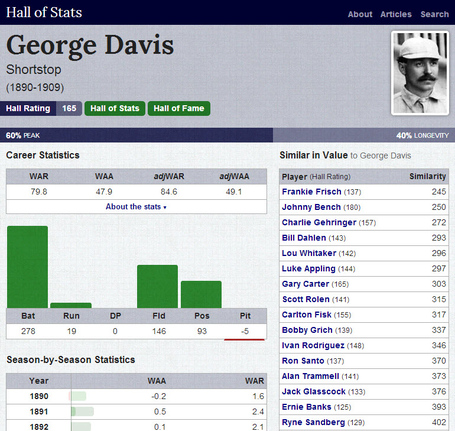 First of all, like everything about this site, I feel like the design is awesome. With the old-school photos of players, combined with the visualizations and color scheme, this looks clean and timeless. Major points there, and it makes it eminently readable.

There's a couple of really interesting things that jump out at me when you look at a player page. The first is a little bar at the top with gives percentage scores for "peak" and "longevity". As I understand it, this attempts to explain how much of a player's Hall Rating comes from career value (adjusted rWAR) and how much comes from peak value (adjusted rWAA). This ... is just awesome. I'd love to delve a little deeper into how accurate this is for specific players, but I think it's a phenomenal tidbit to examine.

Another special feature is the "similarity score" table on the right. Adam's similarity scores are a bit different than the ones developed by B-R and Bill James, in that they use adjusted stats instead of raw stats. The smaller the number (on the far right), the more similar two players are, in terms of statistical contributions. Honestly, I need more time to examine these similarity scores in depth, but for now it appears to be a fun toy to parse through.

Below is another player profile, but from someone who is less likely to make the Hall of Fame (or Hall of Stats), but is far, far more notable* in current events. 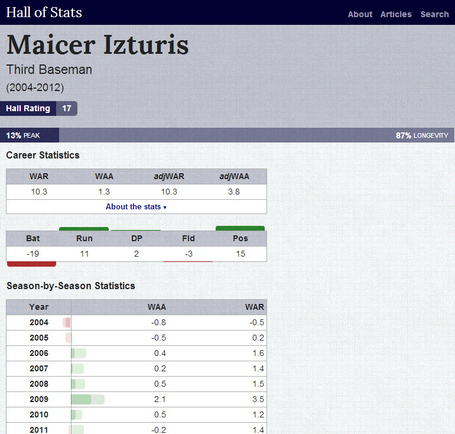 As you can see, Maicer Izturis is no George Davis. Since the Hall of Stats formula is a little complex, if one wants a solid explanation of how a player stacks up, they need to refer back to the formula and see how things shape up.

Or, conversely, they could click the "About the stats" link in the player's Career Statistics table at the top. 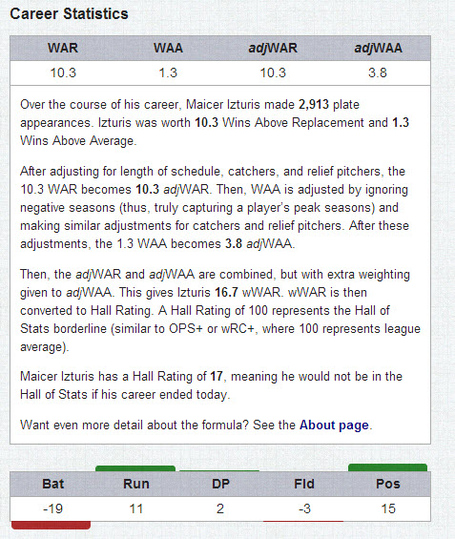 Holy hell, does that make this easy to understand. Not only does it explain the process used to calculate a player's Hall Rating, but it does so dynamically for the player in question. Quite simply, this might be the best overall part of the player page.

My biggest issue with the site (and it's really not so much an "issue" as it is a matter of preference), is the dependence on rWAR as the WAR measurement of choice for all players, through all time. I'd advocate something closer to, well, my WAR Index, or some other scaled measurement that takes into account either or both of fWAR and / or WARP (for the eras it exists) instead of solely using rWAR. rWAR, like all the other WARs, has its faults, and perhaps spreading the WAR values over multiple systems may increase accuracy, at the risk of decreasing precision. Unfortunately, if a critic of baseball stats or objective analysis hates WAR as a metric, or has consistent issues with rWAR specifically, they may not have much use for the Hall of Stats.

In closing, I'd advise any stathead or baseball fan to check out the Hall of Stats ... ESPECIALLY if you love baseball's glorious black-and-white past. I've often used Adam's articles and discussions of the Hall of Fame to examine more closely forgotten players and seasons.* Since I'll never be able to go back in time and watch the games themselves (especially the pre-1900s era -- even if we invent time travel, I'm sure I'll still miss something), I like the opportunity to still learn as much as possible about the history of our game. The Hall of Stats is a fabulous resource for one aspect of historical examination -- the use of statistics to tell the stories of particular player careers.

* Note: Unrelated to this, David Temple is doing a "lost seasons" series at The Platoon Advantage that is also awesome. Check that out too, assuming you have lots of time to read about hardball.

The Hall of Stats is a welcome addition to the sabersphere, and is probably the finest work Adam's done yet, which is really saying something. Stop by, check it out, and leave any of your stray thoughts and comments below!