A look at pitch mix of pitchers in years immediately preceding Tommy John surgery as compared to the league average pitcher.

Share All sharing options for: Tommy John Surgery and Pitch Frequency, Part I

The other day, I introduced what we believe to be the most complete list of baseball players that have undergone the UCL reconstruction procedure that has come to be commonly known as Tommy John surgery.

With a relatively large sample of major league pitchers on the list, there is ample opportunity for many different studies relating to the surgery. One area of interest for me is the mix of pitches that pitchers use in the years leading up to the surgery, as well as potential changes in pitch selection after the surgery has been performed. Today we will focus on just the first part of that topic: the pitch mix in the years immediately preceding Tommy John surgery.

For this study, I will use the Baseball Info Solutions data that has been available since 2002. By restricting my view to the pre-surgery years, it allows me to include any pitcher from the list that pitched in the major leagues leading up to their surgery since 2002, regardless of whether or not they successfully returned to pitching after the surgery and lengthy rehabilitation period.

The idea will be to compare the average pitcher that received Tommy John surgery to the league average pitcher with respect to pitch frequency. In order to attempt to make this comparison fairly, I will control for two factors that can significantly affect pitch selection.

The following two graphs show the breakdown of average pitch frequency by age for starting pitchers and relief pitchers. They serve to highlight the importance of controlling for these two factors in this comparison process. Note that cut fastball usage does tend to increase on average as pitchers age, while fastball and curveball usage tends to decline. 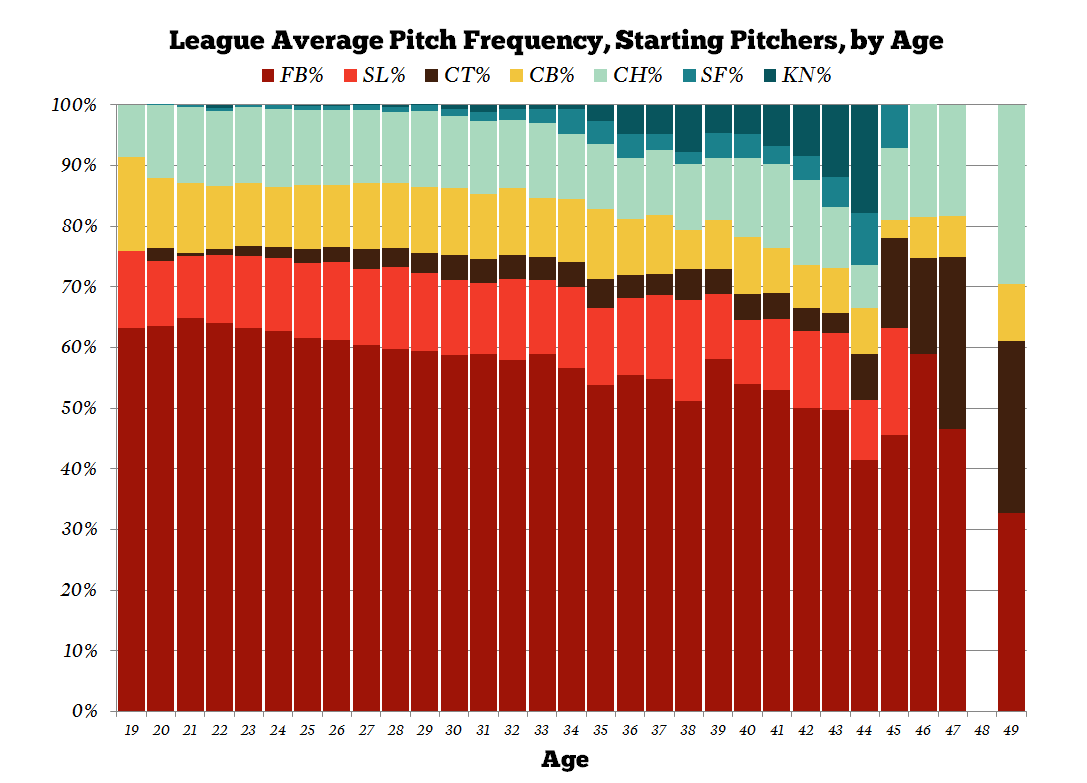 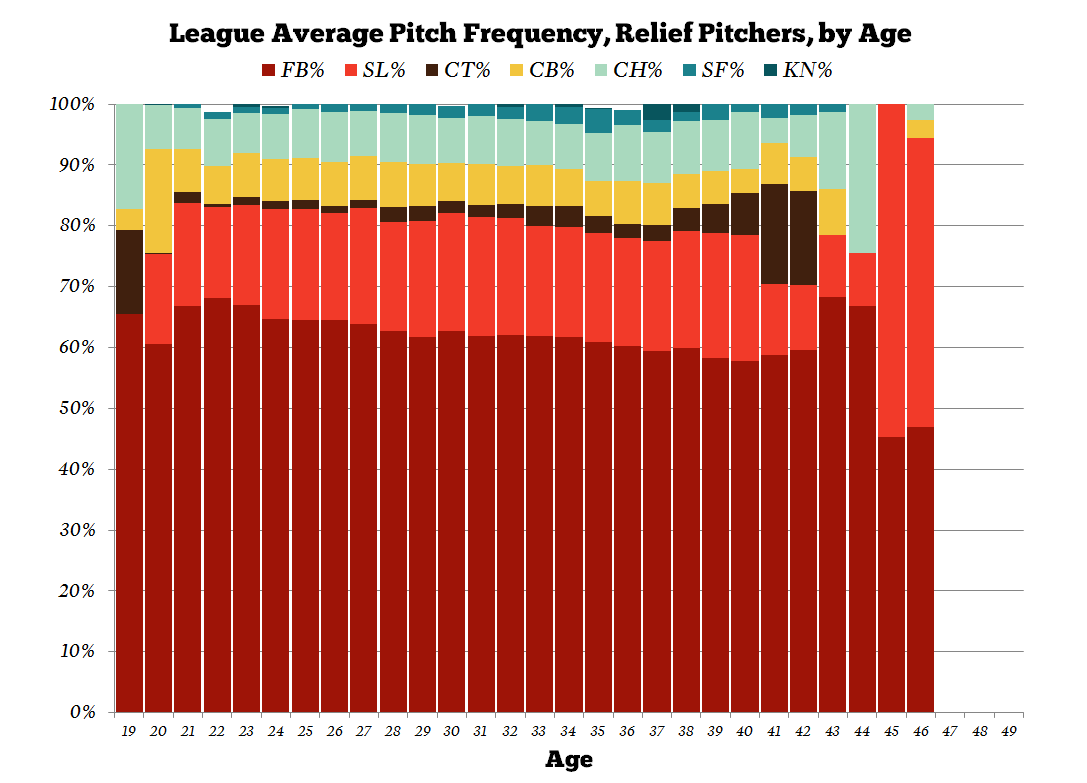 Finally, I will compare his age 28 Tommy John surgery season pitch mix to that of the league average relief pitcher of the same age. I will then take the average of all of these differences to form a pitch frequency profile of the average Tommy John pitcher in the three seasons leading up to his surgery as compared to the league average pitcher. Since each pitcher's pitch frequency delta is controlled for pitching role and age, I feel that I can take the average of the deltas of all Tommy John pitchers at this point without any further weighting. For the purposes of this study, I used every pitcher that appeared as a pitcher in the major leagues between 2002 and 2012. I defined a starting pitcher as any pitcher that started at least one game in a given season.

Here are the results of this comparison process:

The table indicates that the average pitcher headed toward Tommy John surgery tended to throw slightly more fastballs and sliders that his league average peer, at the expense of slightly less curveballs and changeups. In effect, for every 100 pitches thrown, one extra fastball and one extra slider are tossed instead of one curveball and one changeup. The difference does not appear to be earth shattering; however, the deltas are in the direction that seem logical.

Fastballs and sliders are the two pitches of the four that are thrown with the greatest velocities. It would seem to follow that they would on average exert more force on the elbow than the curveball and changeup. Per Wikipedia, a 2002 study of very young pitchers showed that slider usage increased the likelihood of elbow injury by 86%.

There certainly may still be some important dependent factors that I did not consider in this comparison process. If you have any ideas about ways to improve this study, please let me know. The magnitude of the results may not be overwhelming, and I cannot make any claims directly from this set of data, other than to say that the trend of the outcome did match my expectations.

In the near future I will look to complete the second, related part of this study, to see if pitchers who successfully return from Tommy John surgery to the big league level alter their pitch mix from their pre-surgery repertoire.