Where Does Fastball Velocity Come From? Part 1: Height and Weight

Few things in baseball are as exciting as a triple-digit fastball, and fewer things can get a scout's attention as quickly. Over the next few weeks, I will explore what physical and mechanical attributes may lead to fastball velocity.

Share All sharing options for: Where Does Fastball Velocity Come From? Part 1: Height and Weight

Sitting there on a hot, muggy July night, I wasn't exactly thrilled.

It was the 9th inning of a Carolina League game between the Carolina Mudcats and Myrtle Beach Pelicans, and not much had happened. It was a 2-1 game, and there had not been much for the scouts in attendance to take note of. Neither starting pitcher had made it past the 6th inning, meaning that we got a firsthand experience of the Single-A bullpen. In came what I expected to be another soft-tossing side-arm pitcher, destined to dominate the Carolina League and nothing else.

Instead, I got quite the opposite.

Trey Haley, former 2nd round pick by the Cleveland Indians, touched 97 with his first fastball. Now I was watching. He hit 97, then 96, then he hit 98. I remember thinking to myself, what exactly gives a person the ability to throw upper 90s? Is it pure muscle, height, and work ethic? Is it mechanics? Hell if I knew.

In this series I will attempt to figure out what I couldn't on that night in Zebulon, North Carolina. What is it that gives pitchers the ability to throw so damn hard?

Scouts will often look at a pitcher's body and refer to it as a projectable frame, meaning that the pitcher has room to add some weight and fastball velocity with it. Such examples of this would be a 6'3 180 lb guy, or a 6'4 175 one. So one could presume that the majority of Major League pitchers have filled out their projectable frames, and are now fully grown into their bodies.

I ran a quick study of starters from 2007-2012 and their heights and fastball velocities, which should show if there is a relationship between height and velocity. I chose starting pitchers because typically they have to throw many more pitches than relievers, meaning that they cannot throw max effort with each fastball. The results from this study show practically no correlation in either direction between height (inches) and fastball velocity: 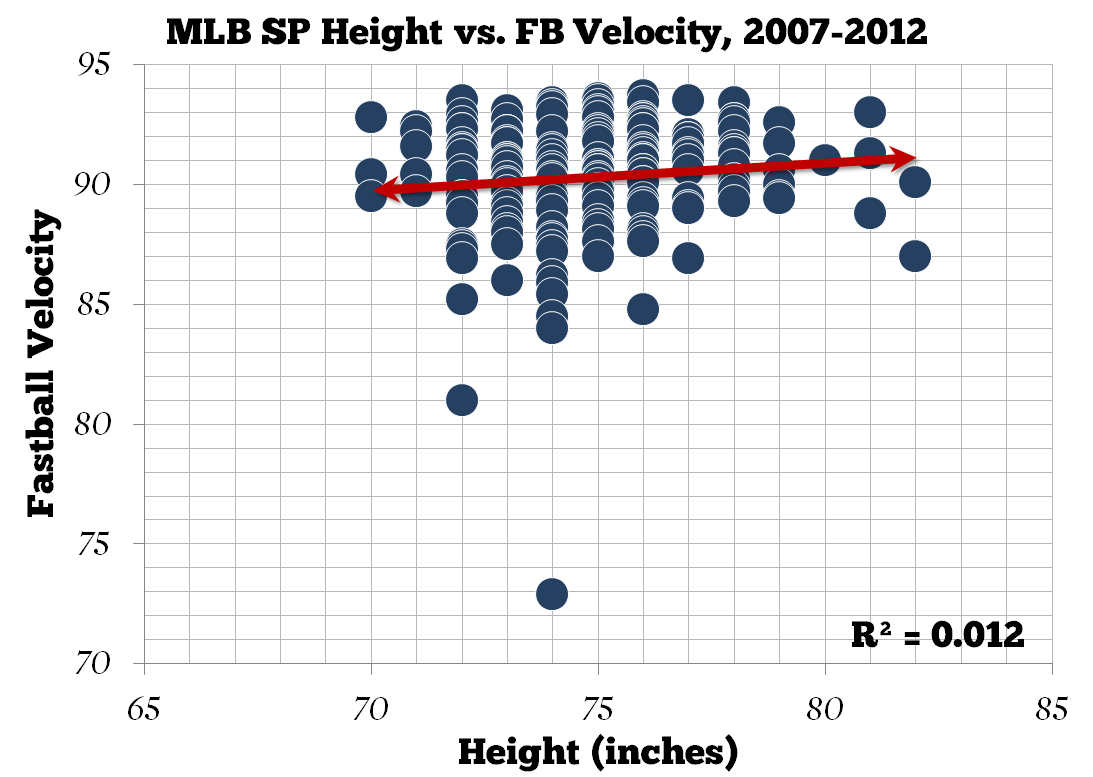 As one can see from the R-squared of 0.012, there is no relationship between height and fastball velocity. That is to be expected as there are many different forms of a 6'3, all of which could fall on different ends of the weight spectrum. Because of this, I ran the numbers for weight-fastball correlation, but ended up with similar results (weight measured in lbs): 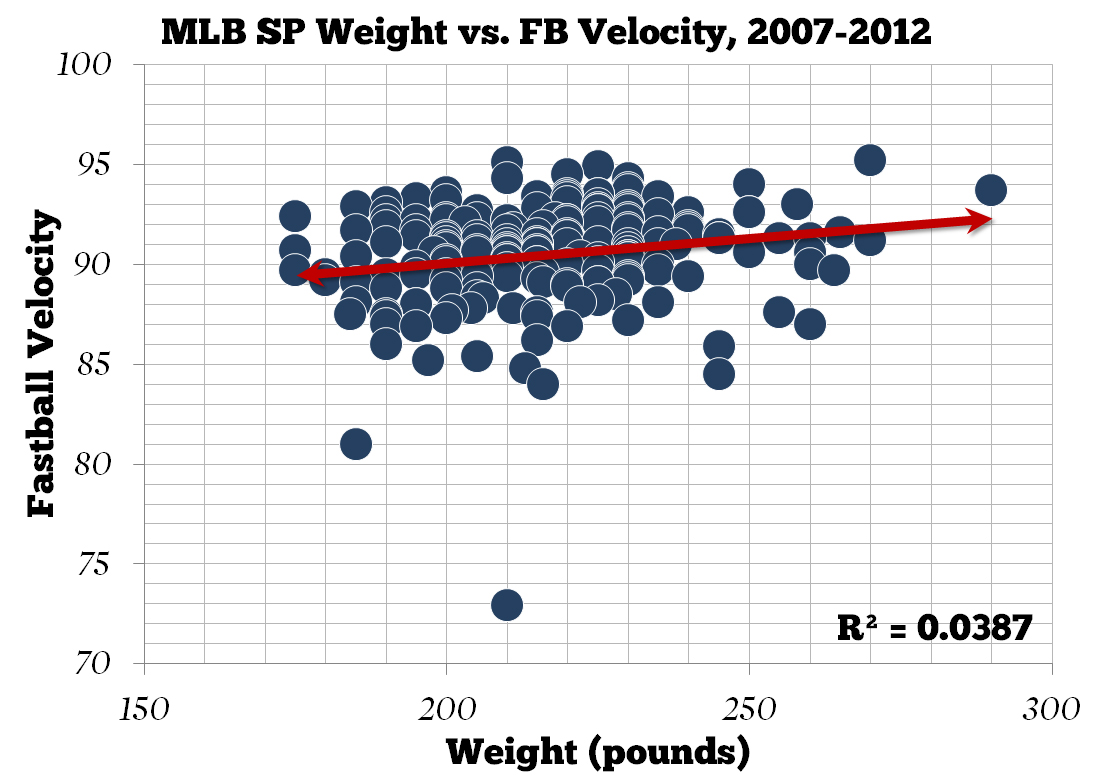 Well, maybe this is going to be harder than I thought. On the bright side the R-squared was three times higher this time, but on the not-so-bright side it is still just a minuscule .0387. It does make sense that weight is not closely related to fastball velocity, as Derek Holland sitting at 195 lb throws much harder than the 245 lb Livan Hernandez.

I figured that even though neither weight nor height correlated with velocity, that maybe I should combine them and see if that is a better figure. I simply calculated the lb/inches for each player, and then ran that with fastball velocity to see if there was a relationship: 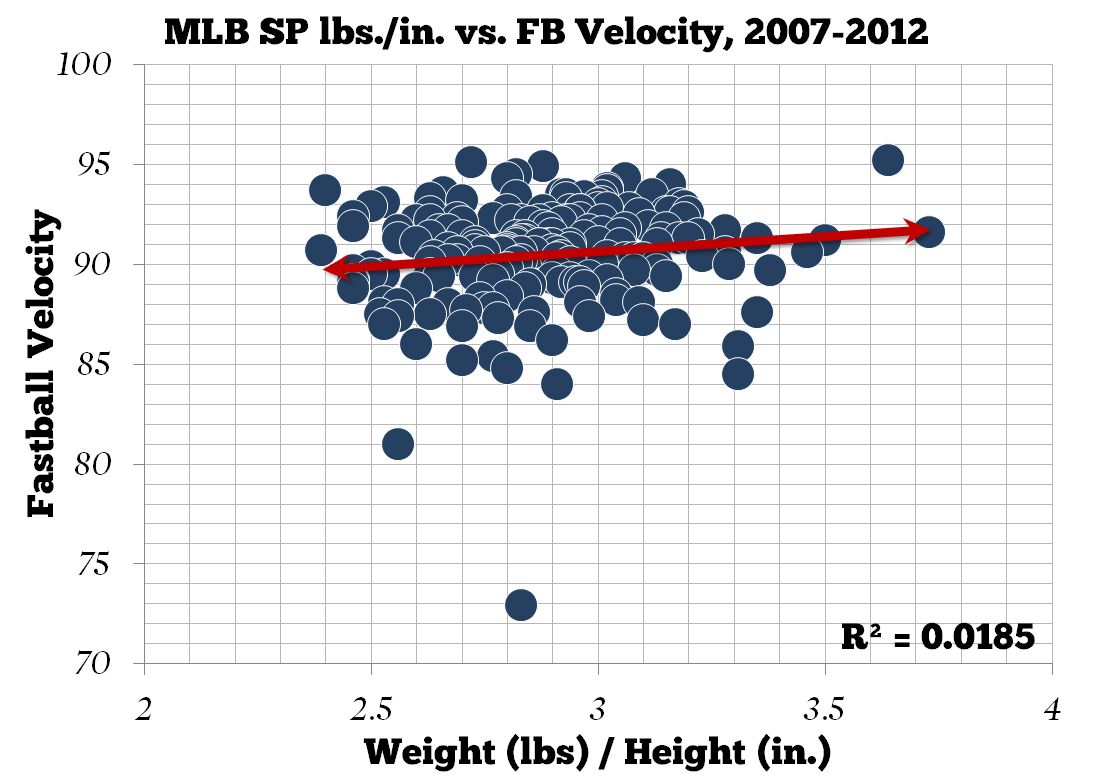 Well, it appears as though this was no more useful than either of them alone. After all this I know about as much as I knew before. Based on this sample of data from 07-12, I can surmise that weight and height have next to no effect on the velocity of a pitcher's fastball, and pitchers from all ends of the weight and height spectrum can throw hard.

In the next installment, I will take a look at certain mechanical attributes that might lead to harder fastballs.