Anibal Sanchez could be a nice bargain this off-season.

In the summer of 2007, Anibal Sanchez underwent labrum surgery. It took him a couple of years to put it together, but the past few seasons he's seen the results. Now he's a free agent -- and is waiting to get paid.

Share All sharing options for: Anibal Sanchez could be a nice bargain this off-season.

Anibal Sanchez first jumped onto the scene in 2006 when he threw a no-hitter against the Arizona Diamondbacks in his thirteenth major league start. The future appeared bright for the young rookie. In the summer of 2007 things went downhill though. On June 21 it was reported that Sanchez would undergo torn labrum surgery. He would return on July 31, 2008.

When a pitcher gets surgery, especially something severe as a torn labrum, one would think that the pitcher's velocity would be affected. When I went on to Brooks Baseball I was surprised at the results I discovered. 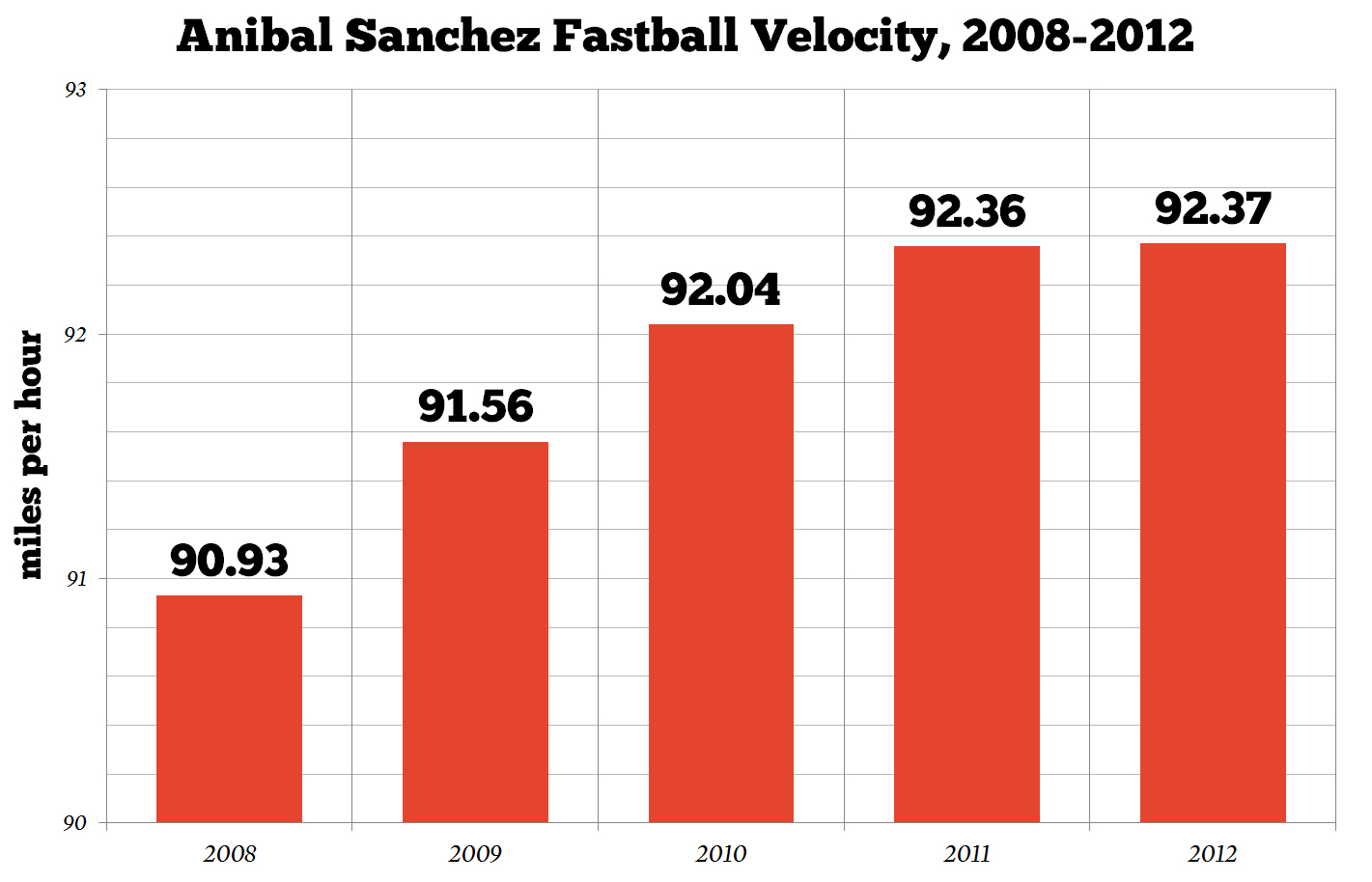 That's almost 2 MPH more than his first season back from his injury. I haven't seen any studies done, but I imagine that a 2 MPH gain is pretty significant. Maybe i will look into that down the line.

Since 2010 he's posted a walk rate slightly above 7%, while striking out roughly 21% of all batters faced. His 8.3 HR/FB% was right around average, and was a big to his FIP. Overall Anibal Sanchez's 85 FIP- ranked 15 since 2010. For a guy that you don't hear a ton about, that's pretty darn good. His 45% groundball percentage is essentially league average, as his 71% left on-base percentage. 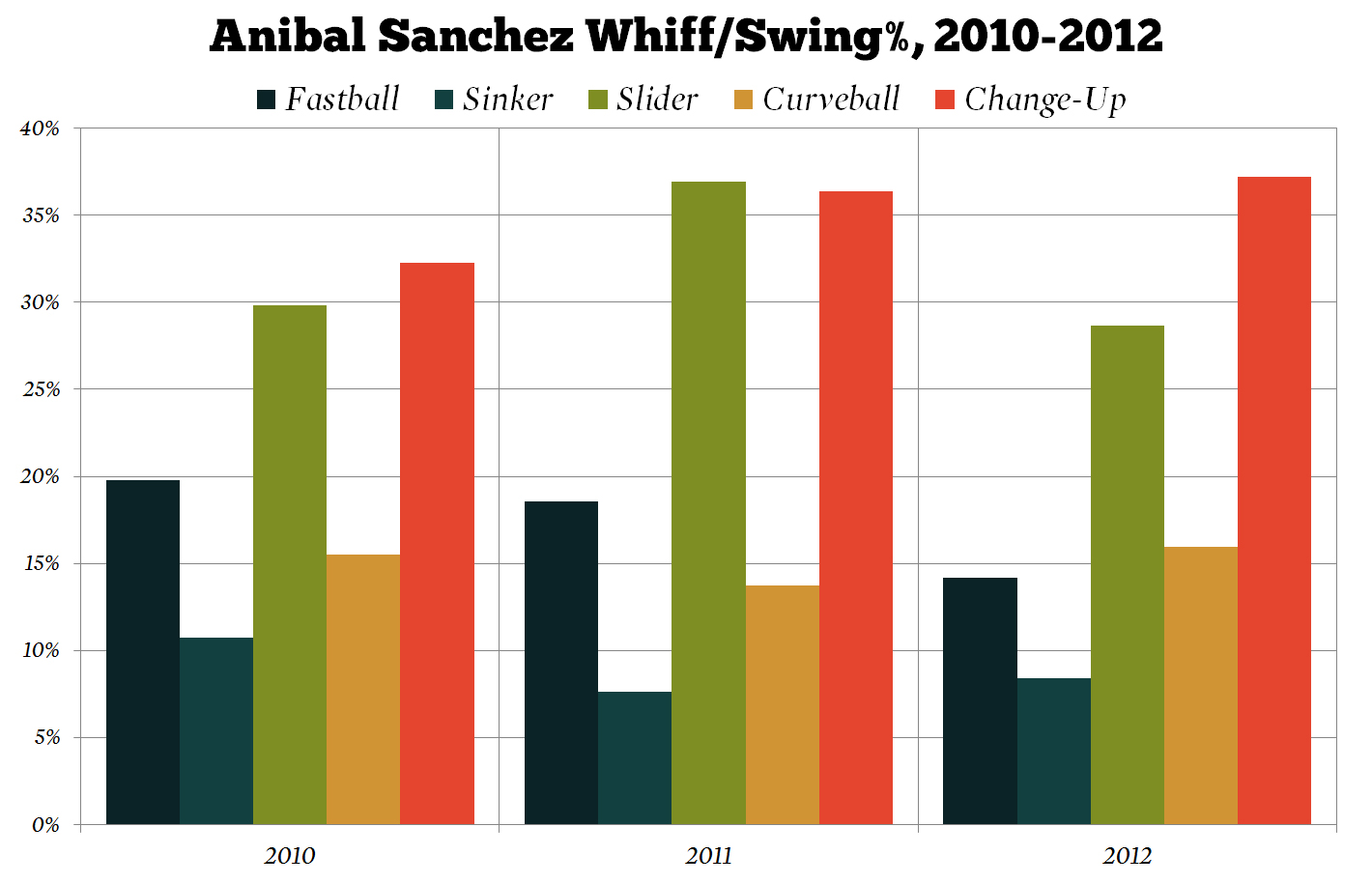 The past few seasons, Sanchez has seen the whiff/swing% on his change-up slowly increase. In 2010 it was around 32%, and just this past year it was at 36%. He's also seen his slider generate some pretty good whiffs, although in 2012 it fell to around 28%. One could say that in 2011 peaked, so it's possible 28% is around what we can expect as we go forward. 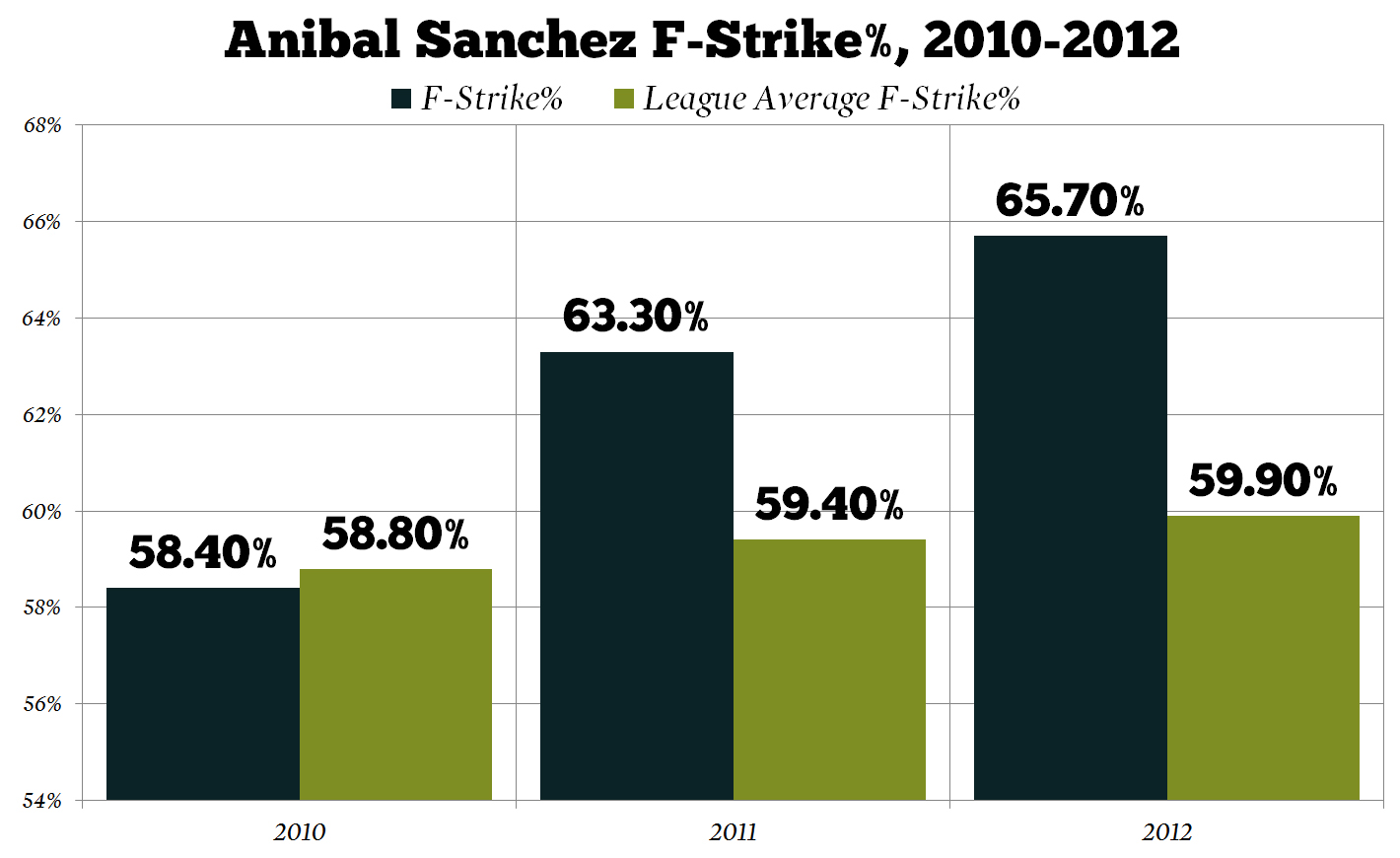 in 2010, Anibal Sanchez''s f-strike% was essentially league average. It was 58.4%, compared to a league average one of 58.8%. The following year he it spike up to 63.3%, and in 2012 it rose even more, finishing at 65.7% Obviously pitching becomes a lot easier when you're able to generate first pitch strikes. Sanchez saw an impressive improvement after his surgery. Before his surgery, and a year or so after, his f-strike% sat around the low to mid 50s.

There are a few teams that could use a pitcher like Sanchez. The Tigers, who acquired him during the deadline, could look to bring him back, but they already have Justin Verlander, Max Scherzer, and Doug Fister. Rick Porcello also had a solid year. Still, one can never have too much pitching.

The Red Sox and Cubs could also use pitching. The Cubs backed out of the Dan Haren deal, and their starters aren't that great. Boston was also rumored to be in on Haren, and they may also take a stab at Sanchez.

Finally, if the Angels aren't able to sign Greinke they may also take a flier on Sanchez.

This is all pure speculation on my part, and in the end I could see Sanchez receiving a 4 year deal for around $50 million dollars. If he can stay healthy, and continue his success from the three seasons that would turn out to be a fantastic deal.