Since Tommy John's groundbreaking surgery in 1974, hundreds of baseball players have undergone the same procedure. In this article we present a more complete list of these players than appears to be publicly available.

By now, everyone knows the story about Tommy John. In 1974, Dr. Frank Jobe performed ulnar collateral ligament reconstruction surgery on his left arm, a procedure that would forever be associated with John and allow him to extend his career another 14 seasons.

Since that time, hundreds of baseball players across many different levels have undergone the same procedure in an effort to rebuild their arms and sustain their baseball careers. Not surprisingly, most of these players are pitchers, who exert the most force on their elbows with the repeated throwing motion that defines their position.

In searching for a list of players who had undergone Tommy John surgery, I was surprised to find that there did not appear to be any one website that published a list that even attempted to capture all such players. Baseball Prospectus does list Tommy John surgeries for many players in the beta version of their Injury History section on individual player cards. MLBDepthCharts has a good list of players, but it only covers from 2010 to present. While combined these account for a solid list of names, there are many more to be found one and two at a time, at dozens upon dozens of sources around the web.

I started compiling a list, and eventually came across this post from Jeff Zimmerman, on Beyond the Boxscore no less (before I started here!), seeking public assistance toward the same endeavor. At this point my search was already winding down, so I completed the process as I had intended. Since that time, Jeff and I have been in contact, and have merged our two lists into one more complete list.

As of today, that list consists of 488 names of players who we can confirm with reasonable certainty underwent Tommy John surgery. The other criteria to make the list is that I had to be able to confirm with reasonable certainly at least the year of the surgery. In many cases, I have the exact date of the surgery. This additional requirement is what added a great deal of effort to the search process.

It should be noted that as this was a very manual process, it is certainly possible that there could be some data entry errors within the table.

Jeff Zimmerman has done fantastic work already in the injury field, and maintains an excellent website called Baseball Heat Maps where he has an entire section dedicated to DL and Injury Articles as well as a Disabled List Database. This seems like a perfect place for the list to live. In this case, I use the word live purposefully, as I hope this table will act as a living document and will continue to have names added to it over time. There will be a comment area below the list that may serve as an arena for public additions to the list. There is a separate tab on the spreadsheet, called Unconfirmed Dates and Surgeries, where we list those players who are missing one or both of the two requirements to make the list. If anyone is able to confirm a surgery and a date for anyone on that list, that would also be beneficial.

It is important to understand that by no means do we pretend that this is a complete list. It is the most complete list that I have seen, and if you have access to a better list then please let us know!

Armed with the list, there are now many possibilities for studies involving pitchers and Tommy John surgeries. At least some of this work has started in earnest. An area that I plan to explore involves looking at pitch mix and frequency used by pitchers both before and after the surgeries.

While not every player who has undergone Tommy John surgery will have been captured in this list, we can break down this current snapshot in a couple of simple ways: by year and by team. We can think of these totals as minimums. 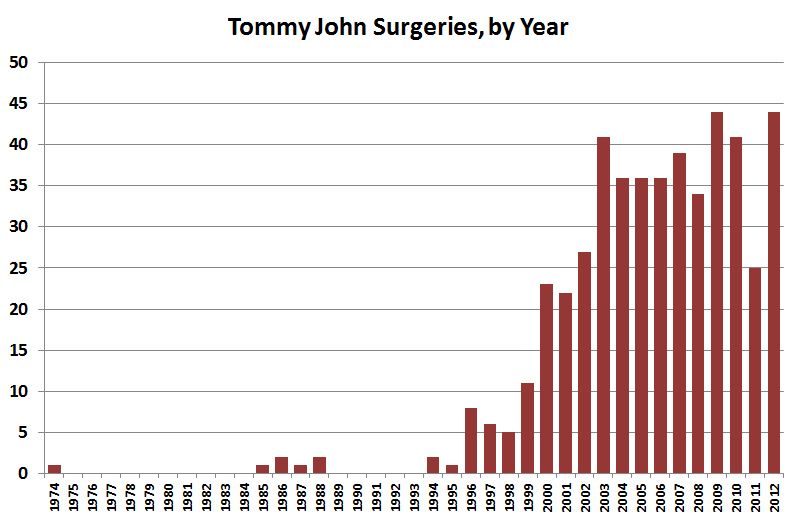 Not surprisingly, the totals in the pre-internet era are very low. I anticipated that there may have been fewer Tommy John surgeries performed in that period, but certainly there would be under reporting as well without the ease of information sharing that exists today. It is interesting to see that the number of surgeries uncovered over the last decade appears to be fairly stable year-to-year. I had suspected to see many more in the past few years, mostly because it would be easier to find such information, but also because I expected a greater willingness to undergo the procedure as the sample of pitchers that have returned successfully from the surgery grows each year. 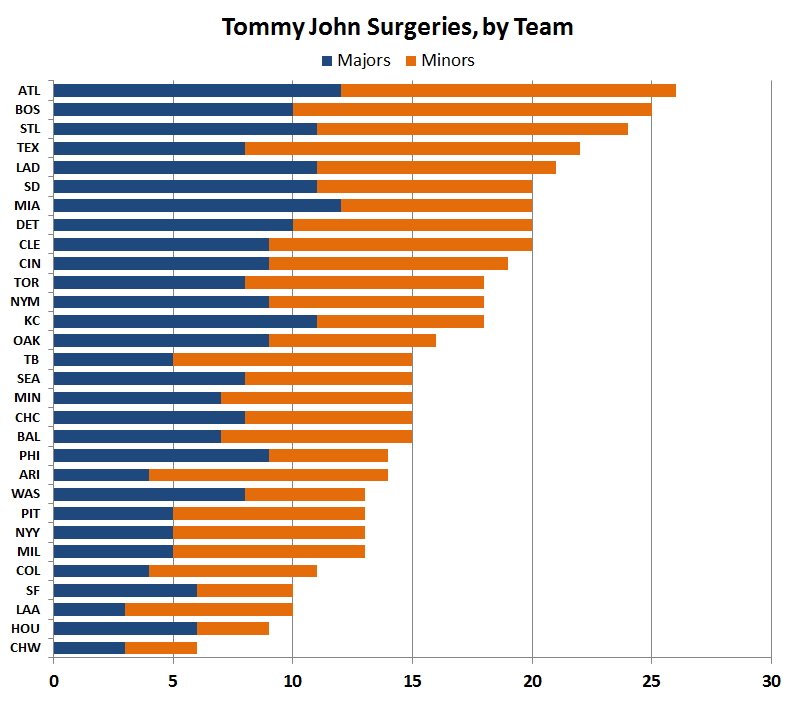 It is important to remind you that the team listed for each player is the team for which they last played prior to the Tommy John surgery. This means that a pitcher could have been drafted and developed in organization A for six years, only to move on to organization B in his seventh season. If he were to have submit to surgery just a month into his seventh season, he would be still be listed here under organization B. I feel this is important to recognize for those who are interested in trying to form a link between a quantity of surgeries and the development/training philosophies of a particular team.

That being said, it is not surprising to me to see the Chicago White Sox as having the fewest names on the current list. While pitching coach Don Cooper does not appear to be a fan of incorporating new biomechanics research into his system, he does have a solid track record to fall back on with respect to his pitchers' health. Much has been written about the importance of long time White Sox trainer, Herm Schneider, and his success at keeping his players on the field.

If you have additions or corrections to the list, please leave a comment there or below this article. If you have updates but cannot find the link, you can contact Jon Roegele at @MLBPlayerAnalys with the information. We will do our best to periodically update the list.

Other Interesting Discoveries from my Search Process

Thanks to Jeff Zimmerman for collaborating on the creation of this list. Credit and thanks to Baseball Prospectus, MLBDepthCharts and Baseball Reference for publishing data upon which part of this list was generated and confirmed.