In the final installment of Beyond the Box Score's 2012 awards, we offer our picks for the National League's best overall players.

Without further ado, here are the results: (click to embiggen) 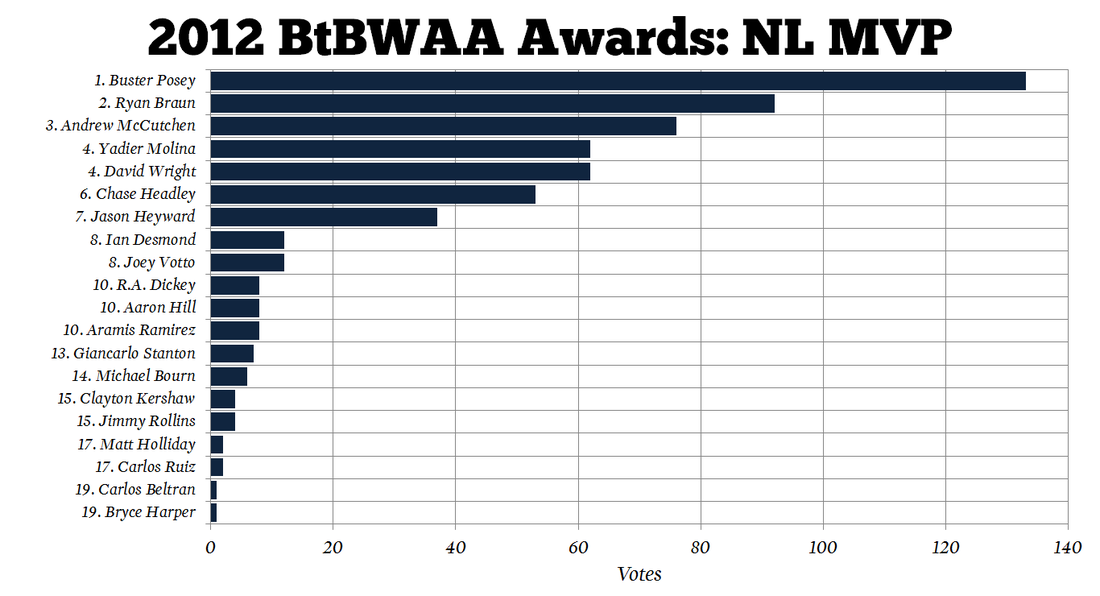 Ladies and gentlemen, your 2012 NL MVP is Buster Posey! Of course, you already knew that because the BBWAA announced it two weeks ago. But now we've offered our affirmation, with nine out of our 10 voters putting him atop our ballots.

Moving down the list, it looks like the BBWAA got the next few spots right too. Reigning MVP Ryan Braun (the recipient of the other first-place vote) comes in second, followed by Andrew McCutchen taking home the bronze. We also agreed about Yadier Molina coming in fourth, though we have him tied with David Wright (who tied for sixth in real life).

In tabulating the results, I was fascinated by how quickly and dramatically our consensus falls apart after the first six or seven picks. Posey, Braun, McCutchen, Molina, and Wright each appeared on all 10 ballots, but we stopped agreeing shortly after. Players ranked as highly as eight-place finishers Ian Desmond and Joey Votto appeared on only four of our 10 ballots.

As this series comes to a close, I'd like to thank and recognize our voters: Glenn DuPaul, James Gentile, Bryan Grosnick, Alex Keinholz, Julian Levine, Blake Murphy, Bill Petti, Lewie Pollis, Spencer Schneier, and Nathaniel Stoltz. Thank you all for taking the time to vote for 11 different award categories. Feel free to harass everyone except me if you think we screwed up!