Albert Pujols' plate discipline has been declining at a startling rate, but is that decline really that abnormal when compared to other recent greats?

Share All sharing options for: Albert Pujols' Walk Rate: Compared to other greats

A few weeks ago, I wrote about Albert Pujols' dwindling plate discipline.

In that piece, I noted how Pujols' declining walk rate and increasing percentage of swings on pitches out of the zone, was strange for his age in comparison to other hitters.

Bill Petti's research has shown that age-32 seems to be the peak year for hitters, in terms of plate discipline. However, Pujols' age-32 season (last year, 2012) was, in fact, his worst season, in terms of controlling the strike zone.

Petti's research was really great; however, he was sort of handcuffed by PITCH f/x data, which only dates back to 2007. We can really only get a picture of how plate discipline ages for those seasons.

Among hitters with at least 1000 PAs in their career, Pujols' wRC+ (164) is 64 percent above average and ranks as 9th-highest of all time.

I moved away from comparing Pujols to the average major league hitter, and instead opted to look at how Pujols' declining walk rate compared to some of the all-time greats.

I did this with this question in mind:

Is it possible that walk rates peak early for historically great hitters?

Great hitters tend to reach the majors at an earlier age than the average player. I felt that for hitters who began their careers at a younger age, there maybe was a possibility their plate discipline, specifically their walk rates would peak earlier than Petti's plate discipline aging curves would indicate.

One quick side note: A high walk rate does not necessarily equate to above average plate discipline. Petti's research tested other factors (Swing %, O-Swing%, etc.) that are a better reflection of true plate discipline. So the peak age for a hitter's walk rate could be different than age-32. Anyways, for this analysis, I'll simply focus on walk rate.

As Jeff Zimmerman kindly pointed out in the comments of my original piece, taking walk rate (BB/PA) at face value isn't the best idea, because it ignores intentional walks.

Zimmerman showed that Pujols' non-intentional walk rate (NIBB/PA or NIBB%) actually began to decrease after his age-27 season, two years earlier than his BB% would suggest.

My goal for this piece was to compare Pujols' NIBB% over his career against the top-10 hitters in MLB history not named Albert Pujols. I wanted to see if they had a similar early peak in NIBB% to Pujols'.

Unfortunately, intentional walks started to be recorded in 1955, which eliminates a good portion of baseball's greatest all-time hitters.

My goal was to compare Albert's NIBB% over his age-21 to 32 seasons with the NIBB% of those ten hitters over the same age seasons.

**Note**--I had to eliminate Ted Williams, Ryan Braun and Joey Votto from the sample. Williams was left off because he was 36 in 1955. Braun and Votto will both only be 29 in 2013, which makes their career NIBB%s tough to compare.

After those three hitters were eliminated I was left with this sample:

In order to compare these ten hitters to Pujols I created an aging curve.

To create this curve I took the NIBB% for each hitter in their first full major league season after 1955 (age range 21-24) and set that rate as zero. I then found the average difference between their NIBB% in each subsequent season and their "rookie" year: 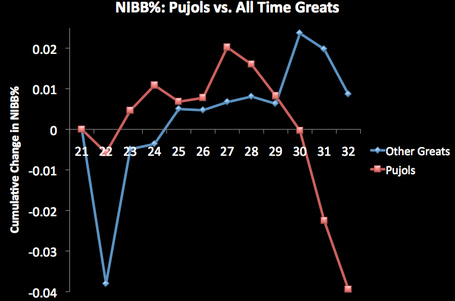 As you can see from the chart the trend for the ten hitter curve is similar in shape to Pujols', with an initial decline before a steady rise and plateau period, followed by a decline.

What really makes this comparison interesting is each curve's peak.

As I mentioned earlier, Pujols' peak came in his age-27 season, while the average peak for the sample I compared him to came in the age-30 season.

Pujols' walk rate began declining while other similarly great hitters were still improving. Thus, it seems that the walk rates of great hitters (at least for these 10) do not peak early, but instead Pujols may stand out again as an anomaly.

The sample is obviously incredibly small, as the analysis was in many ways more fun than anything else.

However, I do think it could be another piece of evidence to indicate that Pujols is not only changing as a hitter, but also quite possibly declining much earlier and more rapidly than expected.

All data comes courtesy of FanGraphs