Throughout his tenure as a front office worker, Theo Epstein has made some pretty impressive moves. His best moves tend to occur when he signs undervalued guys for cheap and then flips them at the All-Star break. During this off-season it appears that he's back to his old tricks once again.

Share All sharing options for: Chicago Cubs rotation: Has Epstein done it again?

During the 2011 off-season the Chicago Cubs acquired Theo Epstein, who was the General Manager of the Boston Red Sox at the time. The Cubs only had to give up minor leaguer Chris Carpenter. Epstein became the Cubs' President of Baseball Operations, and Jed Hoyer was hired as the new General Manager.

One of the first moves that Epstein made was signing free agent starting pitcher Paul Maholm to a one year contract for $4.75 million dollars, and an option for a second year. During his time in Chicago, Maholm accumulated 1.4 wins above replacement, according to Baseball-Reference.com. He also had a 3.81 RA/9, 16% KK%, and a 6% BB%. He wasn't an amazing pitcher by any means, but in a little over half a season he was worth $7 million dollars in value.

For those that don't know, value is calculated by multiplying a player's wins above replacement by $4.5-$5.5 million which what an average player roughly makes. You can also account for inflation, but for our purposes that isn't needed.

Epstein wasn't done though, and he flipped Maholm to the Braves for two prospects. They were 21 year old pitcher Arodys Vizcaino and 25 year old pitcher Jaye Chapman. Chapman is a reliever, and did see some time in the big leagues this past season. He struck out 24% of batters, but walked 20% as well. He only pitched 12 innings, so it's obviously a very small sample size, but the walks are something that he's always struggled with.

Vizcaino is the player that has the highest potential though. He was recovering from Tommy John Surgery and didn't pitch at all in 2012, but he's shown some flashes in the minors. At various levels he struck out over 20% of batters, and has shown a solid walk rate. In a brief stint in the majors in 2011 his fastball averaged 95 mph. It will be interesting to see how it was affected after the surgery.

Essentially Theo Epstein flipped a pitcher that wasn't heavily sought after, and acquired a team's #2 prospect, according to Baseball America.

Na hasn't been that impressive at all, and Cashner showed some flashes during the year.

In 87 games Anthony Rizzo was pretty impressive though. He had 1.8 wins above replacement, and was able to keep his strikeouts under control. Rizzo is 23 years old, and appears to be one of the better young first basemen in the game.

Epstein has made a flurry of other moves as well, but the two main ones that he's made this off-season could return the Cubs some very good value.

The first deal that I will look at is the one year-$5.5 million dollar deal that Scott Baker received. It also comes with $1.5 million in incentives.

Baker throws a four-seam fastball, a slider, a curve, a change-up,and a sinker. Here's a whiff/swing% look at his pitches. 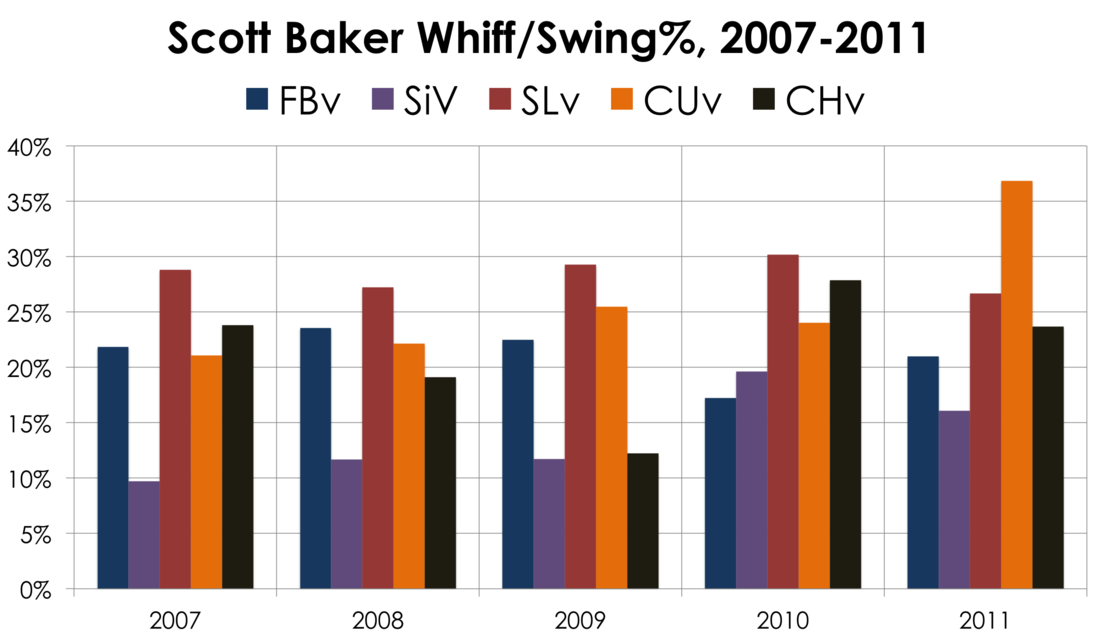 His curveball did generate a lot more whiff/swings than usual in 2011, but keep in mind that he only threw that pitch fifty five times during the season. Besides his curve, his slider and change-up are the other two pitches that have had the most success in terms of whiff/swings. Outside of 2010, Baker's fastball whiff/swing% has remained fairly constant, sitting between 21-23%. 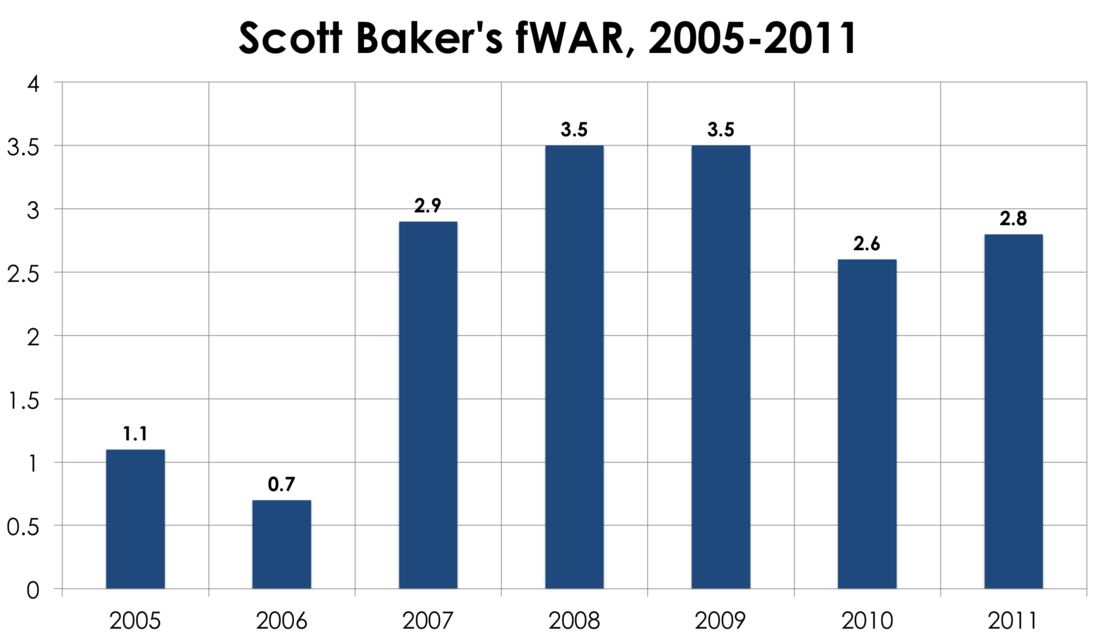 As you can see Baker has had 2.6-3.5 fWAR in each season since 2007, and he hasn't exactly been healthy during that stretch either. In fact, 2009 was the only season in which he made over 30 starts. In 2011 Baker appeared to be headed towards a career year. His 2.8 wins above replacement occurred in only 21 starts, but he missed a chunk of time due to an elbow injury.

Like I stated earlier, Baker signed for $5.5 million dollars and if he bounces back from Tommy John surgery he could provide much more value than that. It would seem likely that Epstein would try and trade him for prospects if that happened, but first we must wait and see.

A couple of days ago Epstein also went out and signed starting pitcher, Scott Feldman, to a one year-$6 million dollar contract. Feldman is coming off of a season where he posted 2.3 fWAR, and it was his second best season since the 2009 campaign.

Feldman doesn't strike out a lot of guys, but in the past he struggled a little when it came to preventing walks. In 2012 he managed to walk only 6% of batters, while striking out a career high 17% of batters.

Feldman is a sinker ball pitcher, but doesn't generate groundballs as often as the league leaders do with his sinker. 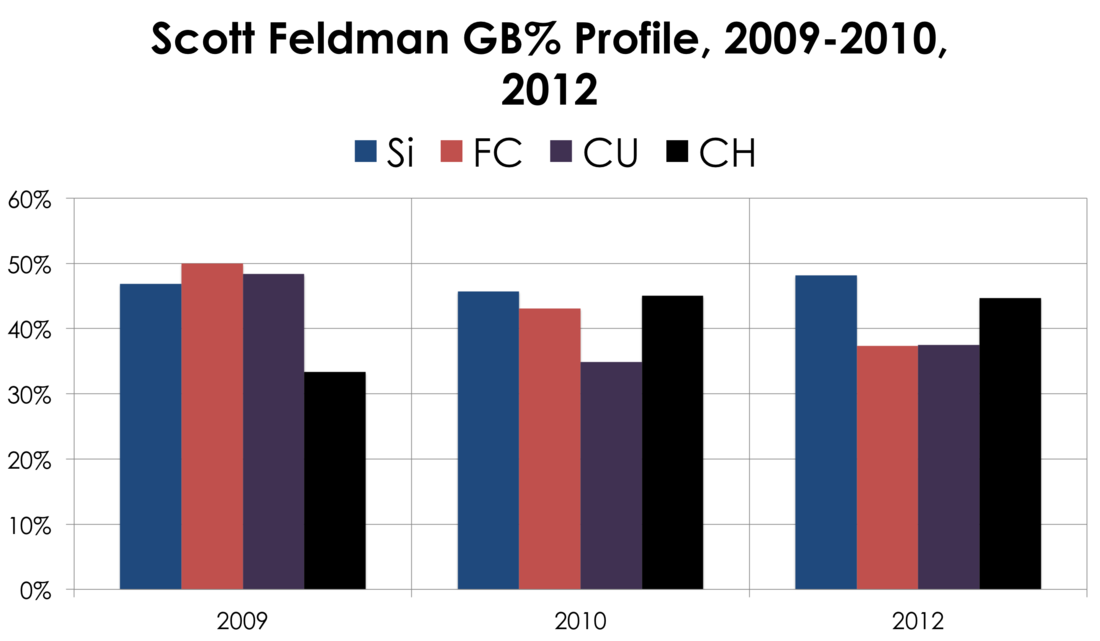 Feldman is signed for $6 million, which isn't too steep, and if he can duplicate 2012 it will be a nice bargain. Again, Theo probably has other ideas though, even if he follows a path similar to Paul Maholm.