Evolution of the Lead-Off Hitter

A look at how the lead-off hitter has changed over the years.

Share All sharing options for: Evolution of the Lead-Off Hitter

In 2012, Major League Baseball fans famously witnessed one of the greatest rookie seasons of all time with Mike Trout in Anaheim. And it was almost embarrassing the way we all fell for him. Quite honestly, what I saw on my tv and on my internet this year could very easily be described as a shameless world-wide man-crush pandemic.

Part of the reason we love Mike Trout so much, I have to believe, is because he represents something we rarely get to witness: The Ideal Lead-Off Hitter. He get on base, he steals bases, he hits for contact and power. A true "catalyst at the top of the order" we hear so much about in broadcasts.

It seems not too long ago, this rare combination of our favorite tools was only the stuff of fables. Especially for the kids who don't even remember Ricky Henderson let alone Willie Mays.

This of course got me to wondering, how has the lead-off position changed over the years?

Predictably, I went to the ol' reliable retrosheet files for the answer. I calculated the Batting Average, On-Base Percentage, Slugging, Walk rate, and Strike-Out Rates of every plate appearance from the lead-off position from each season. I then converted each into a "plus" statistic (that is, a scale where "100" represents league average, anything above 100 is above-average, and anything below 100 is below average) to account for the changing eras.

What I found may shock* you.

There's a lot of information packed into this chart, so I encourage you to take your time with it, examine the trends individually and then together. I'm curious to hear if the trends jive with your memories.

What most surprised me is the generally unchanging state of OBP throughout the eras. For whatever reason I was under the impression that organizations have gotten more hip to the idea of an exceptional on-base type of hitter in their lead-off slot in a post-Moneyball world, but this is apparently not at all the case.

In fact it was the 1990's that really appreciated a patient lead-off hitter. Players like Rickey Henderson, Craig Biggio, Wade Boggs would regularly see OBP's greater than .400 out of the lead-off slot. Even Chuck Knoblauch, Brett Butler, and Lenny Dykstra had some exceptional on-base seasons from the 1-hole.

This trend began falling off precipitously in the 2000's, it would seem, as most of the walks were being allocated to the sluggers in the middle of the order.

Taken altogether, this is how the overall effectiveness of the lead-off hitter has evolved throughout the years according to wRC+ (does not include SB/CS):

Of course, when I was first getting into baseball at the end of the 1980's I remember thinking Vince Coleman was the ideal lead-off hitter. He didn't strike out much, he didn't have much power, but he did run the hell out of the bases. For a long time I thought that's all a lead-off hitter would do. In recent seasons it seems this sort of aggressiveness on the basepaths from the lead-off hitter has been tamed. 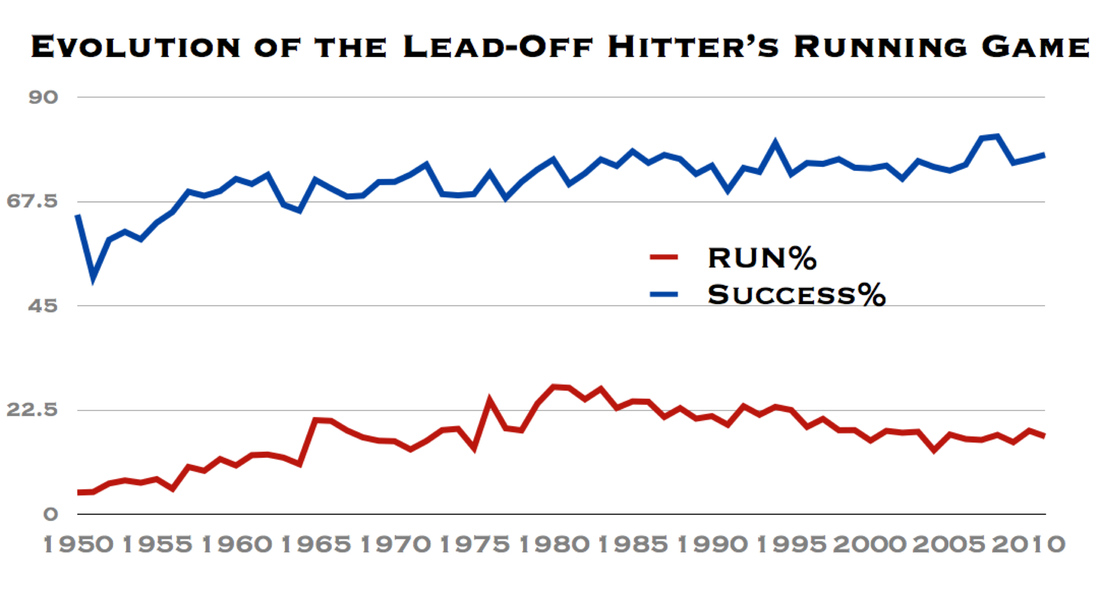 RUN% here denotes how often these players would attempt a steal compared to how often they were on base [(SB+CS)/(H+BB+HBP)]. While Success% is merely how often the players were successful in their stolen base attempts [SB/(SB+CS)].

So yes, lead-off men were certainly far more aggressive on the basepaths in the '80's than they had ever been, and that trend has been dwindling since. And while lead-off men of the '50's and '60's certainly weren't as efficient in their stolen base attempts as they are today, that trend hasn't really improved in the last 30-40 years.

Again, this is a lot of data to process-- what do you notice in these charts that maybe the rest of us haven't?

*Psych, It's not gonna shock you at all, really. Maybe just mildly amuse you at best.

Note: league-averages used did not include pitcher's at-bats and are not park-adjusted.