What can be expected from Alexi Ogando in 2013?

Alexi Ogando is another talented Texas Rangers pitcher that has seen his pitching role oscillate between the rotation and the bullpen. Having been told he will be a starting pitcher in 2013, what can we expect from him this season?

Share All sharing options for: What can be expected from Alexi Ogando in 2013?

Alexi Ogando outlasted an unfortunate involvement with a human trafficking ring, that led to his banishment from the United States for five years starting in 2005. Ogando continued to play where possible during this time, mostly in his home Dominican Republic and in other international events. Finally, in early 2010 he received a visa to allow his entry into the United States.

Ogando attended spring training with the Rangers, and then spent the next couple of months overwhelming minor leaguers at the AA and AAA level before being called up for good in mid-June.

Heading into the 2011 season, Ogando was slotted into the starting rotation to replace an injured Tommy Hunter. The transition could not have worked out any better initially, as he started his season 7-0 with a 2.20 ERA and ended up being named to the American League All Star team. Naturally, life as a starter led to his strikeout rate declining, down to 18.2%, but his walk rate also dropped to a pleasing 6.2%.

In the offseason prior to 2012, the Rangers lost C.J. Wilson to the Angels, but filled in his spot in the rotation by making a big free agent splash, outbidding others to win the rights to Japanese phenom Yu Darvish.

After much deliberation, they also decided to make another reliever-to-starter conversion, attempting to make better use of young star Neftali Feliz by having him throw more of the team's innings.

These moves left Ogando on the outside looking in, so he was shuffled to the bullpen yet again. Despite the change of role, Ogando performed admirably, bumping his K% up to a career high 25.1%, while holding his BB% down at 6.5%. His FIP was actually a career worst 3.73, thanks in large part to an unfavorable 12.3% HR/FB ratio.

Trying to make good arguments for what to expect from Ogando in 2013 is a difficult task, given that this will be his third straight year of changing roles on the Rangers' pitching staff.

I will look at a few categories in an attempt to assess his potential as a starting pitcher in the coming season.

According to BIS and Pitch F/X data, Ogando throws primarily two pitches: a four-seam fastball and a slider. He will throw a changeup as well as a third offering, but even when he started all year in 2011, he threw it only 4.3% of the time. While working from the bullpen again last year, he dropped its usage even more to only 1.7% of his pitches.

While relievers can often succeed with a two-pitch arsenal, starting pitchers tend to throw a larger variety of pitches. This serves to give batters different looks and force them to keep more possibilities in their mind as they stand in the box to face the same pitcher multiple times within the same game.

As a point of reference, consider the following chart showing the number of types of pitches thrown by all qualified starters in 2012: 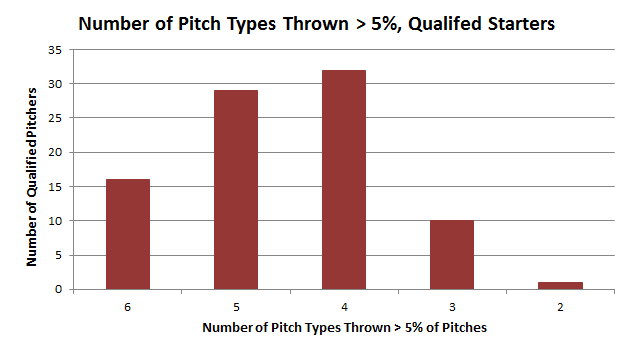 The only qualified pitcher from the past season that threw as little as two pitches at least five percent of the time was NL Cy Young winner R.A. Dickey.

Even if we increase the threshold to pitch types thrown at least 8% of the time, only Ervin Santana used as few as two pitches of all qualified starters in 2012. So while it is not without precedence to succeed as a starting pitcher while throwing such a narrow range of offerings, it certainly helps if one of those offerings is an unbelievable knuckleball.

I would expect that the Rangers will work with Ogando on developing his changeup in the offseason, or if not then adding another type of pitch to his repertoire.

While he has shown success as a starter with this limited variety of pitches, it would appear over the long term he is going to need a third pitch that he feels comfortable throwing more often that he has to date at the major league level.

Ogando throws the ball harder than almost all other pitchers. In fact, as a starting pitcher in 2011, his average fastball velocity of 95.0 placed him first among all qualified pitchers in that season. As expected, as a reliever his average velocities were even higher in 2012:

He noticeably increased the velocity of his slider in 2012. This may have only been possible due to his shorter outings from the bullpen, but this will be an interesting statistic to monitor in 2013.

Ogando will be entering his age 29 season, which means that he should be expected to lose some velocity this season compared to last, according to pitcher aging curves.

However, Ogando is difficult to place on the curve for a couple of reasons. He has alternated between the bullpen and starting rotation, so we cannot directly apply an average year-over-year reduction to his numbers. Also by having played his pre-major league ball outside of the regular channels, his pitch quantities leading up to his age 29 season may or may not be similar to the average pitcher of his age.

If we go by his last season as a starter in 2011, and project two years forward to 2013, it would appear that on average we could expect his fastball velocity to drop by around 0.5 mph from his 2011 levels.

Certainly he will still be among the hardest throwing starting pitchers in baseball, a skill that will assist in masking potential shortcomings in the number of pitches that he throws.

If we look at the hardest throwing qualified pitchers from 2011, the last season that Ogando started, we can see that he measures favorably against his fireballing peers when it comes to limiting walks:

Only Justin Verlander posted a lower BB% of the top ten qualified pitchers in fastball velocity. Of course Ogando's K% was among the lowest in this list as well, a metric that may have limited upside as a starter until he is able to develop a more effective third pitch in his arsenal.

Ogando varied the release point of his offspeed pitches much more as a relief pitcher in 2012 than in his season as a starter in the year prior, as can be seen in the following release point graphic:

While a less repeatable release may not be ideal from a pitching mechanics perspective, the fact that his fastball is now less differentiable out of his hand from his slider (and occasional changeup) should be positive for Ogando. When he threw more over the top in 2011, it was always a fastball. In 2012, the same cannot be said, as he threw all three pitch types more over the top at times. I believe maintaining the ability to not allow hitters to determine what is coming just based off of a release point will be important for his long term success in the league.

Quantity of Pitches, Risk of Injury

The shifting between relief and starting pitcher roles has led to a drastic change in the number of innings thrown by Ogando over his three seasons in the league.

The Rangers apparently did not set any innings or pitch count limits on Ogando in 2011 as he transitioned into the starting rotation, so I would suspect that they would at least make the same claim heading into 2013.

The Rangers have previously had success at converting C.J. Wilson to the starting rotation, increasing his innings pitched total from 73.2 to 204.0 in one season with good results and no injury issues. Last season, they converted Neftali Feliz to the rotation, with somewhat less favorable results over a month and a half until his season was cut short with an injury requiring Tommy John surgery.

Every pitcher is different, and likely pitching mechanics plays the largest role in a pitcher's ability to stay healthy. Strength and conditioning will also be important, and Ogando has the luxury to have more notice heading into the season that he will be expected to start than he did in 2011 when Hunter was injured in spring training.

That said, Ogando did experience some discomfort in his biceps late in the season last year. He also throws almost completely fastballs and sliders, and throws both of these pitches harder than the average pitcher. Through recent research that I have done on pre-Tommy John surgery, I can say that there are studies that indicate a positive correlation between pitch velocity and elbow injury.

Of course there are many pitchers that throw harder than average who remain healthy, so this is merely to point out that such a correlation exists. The Rangers will certainly be aware of much more information regarding Ogando than anyone else, so will manage his usage as they deem fit in 2013.

Alexi Ogando has two very strong pitches in his repertoire, that have proven to get hitters out at the major league level. He throws the ball very hard and has shown the ability to limit walks, a rare combination. I suspect the Rangers and Ogando will work together to try to gain comfort level in a third pitch for 2013, which may be the changeup that he has thrown occasionally to date or a variant of his fastball. If he can augment such a third offering, and stay healthy, he should have the all the tools in place for a very successful 2013 season.